Anchor Tests
Thanks for your continuing series of articles on anchors. As a fellow anchor-tester, I appreciate the time and effort that goes into meaningful tests.

As will no doubt be apparent to Practical Sailor readers, I am hardly an independent observer on this topic, having worked for West Marine for almost 20 years. During this time I have sold many of the products which you included in your test, and have participated in many anchor tests. I have been deeply involved in the development of West Marines line of anchors. I bring this up in an attempt to anticipate accusations from your readers that I have a vested interest in this subject. Its true, I have a very vested interest in the subject!

Having said that, I would like to comment on your second article, 15 Anchors Tested for Holding Power in Sand (January 1, 1999). The results of tests which I have observed are reasonably similar to your findings. Until recently, I had not tested the Spade, but my curiosity was piqued by the many comments from my cruising friends around the world which indicate that it is gaining popularity and appears to have the positive qualities you identified. As a result, West Marine obtained two versions of the Spade for testing, and I have included those results in my comments, which follow.

We have found the single point anchors like the Delta and CQR to be more stable and effective in varied bottoms due to the absence of yawing caused by asymmetrical loads like those which can occur with Danforth-type and other multi-point anchors. This is especially true in sand with rocks or randomly strewn junk. Danforth-type anchors with the traditional wide stock do appear to be more stable, and reduce rolling out of the bottom, just as Robert Danforth Ogg, the inventor, has always claimed.

When we tested an otherwise great performing European Danforth copy, we were surprised to see the entire anchor emerge from the bottom, stock vertical, after being thoroughly buried for several feet!

I also concur that the Delta anchor appears to out-hold the Bruce-type anchors by a wide margin. Using an 11-lb. Bruce and a 14-lb. Delta in the sand off Santa Cruz, we consistently registered 320 lbs. of tension on the Bruce, and about 1,100 lb. on the Delta. The Bruce, we later determined, never completely buried, and simply plowed the sandy bottom with its retrieval hole upward. Adjusted for the difference in weight, that would give the Delta an almost three-fold advantage. (Note: this is based on adjusting the weight by the 2/3 power, which is commonly used to equate anchors of different weights to correct for the difference in surface area.) A second test of the Bruce two years later in the same location produced tensions ranging from 260 to 300 lbs.

Our testing confirms your observations regarding the Digger, the Nautical Engineering Titanium, the Hans-C and the Box anchor. While many of these anchors have attractive attributes (lightness, design concepts, low cost), we have been unable to get them to work in West Coast sand bottoms. We, too, look forward to hearing from your readers who may have observed different results.

Our tests of the Bulwagga were mostly positive. It appeared to set quickly, hold well, and veer well. The primary reason we chose not to carry it was based on the issue which you raised: Its interesting design makes it inappropriate for many anchor storage systems. We also noted that the upturned third fluke acts like the unburied fluke of a Northill or Yachtsmans anchor, and is just asking to be fouled by the anchor line.

We have broken and bent many anchors during the course of our tests, and in fairness to the manufacturers, I dont want to malign them in print. I will say, however, that straight-line holding power, which is achieved by large surface area without the requisite structural strength to insure that the anchor remains in its intended shape, is a dangerous combination. Several anchors in our tests have held well initially, but failed when the tension increased modestly, or when the anchor veered and then was pulled for a second time. A massive anchor like the CQR or Delta or Bruce may have less holding power in tests like yours and West Marines, but over many years I can remember very few anchors like the Bruce, Delta, CQR or West Marine Performance which have been returned with bent shanks by customers, and you can be certain that those that were returned were winched aboard by over-zealous windlass operators.

The Spade may possess the best of both worlds: structural strength and high holding power. (I am reminded of a story told to me by Peter Bruce during a visit to West Marine. I asked him about the trade-off between holding power and structural strength. He replied that he never wanted to be a defendant in a product-liability suit where he looked over at the prosecutions evidence table and saw a portion of one of his anchors lying there. If they have lost the anchor, they have no evidence he said. If they have a perfectly good looking anchor, they have no case. But if they have a portion of an anchor, I will surely lose.)

I was surprised by the relatively poor showing of the Danforth-type anchors, including our own Performance2 anchor (for obvious reasons), the aluminum Fortress anchor, which in my experience invariably holds the most, and the Danforth Hi-Tensile anchor, which was the anchor on which I based the design of the West Marine Performance anchor. The Danforth Hi-Tensile is one of the few anchors (like the CQR and Bruce) that has such a strong following among serious cruisers that one has to be careful about one-test conclusions. Oh well, anchor tests are anything by consistent!

Last week, I was finally able to test the Spade anchor in both its aluminum and galvanized steel variations. I dont know the weights, but the alloy version was stamped A40, which refers to its surface area if I am not mistaken. As with most of our tests, we pulled the anchors from the stern of our powerboat, which is a Fortier 26 with a 170-hp. Yanmar diesel engine. Both anchors set immediately, and held over 1,000 lbs. of tension each time we tested them. After pulling on both samples, we slacked the anchor line and pulled from a direction which was approximately 60 from the original direction, as if the boat had suddenly veered. While we were able to put a slight bend in the shank of the alloy anchor, both anchors held to over 1,000 lbs. of tension. (For safety reasons, and to keep from damaging our boat, we limit our tests to 1,000 lbs. of tension. The anchors never dragged.) My verdict: Very promising.

In the same test, we pulled nearly identical 8-lb. Danforth-type anchors: our popular Traditional 8, and a Chinese copy that was forwarded to us for testing. A cursory examination indicated that the Chinese model was an almost perfect copy, and had there not been a label on our Traditional 8, we could have mixed them up. Testing, however, proved that the Devil is in the details. The West Marine Traditional 8-lb. held twice to about 600 lbs., and twice to over 1,000 lbs. The Chinese copy never held more than 60 lbs. and we suspect most of that was due to the 20′ of chain dragging on the sand bottom. We tried to set both anchors four times. Our anchor set each time, and the copy never set. Upon further examination, the copy was slightly different in some critical dimensions that we had overlooked in our first examination. That is exactly why Ogg was such a stickler on the precision with which anchors have to be manufactured in order to work properly.

Finally, I think it is important to note that anchor pull results are greatly affected by the condition of the bottom on a micro level. That is, the very act of dragging anchors through the bottom changes its ability to produce high holding powers, because the sheer strength of the material is altered as it is disturbed. I seem to remember that one of the great anchor testers of all time, the late naval architect Robert Smith, used to fan out his test pulls to attempt to test in relatively undisturbed bottom conditions. While the seabeds of the world are wondrously varied, and while anchors seldom see identical conditions, it is important (and nearly impossible) to maintain identical conditions when testing anchors.

Thank you for continuing to bring helpful comparative product information to boaters. While we may not always agree, I think PS provides a tremendous service for all of us.

We have taken considerable pain to fan out the various pulls so that each set and pull is conducted in a bottom that is as undisturbed as possible. Even that, however, doesnt guarantee identical conditions.

The letter from Earl Hinz included a most cogent observation. I was reminded of a truism about seamanship: There are more sailors than there are seamen (anon.).

Some of the devices tested could just as well be cataloged under reinventing the wheel. Modern day yachtsmen demonstrate a propensity toward the latest offering on the market and especially when it is promoted as lightweight, high tech, etc.

Just as all that is new isnt bad, all that is old isnt good. The true Danforth has a well-earned place high on any list, but it is not so good on weedy bottoms. The tinny, lightweight knock-offs of the type are just that. Would you use one on a shingle (gravel) bottom?

The Bruce is another with a well-earned ranking near the top, but in my experience it also likes to slide on grass and seaweed and is not too happy when its charge is moved about by tide, current or wind. Its knockoffs share an important marketing advantage: no moving parts. They cant squeak, rattle or clank in the night. Neither can they pinch a pinkie. The true CQR is, in my book, an excellent choice, an all-round good anchor. The spade appears to be a cross between the plow and the Bruce. It performed well in your test regimen. How does it behave when conditions are shifting the boat all over the anchorage? Will it stay as well as a CQR?

You missed what in my book is a proper, all-around anchor-the Forfjord. The Seadog version is available from places like Fisheries Supply in Seattle. It is a favorite with commercial fishermen in the Northwest, where wind, sea and tide will forcibly move the boat in all known directions and where the bottom may be anything from soft to shingle to rock to weed. It is a stockless type but with flukes spread open. Thus it stows nicely over a roller fairlead at the stemhead. Its worth its weight as a #1 bower, but I would also carry a #2 plus a stern, which would probably be a Danforth and double as the lunch hook.

Since you published your anchor test article, we have had on our fax 011-216-3-447-910 and telephone 011-216-3-447-909 many inquiries about Spade anchors. We are trying to arrange for a US distributor. But in the meantime, it might be easier for your readers to use our Web address: http://mars.rever.fr/spade. For information, in both English and French, you can also use our e-mail address-ancre@aol.com-to communicate with us. 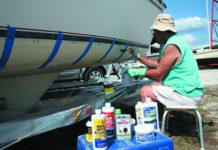