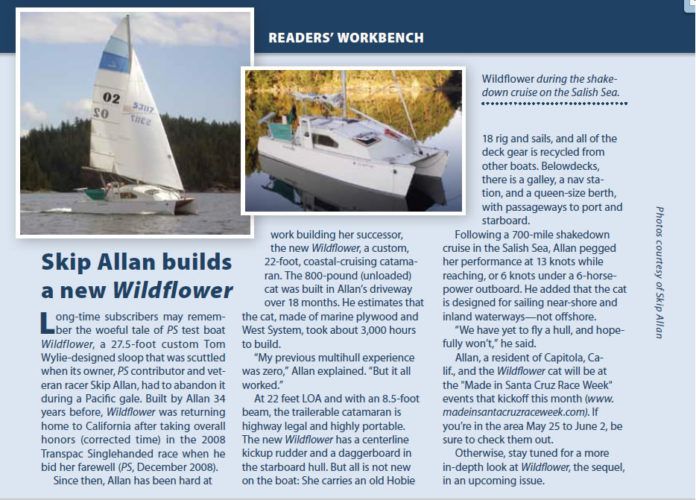 In regard to your review of portable seats (PS, March 2013): Be careful! We purchased a low-cost, but works-well folding cushion seat (don’t remember the brand) and stored it in the aft cabin. For a while, we could not figure out why our autopilot steering was way off. It turned out that the fluxgate compass for the autopilot was located under the aft-cabin bunk. The folding seats frame was magnetized and threw off our compass. We now store it in a different location.

I am writing in regard to the small anchor reset test (PS, February 2013), and would like to address some omissions related to the Rocna anchor.

Given your publications reputation for unbiased reporting, we feel it a privilege to have this opportunity to express ourselves relative to this specific test, which we believe was conducted outside of generally accepted independent testing standards.

The surface area-to-weight ratio of an anchor is a key performance indicator, with particular relevance to holding power in soft bottom types, and is one that Rocna has taken particular care to maximize. Given that the author apparently recognized the value of presenting this ratio, it is puzzling that the Rocna is the only anchor for which this is not calculated. This omission is even more surprising considering that unlike most anchors, the surface area of the Rocna blade is included on the label of the anchor, in our literature, and on our website. Had the author chosen to present this ratio for Rocna, its ratio of 98 would have been the highest of the anchors tested.

The results of any anchor testing are strongly influenced by the seabed type. Although the table in the article includes results for two seabed types, once again the Rocna was singled out for omission with results reported for only for the sand/clay seabed, and no data for the sand seabed. Our expectation is that the Rocna would have set quickly and performed well in this seabed.

As the author noted, typical tidal or veering wind situation occur over an extended period of time, rather than presenting sudden 180-degree load reversals such as were used in this test. Based on our testing and the experience of thousands of cruisers worldwide, the Rocna design handles real-world load reversals extremely well, and will typically remain buried and rotate in place.

It is notoriously difficult to perform reliable and meaningful anchor testing, particularly with a large number of test anchors. To achieve statistically meaningful results requires large numbers of repetitions of each test condition, seabed, and anchor type, resulting in a huge amount of data. Most testers do not have the time or resources to provide this type of rigorous testing. Some of the results in this article are based on only two pulls, and the author noted that results outside the norm were discarded without defining what objective criteria was used for this data selection. Based on these concerns, the statistical validity of these results can certainly be questioned.

There are many factors that would lead a boater to select a particular anchor type. We urge those who are considering their choice of ground tackle to base their selection on feedback from users as well as independent tests, rather than on a single criteria.

We regret the omission of the surface area-to-weight data for the Rocna; the table will be updated online. The main purpose of the test was to evaluate veering performance based on anchor type and to establish baselines for further testing in the two-part series on shank strength, which concludes this month. As stated in the veer-test article, we do not regard it as a definitive analysis of overall anchor performance. Based on the performance of the Rocna in the beach testing-and the general correlation of our beach testing data to what we found on the boat-we can assume that the Rocna would perform similarly in on-the-water testing.

I just purchased a product that is intended for home use but works perfectly as a boat leak sensor. Sky Link offers a remote-sensing water-leak detector for use with water heaters, washing machines, and the like. A waterproof sender is activated if water makes contact, and the sender is wired to a small transmitter that sends a signal up to 300 feet to a receiver that is connected via 12 volt to an AC-DC adapter plugged into a wall outlet.

This is an ideal system for those of us who have our boats docked at home. My sloop is docked about 200 feet from the house, and the Sky Link receiver is located in the house near a window. The sensor is mounted in the bilge with the transmitter located on a bulkhead. In tests, the unit performed perfectly.

I have my mast down on my 1984 Seafarer 30 to do some maintenance. Its a convenient time to take out my chainplates, give them a good looking over and re-bed them.

One thing Practical Sailor is fond of pointing out is that stainless steel can give out with essentially no warning. Im not quite sure what to do with this information. Ill look at my chainplates for obvious problems, but if they might spontaneously combust anyway, Im hardly going to be re-installing them with confidence. Would replacing them as a precautionary measure be overkill?

Replacing seemingly healthy chainplates simply as a precaution is unnecessary. Stainless chainplates are usually designed with a safety margin much higher than the standing rigging, and they typically will show some sign of degradation-weeping, pitting, etc.-before they fail. The best precaution you can take is to inspect them regularly. When in doubt, hire a qualified rigger or surveyor. Inspection is difficult-or impossible-if chainplates are buried in fiberglass. Its a good idea to create easy access to the chainplates, if it doesn’t already exist.

For more on chainplates-failures and replacement options-and marine metals, check out the December 2011, February 2007, and Feb. 15, 2005 issues.

Is it possible to get Practical Sailor articles uploaded to my Kindle or other e-reader?

Subscribers can download a PDF of each issue at www.practical-sailor.com, and then upload the PDF to the laptop, digital tablet, Kindle, or other e-reader of their choice. Youll find a full listing of downloadable PDFs in the back issue archive.

The April 2013 small anchor test article was well written and scholarly, which I appreciate-of course, I am an engineer, which could explain a lot. I did have some questions: 1) How would one of the spade anchors react to a side load if buried in sand or mud? My theory is they would probably pull out before the shaft bent. 2) Is it realistic that a load from an anchored boat would ever be at 90 degrees to the shaft? My theory is that there would be some component of load less than the measured 300 kilograms load on your test boat.

These are just the questions that we sought to answer in our anchor article this month. See page 12.

In response to your December 2012 broadband radar comparison: I switched from a Simrad BR24 broadband unit to a 4G after eight weeks. I just never developed the radar trust needed to run to the tuna grounds through Nantucket Sound and Great Pollock Rip in the fog/dark at 25 knots with the 3G BR24. We trust the 4G with our lives.

Your review only briefly mentions the fluxgate compass. In my experience, it is a critical addition to the system, allowing the radar returns to be overlayed onto the chart, as shown in the screen shots you featured. Too bad you did not get to test the split-screen 4G radar. It is a big improvement, but the fluxgate is required to get the most out of it.

We run a half-screen setup in the dark, with radar only on one side, fast scan-beam sharpening, -mile range, and we can mark lobster gear buoys. The other half of the screen is radar overlaid on the chartplotter with routes and waypoints displayed, 2.5-mile range; we can look for boats and navaids and watch our cross-track through high currents and rips.

The red radar overlay can sometimes mask red nav aids on the chart display, if the radar returns opacity is set too high. The only alternative color is an alarming magenta.

Final thought: Although the gray/white 4G antenna may appear to have some built-in wedge to it, the antenna sits parallel to the base mounting plate inside the dome. Simrad 4G radar antennas come with very specific instructions for mounting heights above hard tops to prevent beam masking. I had to raise the antenna 8 inches and add 4 degrees forward pitch to get the best performance.

The caption for the photo of the bent Rocna shank in the April 2013 issue (page 17) should have indicated the bending load was about 230 kilograms (506 pounds), not 230 pounds.

Reader's Workbench
Where Credit Is Due