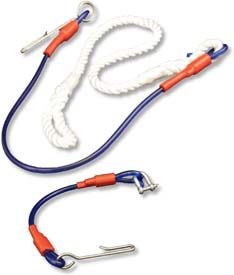 Surfers will relate to these new snubbers from Tommie Springer in Australia, even though they haven’t reached U.S. stores. They are made of the translucent polyurethane blend used to make surfboard leashes. PS examined the large Original Springer, designed for snubbing 3/4- to 1-inch anchor or mooring lines, and the large Mooring Line Compensator, meant for snubbing 3/8- to 5/8-inch dock lines.

The Original has a short length of nylon at one end for securing at the bow. The Compensator has a shackle at one end for connecting to a loop of chain or rope to a piling or dock (or the boat). Both are suggested for boats up to 28 feet and winds to 25 knots. There is an “X-large” size for bigger boats.

A novel hook at the opposite end of each snubber clips easily over twisted three-stand line (it will also hook chain, but it isn’t meant for braided line). Once in place, the hook supposedly won’t slip. We tested these devices to 200 pounds of tension. The more elastic 3/8-inch Original stretched from 3 feet to 13 feet, and then returned to 4.5 feet unloaded. The 1/2-inch mooring compensator stretched from 21 inches to 44 inches and then went back to 23 inches. Both retained plenty of elasticity, but some of the Original’s cord had slipped through the pressed ferrule that forms the eye where it connects to the hook.

Based on this test, we think the thicker Compensator, which begins visibly stretching at about 20 pounds of tension, is better suited for both applications. The hooks appear to be an improvement over conventional elastic snubbers that are threaded onto the snubbed line, but we are curious as to how well they grab three-strand lines of different sizes and lay. We will be testing this when we put these into use for further observation.

The company has a very basic website for ordering in Australia, where the large Original sells for about $70 and the Compensator for about $55, at current exchange rates. The company will take international orders by phone.