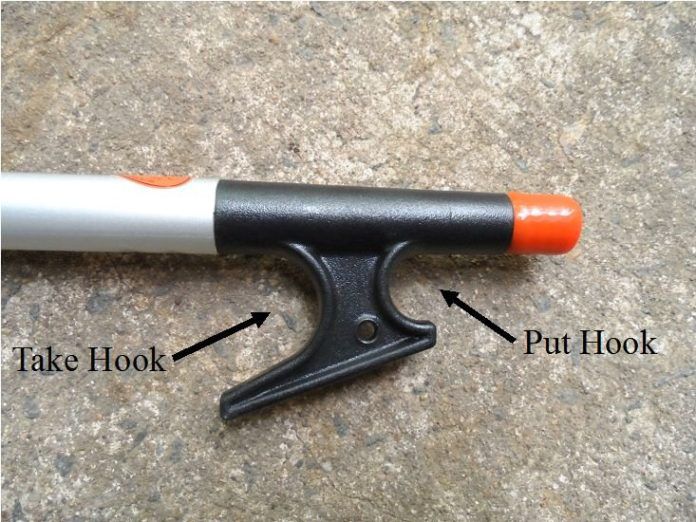 We recently wrapped up a comprehensive test of boathooks for Practical Sailor. You can see that full report in the November 2016 issue, which will be published in print and available online next week. For everyone else, we offer here our initial observations from that test.

All of the poles we tested are strong enough to withstand normal use, but if you step on them over a gap or on a catamaran’s trampoline, they will bend. One-piece poles can generally be bent back. Telescoping poles, once bent, are generally toast.

Most models come with put-or-take hooks, featuring a secondary horn of variable size pointed forward to facilitate placing a loop over a piling (put), as well as the standard aft facing hook (take). If either hook is too large, it can make it harder to it slip under a line thats laying flat on a dock, one of the many tasks that a boathook is expected to perform.

Our first surprises came when we began pull- and push-testing the telescoping hooks. Only one pole consistently held firm under load. All the others slipped at loads between 100 and 185 pounds. We then tested them in compression. Most of the poles could manage 170-pounds of compression, although a few telescoping poles slipped.

Even more surprising was the effect of hard pulling on the unbreakable tips. The hook on one pole began to bend at about 100 pounds pull. Another bent dramatically to one side, the plastic turning white, clearly in distress, and in later testing, snapped off completely. About half the hooks we tested held past 120 pounds of pull.

With the exception of one boat hook we tested, metal hooks are gone, replaced by unbreakable plastic hooks. The new plastic hooks are certainly safer when fending off, but when we tried to pick up lines off a dock we were disappointed. Only two boathooks we tried could pick up a -inch line with the tip or the hook. The hook design from one manufacturer could do this with the hook-but not the tip. All others failed completely; their hooks were too bulbous to slip under a line.

All the hooks we tested came with 5/8-inch Acme threads on the tip-the same thread used in most brooms, deck brushes, and paint rollers. This was meant to take threaded accessories. However, a couple tips simply could not accept a common deck brush. The location of the hook prevented the brush from being rotated onto the threads. On other hooks, the threads simply didn't match those on the brushes we had on hand. Check your accessories before you buy.

But even when the brush fit well, testers found boathooks provided only mediocre service as a brush handle because the hook part had a nasty habit of snagging lines when scrubbing a deck, and many poles were awkwardly long. In addition, caps that cover the threads are easy to lose. As much as Practical Sailor likes equipment that does double duty-the scrub brush/boat hook doesn’t thrill us like some other multi-purpose tools do.

The good news of plastic tips is that none of them left any mark, other than the slightest heel mark, and this was only on oxidized gel coat. Some of the poles have soft rubber coverings on the tip to prevent them from sliding. This did provide additional grip on smooth stainless-steel railings, but the soft coverings eventually failed with heavy use.

Not all of the poles float. One of the heaviest poles in our test floated for just 15 seconds, and that was when it was fully extended. Collapsed, it sank like a brick. One of our best floaters stayed up for five minutes, even when compressed.

Weight has a considerable affect on the manageability and utility of a pole. Although you might be tempted to get a longer pole, try reaching horizontally with it before buying. The longest pole in our test was 14 feet, and it was markedly heavier and more unwieldy than others in the test. Our smallest tester had difficulty holding it horizontal. For some, a 14-foot pole-versus the standard 12-foot-is no better than guitar amp that goes all the way to 11.

In our final test, we deliberately bent the poles, and all but one of them bent back into shape without interfering with their functionality. The one pole that failed crimped so badly that the telescoping mechanism no longer worked. Surprisingly, this was a pole that testers thought would hold up best in the bend test, based on the pole’s rugged appearance.

In our field tests, we had problems-mostly minor-with most of the collapsible poles. Nearly all of the twist-lock mechanisms became slightly stiff with lime deposits and minor corrosion. A quick wipe and rinse with vinegar solves the problem, and this should be considered seasonal maintenance. All of the poles from one manufacturer jammed after prolonged exposure to water. In some a couple cases, the jammed poles hadnt even been exposed to saltwater-just fresh.

Our biggest takeaway from the test? In the end, our testers concluded that a 12-foot fixed-length boathook is the best fit for most mid-size cruising boats. Smaller boats will do fine with a collapsible pole, or an eight-foot length, but when you really need a secure grab or a big push, a basic fixed-length pole is reassuring, and the 12-foot pole is a good compromise between reach and weight.

For a detailed comparison of the many boat hooks we tested, see the November 2016 issue of Practical Sailor.