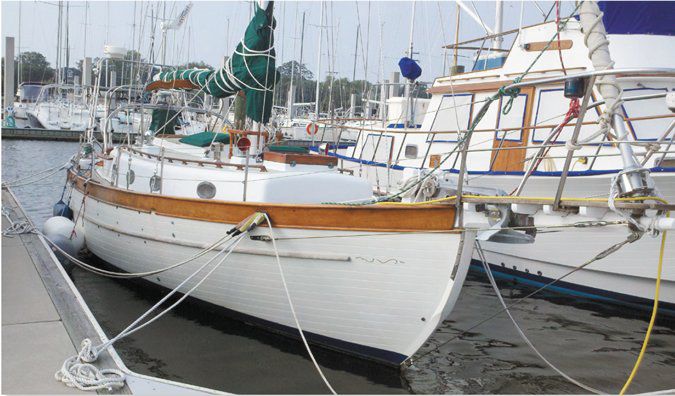 With regard to your July 2016 article on storm preparedness and spring lines, what advice is there for storm prep for floating piers? We are in a slip with a 36-foot boat, and there is no way to cross-tie to pilings across the slip. Also, there are no cleats at the head of the slip, only on the finger pier.

Bear in mind that a marina would be one of our last refuges in a named storm. Our first choice is a haulout facility, preferably well inland and out of the path of the storm. The facility shouldnt be vulnerable to storm surge, and it should be equipped with fixed tie-down points. Our second choice would be a hurricane hole with good holding, again well inland and out of the storms path. Be sure to read the recent blog post , Preparing a Marina-bound Boat for a Tropical Storm, for tips on securing your boat in a marina when you have exhausted all other, safer alternatives.

The article you refer to, Spring Lines for Storm Preparedness (PS July 2016), was prompted by a search for a simple formula for calculating the amount of slack required for fixed docks. Because your boat will remain at dock level, following our guidance for 1- to 3-feet of tide should offer adequate slack under normal conditions. Being side-tied to a finger pier, as you describe, is similar to the scenario, described in that article, in which one bow line and one spring line have broken. You can use the load data we calculated for that scenario when sizing lines. We would also triple up on fenders, and explore every option for securing the bow and stern (trees, telephone poles, etc.). If theres no other recourse for securing the opposite side or bow of your boat in a storm, you could try setting out anchors, although holding is typically terrible in marinas.

All other things being equal, a well-engineered marina with floating docks is generally preferred over one with fixed docks in a storm. This assumes that your marina is a modern one, with anchor pilings designed to withstand storm surges.

In coastal areas that are vulnerable to coastal storms, pilings of at least 18 feet is the norm-the higher the better. While some coastal areas are less susceptible than others to storm surge, Galveston Bay is not in that category-as Hurricane Ike in 2008, with 18 feet of storm surge, proved with devastating effect.

It is worth noting that in your area-and others like it with funnel-shaped estuaries-moving the boat inland can actually expose it to higher storm surge. If you take a look at the National Oceanic and Atmospheric Administrations computerized Sea, Lake, and Overland Surges from Hurricanes (SLOSH) modeling for your area, youll note that the estuaries inland of Morgans Point will experience dramatically more surge than Galveston Island and other barrier islands. However, this does not mean the islands are a safer place to moor. In Hurricane Andrew (1992), a boater died pursuing the barrier island option.

All this is to say that if a serious storm threatens your area, no amount of tying off is guaranteed to save your boat.