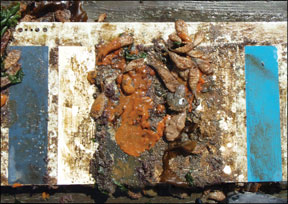 The number of marine antifouling paints on the market today is nearing the century mark. We just finished applying 72 paints to our latest set of test panels. Rather than many new, nationally advertised and marketed products, we are seeing paints targeted at specific types of boats or niche markets. A number of the new paints are aimed at specific regional markets.

While these niche paints should help simplify the task of choosing the right bottom paint for your needs, the result is often the opposite. To help alleviate consumer confusion, Practical Sailor publishes semi-annual reports and ratings for bottom paints. This report focuses on test panels that have been in the water for one year. On pages 16 and 17 is a discussion on another set, which has reached the end of its two-year term. The newest crop of paints, including some experimental, copper-free concoctions (see story, facing page), will be covered in an update early next year.

Most of the information a buyer needs is in the tables on pages 14-17. The tables covering the one-year-old panels (pages 14-15) have been divided into hard and ablative/copolymer paints. The table for the two-year-old panels has been whittled down to the best 20 paints (page 17). If you are looking for the longest possible protection from hard growth, refer primarily to the story and tables covering the two-year paints. If you want the cleanest bottom for up to a year, the one-year table is a good guide.

Keep in mind that the highest-rated paint might not be the best for your situation. For example, if you plan to haul out and repaint every year, opting for an expensive multi-season paint will be a waste of money. The paints we test generally fall into one or more of the following major categories:

Ablative paints that wear away through use, exposing a fresh layer of biocide and reducing the build-up of paint.

Hard paints that can be loaded with copper and resist scrubbing but build up in layer-cakes.

Single-season paints that are formulated for seasonal boating.

Multi-season paints that are aimed at year-round boaters.

Racing paints that are slick or can be polished to a smooth finish.

Water-based paints that are easy to apply and clean up and are less harsh on the environment than solvent-based paints.

Eco-friendly paints that have low or no metal-based biocides and low VOCs. (These are usually compatible with metal hulls as well.)

There are other niches, but they arent as relevant, in our view. Among the paints on the one-year panels, editors were able to flag at least one Recommended paint of each major type. In the two-year-old batch, some niche paints didn't make the Top 20 table on page 17, but the best two-year performers by type are listed at the top of page 16.

A key step when choosing a paint is to check with the manufacturer whether it is compatible with the bottom paint last applied, or whether special prep work is needed. Several makers have on their websites compatibility charts and advice for mystery paints. If you plan to haul and relaunch, be sure the paint will not lose its punch during storage.

The choice between a hard or ablative paint has less to do with effectiveness than with how the boat is used and maintained. Hard paints tend to have a smooth, tough finish that stands up well to frequent scrubbing or can be burnished for reduced drag. The downside to a hard paint is the build-up of paint layers over the years. Eventually, it will become necessary to strip off this old paint and begin again.

Ablative/copolymer paints wear away over time, exposing a renewed biocide-rich surface. Water friction promotes this process, so it works better if the boat is used regularly. These types of paints vary widely in hardness. Usually a pressure wash is sufficient prep for recoating, but some of the harder copolymer paints could require a hard sanding or even eventual stripping to maintain the bottom paint at an acceptable thickness.

Every summer, we paint two new sets of fiberglass panels. Panel and paint prep have remained the same for years: New polyester/fiberglass panels are washed with a de-waxing solvent, sanded lightly, and then hand washed with solvent. Panels are then taped into sections and applied following the manufacturers instructions. Testers rate the paints with no reference to the paint name or manufacturer.

The finished panels are mounted in salt water close to the waters surface to simulate paint near a boats waterline. One complete set is secured to a dock in a saltwater canal in Tavernier, Fla., in the Florida Keys. The other set hangs from a boatyard dock in eastern Long Island Sound (Groton, Conn.).

Occasionally, some paints rated Fair move up to a Good rating in a subsequent evaluation as the other paints lose their resistance to soft growth. Editors identify overall winners and the top paints in the various categories. If some similar paints score equally in both locales, the lower-priced product is favored. Editors search the Web to find the lowest price for each paint so they can be compared on a per-dollar basis. However, prices can change without notice, so we recommend checking before you buy.

has generally found its field tests to be consistent with the panel results, but antifouling effectiveness can vary from boat to boat, year to year, and place to place. How frequently a boat is used (particularly among some ablative paints) and the variety of marine organisms present in a specific area can affect performance. We encourage readers to supplement our data with reports from local experts and other boat owners in your area. We welcome e-mail reports from the field; send to practicalsailor@belvoirpubs.com.

As our two-year-old 2006 panels were rated and sent to their final resting place, they were replaced by the latest crop of 2008 paints, 72 in total. Well be reporting on these paints early next year, after theyve been in the water long enough to evaluate. Most of the paints on the 2008 panels are the same as those from the 2007 and 2006 panels, but the field has been expanded with some new paints and some experimental paints that don’t yet have a launch date.

This years group includes a new entry from Microphase and two new paints from Epaint. There are also two variants of Pettit Vivid called Vivid Free and Vivid Caribe. From Interlux, theres the new copper-free Pacifica and California Bottomkote. And from Sea Hawk, the Caribbean-marketed ablative, Islands 77. Awlgrip Allstar joined the fray, too.

Three Interlux paints have been removed from the 2008 lineup: Super KL, Epoxycop Ablative, and Super Ablative. The company is phasing these out this year.

Micron 66 from Interlux has become a perennial favorite in our testing. It again is our Best Choice after one year, based on two Excellent ratings in Florida and two Good ratings in Connecticut. Micron 66 is a self-polishing bottom paint that provides a controlled release of copper antifouling over a long period of time. Our tests-both static panel tests and field tests (see pages 18-19)-are proof this paint works as well as or better than anything on the market today. Itll cost you though: It sells for a very pricey $220 a gallon.

Our two top-rated bright-color paints, Pettit Vivid and Blue Water Kolor, are no strangers to the winners circle either. This year, a slim edge goes to Pettit Vivid with its slightly higher ratings. It is available in four bright colors, a bright white, and black; combining colors can yield another 18 palette choices. Using zinc omadine in conjunction with a relatively low copper content (25 percent), Vivid rated Good in our tests.

Hydrocoat performed nearly as well, earning mostly Good ratings. It is a multi-season ablative with a 40-percent copper load. It uses no anti-slime agent and is priced at a fairly reasonable $105 a gallon. Blue, green, red, and black are the available colors.

Among paints for aluminum hulls, Flexdel Aquagard Alumi-Koat edged out Pettit Alumacoat, a perennial favorite in this category. It comes in black, white, red, or blue.

Other Recommended hard paints are Interlux VC Offshore (for racing); Pettit Unepoxy Plus; and Pettit Trinidad SR, which has a good record in previous longterm tests. At $80 a gallon, Pettit Unepoxy Standard earned a Budget Buy rating.

Interluxs Super Ablative and Epoxycop Ablative also fared well, but both are due to be phased out. You may see clearance prices on these two paints as the stock dwindles, but be prepared for any prep work that may be required when it comes time to paint again.