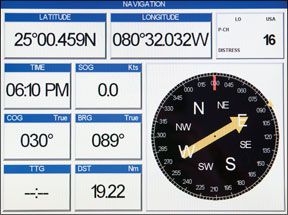 Do-it-all electronics are propagating at a rapid pace, and Standard Horizon is certainly a top player in the market. Its new CPV550-packed with a VHF and all the bonus capabilities one would expect from a top-of-the-line radio, a full-function chartplotter, and the ability to hook up to an optional black-box sounder and an AIS receiver-is big and bad. It features a massive 12-inch color screen and can do just about anything.

Standard Horizon designed the unit to minimize chances of a single failure point killing the whole system. The VHF and plotter are separately fused, but you will need the optional RAM remote mic to get the VHF to keep working if the plotter has issues. The sounder, if installed, has a separate power connection. Proximity to antenna cables joining the VHF masthead antenna would seem to make the CPV550 more vulnerable to a lightning strike. However, no plotter is immune to lightning damage.

Whether the advantages of price and space savings outweigh the potential risks of commingling these two devices depends on the users circumstances. In either case, a backup handheld GPS and handheld VHF are worthwhile, as these can be stored inside a Faraday cage (in some cases, an oven will work) and survive a lightning strike intact.

The across-the-board capabilities of the CPV550 required an extensive series of tests for this evaluation. We accomplished the majority of the VHF radio bench tests weve used in the past to assess the transmitter output. FCC regulations limit power output of a marine VHF transmitter to 25 watts, and require a low-power setting, typically 1 watt, for harbor use. The transmitter signal output measurements were taken directly off the radio antenna port.

At room temperature (75 F), power output from the CPV550 was satisfactory and stable at both high- and low- input voltages and on high or low power settings. To test the transmitter at a cold-weather extreme, we put the unit in a freezer (at 15 F) for four hours and then ran the test again. Though its power didnt waver in this test, it drifted off frequency. Frequency accuracy is defined as the ability of the transmitter to send output signals precisely on the selected frequency.

Regulations mandate an accuracy of 10 parts per million, which equates to about 1550 Hz off frequency in the marine band. Industry groups typically call for half that error, or 5 parts per million, which is the specification on the CPV550. The CPV550 drifted off frequency far enough to go out of its specifications but not out of the regulatory limit. We measured it again after 5 minutes at room temperature and then again after 15 minutes. It was well within specs during both follow-up tests.

According to Standard Horizon spokesman Scott Iverson, the company is looking into why the CPV550 drifted off frequency during our low-temperature test. Since most boating takes place at temperatures well above 15 F, we consider the performance to be more than adequate. We didnt check it at the high temperature extreme because it was too big to fit in our heat chamber.

Another key receiver standard, normally measured in decibels, is selectivity. The amount of selectivity a radio has will establish how well it reproduces only the signals received on a selected channel. Standard Horizon gives the CPV550 a selectivity specification of 80 decibels, a high number on par with the best radios weve reviewed.

Wind and waves can make a boat a very noisy place. It is essential that a marine VHF radio reproduce incoming voice signals well and with sufficient volume. To rate the audio system, we measured the sound pressure levels at maximum volume while inputting a 1 kHz tone with our Ramsey monitor. At a distance of 1 meter, the 4.5-watt audio output of the CPV550 generated a powerful 95 decibels. Our tester also gave a subjective Good rating to the audio system while monitoring a weather channel broadcast.

A long list of features like an integrated 30-watt hailer with automatic and manual foghorn capability, sophisticated DSC capabilities that include a second receiver designed solely to receive digital signals, a large rotary knob for channel selection, and the ability to connect up to two remote microphones rank the CPV550 with the best standalone VHF radios for both features and performance. Its comparable to the Icom M602-the Practical Sailor Best Choice in our last fixed VHF test (March 2006)-which has since gone out of production. (Look for our upcoming test of new stand-alone VHFs, including Icoms new M604.))

The CPV550 features a huge 12-inch, color display screen with a resolution of 800 x 600. To evaluate the CPV550 chartplotting capabilities and its display screen, we took the unit out on a 16-foot powerboat equipped for testing. Viewability, both day and night, is the most important factor when rating a large-screen plotter. We rated the display under a variety of lighting conditions and with and without polarized sunglasses.

The CPV550 display was bright and sharp in daylight with our best view attained with the “Sunlight” color palette. The “Normal” setting also worked well. “Night Vision” mode darkens the screen to reduce glare and improve low-light viewing.

While viewing the screen in daylight with polarized glasses, testers noticed it darkened slightly even when viewed from straight on. It continues to darken a bit more at more severe angles. Without the glasses, we found the screen usable at just about any angle. Testers were able to read detailed information onscreen from about 4 feet away with normal font and symbol size.

The CPV550 carries a full alphanumeric keypad plus a half-dozen soft keys to further enhance functionality. We found the plotter easy to operate using dedicated buttons and the joystick. Each of the soft keys has a dedicated function. For instance, if you put the cursor over a waypoint, the soft keys will let you edit, move, or delete the point with a single button press. The full alphanumeric keypad was icing on the cake.

Several other features impressed us. The adjustable course predictor works well and is easy to see. Data blocks display valuable information across the top or side of the map page in a variety of configurations that are user selected. Hitting the mark key puts a waypoint at the present position; moving the cursor and pressing the route key enters a waypoint. We found routes very easy to build. Waypoint names can be up to 10 characters long and use one of 16 symbols.

Testers found the CPV550 equal to the top big-screen plotters weve tested, including Standard Horizons CP1000C, our most recent Best Choice (May 1, 2005). Like the Icom, the CP1000C has ceased production, so look for an upcoming review of fixed chartplotters.

Bottom Line: More rugged and easier to read than the smaller CPV350 (September 2007), the CPV550 earned high marks for its wide-ranging capabilities and big display. However, Practical Sailor cautions that any all-in-one approach should be well supported with backup devices.