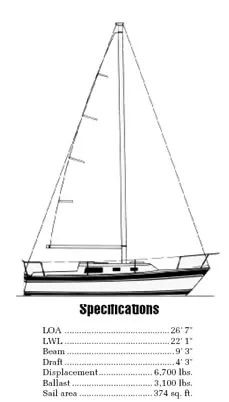 Jack Jensen formed one of the country’s most successful fiberglass boatbuilding companies in 1959—Jensen Marine—when it introduced the Lapworth 24 centerboarder. Not long after, the name was changed to Cal. Based in Costa Mesa, California, the model name stood for the state of its origin. The Cal 24 got the company going, no doubt helped by the much publicized circumnavigation of teenager Robin Lee Graham, documented in book and film by the name of Dove.

The famous ocean racer, the Cal 40, with its divided keel and rudder, came along about 1965. Our story begins in 1970, with the introduction of the Cal 29, another of the company’s many successful designs. Looking for something similar but a bit smaller, the company asked designer Bill Lapworth for a 27- footer, which at first was the Cal 27, a fin keel, spade rudder design with a convertible pop top; another incarnation of this basic hull was the T/2. But the concept of the 29 found its full expression in the Cal 2-27, which began production in 1975 and continued to 1977, after which it was again modified and called simply the Cal 27…again. Production of it ceased in 1986. In the mid-’70s Jensen Marine was bought by Bangor Punta and moved east to Fall River, Massachusetts. O’Day was part of the company business, too, run by Jim Hunt, son of yacht designer C. Raymond Hunt. By the end of the 1980s operations ceased, due to the severe downturn in boat sales, the same tailspin that caught Pearson and many others.

Design & Construction
The Cal 2-27 (and the 1980s Cal 27) is somewhat different than the first Cal 27 and T/2. Where the earlier design had a relatively flat underbody, the 2- 27 shows a somewhat beamier and fuller hull, with a displacement/length ratio of 278, compared to 218 for the initial design. The 2-27’s displacement of 6,700 lbs. was up from 5,400 Lbs., beam was 3″ greater, and the waterline 3″ less. Where the T/2 had a funny fixed cabin to provide headroom (a problem with the pop-top 27), the 2-27 gave 6′ 2″ headroom throughout. So she was conceived to appeal more to family sailing than racing. Like the 27, the 2-27 also incorporated a small skeg to provide a bearing for the rudder, a feature of many Lapworth designs of that period.

The sail area/displacement ratio of the 2-27 is 16.7, down from 18.2 for the 27 and T/2. While still sufficient for good sailing, the more conservative sail plan is again better aligned with family sailing. But the company still saw the 2-27 as a boat that would appeal to racers, at least of the club variety. An early ad says, “The Cal 2-27 was designed to race competitively under the MORC and CCA rules. She rates approximately 21.6 under MORC and 24.1 under CCA. With larger headsails and a penalty pole, she will rate half ton under the IOR rule.” Under PHRF, it rates about 200, slightly more or less depending on the fleet, slower than a C&C 27 at about 175, and Morgan 27 at about 180. Still, the design seemed to satisfy the company’s requirement for a family boat that would also perform to the satisfaction of club racers.

The rig is a masthead sloop with single spreaders and single lower shrouds. The mast is untapered, made by SuperSpar or Kenyon, the two having slightly different dimensions. It was stepped on deck, supported by a compression post resting on a transverse fiberglass molding.

The hull is solid fiberglass and ballast is internal lead, dropped into an “envelope keel.” The deck was cored with plywood sections set in a mish-mash of resin and glass, held down by sandbags until cured. Fred Cook, vice-president of Schaefer Marine, who worked for Cal during those years, jokingly said they called it “early vacuum bagging.”

The hull-to-deck joint was sealed with putty and glassed over on the inside. The interior incorporates a half pan which would include the cabin sole and hull stiffeners; above that the berths and other furniture were wood. Unusual in a production boat, the bulkheads were bonded to the hull and deck (this means a soft liner to cover the overhead, instead of a fiberglass molding). These are real pluses.

Most owners rate construction as excellent, employing the term “overbuilt.” One owner said, “The Cal 2-27 has been well-designed and constructed and rigged with good quality materials.” Cook said he knows of one 27 that cruised the South Pacific. “They’re bombproof,” he said.

There are some complaints, however, one of the more common being inadequate backing plates for stanchions and deck hardware. A number of owners said they fabricated their own to correct this weakness. Other criticisms include gelcoat crazing (which is common to most older boats), difficulty in sealing chainplates at the deck, need for ground tackle system (e.g., bow roller, chocks, anchor well, etc.), hulldeck joint leaks, gate valves on through-hulls, lightweight companionway drop boards, loose rudder post, and opening ports in head that hold water. There always are a few detractors of any design, it seems, and we did receive a response from one owner who said the boat “is not well built (leaks, poor hatches, siphoning effect through head, poor adjuststanchions).

I installed backing plates, new hatches, electronics, traveler, etc.” After which he concluded it is a good family boat, suitable for day racing “if upgraded.”

The interior is roomy, with a V-berth forward, settees amidships, and the galley aft, under the companionway and bridge deck (nice feature).

The only wrinkle is that the head is part of the forward cabin, so there are some complaints about lack of privacy. “There is an upside,” wrote one owner. “The forward cabin is truly a mini-stateroom, much less claustrophobic than other boats of similar size.” On the later model 27s, a folding door was added to separate the head from the V-berth. The same owner also mentioned that with the galley athwartship, companionway traffic crosses over it. Storage space is a bit limited, and though the counter is long and provides some good uncluttered space for working, some aspects of it are awkward, such as the ice box, which requires putting a knee on the port settee and sticking your head under the overhead to look inside.

The berths are all of good length at 6′ 4″. (In the late-model 27s, the galley was given an L-shape, taking space from the starboard settee, so that the foot of the berth was shoved into the hanging locker; it’s doubtful a tall person would be comfortable on it.) Pilot berths were offered as options, so that the boat could sleep six persons.

Performance
Owner comments about sailing performance range from criticism to jubilation. The owner of a 1976 model says the boat is probably 1,000 lbs. overweight and slow. Others said it is the “fastest moderate displacement 27-footer I know of,” and it is an “extremely fast boat rarely beaten, then only by some pure racers.” The majority of survey respondents, however, rate the boat’s speed upwind and downwind as average to above average. Most owners seem to agree that the 2-27 is quite stable, heeling to 20 degrees and settling in. Regarding balance, again responses vary widely; a few say it is skittish, needing “a high degree of sail adjustment to balance.” But most say it handles nicely until higher wind speeds are experienced, when weather helm can become a problem. One owner said, “Weather helm can be minimized by proper rigging and sail trim adjustments.” On the whole, owners seem to feel the boat behaves well, even in the blustery conditions of the San Francisco Bay area. “A good sailing boat,” seems to sum it up.

The Atomic 4 gasoline engine was installed in many boats, with a single-cylinder 12-hp Farymann diesel as an option that few chose. Some boats were fitted with outboards instead. We have also heard from owners with Volvo MB10A and 11-hp. Universal diesels. A number of owners said accessibility was less than ideal. And not many Farymann diesel owners had much good to say about it—“Electrolysis just ate it up and it was difficult to get parts.” Diesel owners also said they felt their boats were underpowered. The owner of an outboard model said, “Inboard engine is a must; do not recommend outboard.” And there were the usual complaints about control when backing.

Conclusion
Despite what may appear to be a litany of gripes from owners of the Cal 2-27, they appear, by and large, to be a happy lot. None reported major problems with the boat, rather small stuff that can be corrected. Overall integrity of the hull and deck structures seems to be above average.

As the years went by, the interior was upgraded with more teak veneers, opening ports and better equipment.

Owners feel the boat stands up well to windy conditions, stating they feel safe in the boat because she is stable, does not heel excessively, and remains under control when the usual precautions have been taken (i.e., shortening sail).

The more serious considerations for a potential buyer will be general condition, and in that regard a number of respondents said they’d never seen a really ratty Cal 2-27, adding that the owner group has a sense of pride and camaraderie. Indeed, in California there are a number of very active fleets that turn out in double figures for scheduled racing events.

For cruising, the boat seems best suited to two persons-a number of owners said so. The cockpit, which seems to be of sufficient size, again is most comfortable with just two to three persons, especially when tiller steered. But for weekend and short cruises, the boat is more than adequate.

The “Price History” chart, using data from the BUC Research Used Boat Price Guide, shows a large increase in prices in 1986; remember that during the late 1970s and into the mid-1980s, new boat prices accelerated, drawing used boat prices along, so that one could occasionally make money on an older boat. But the market collapsed in the late 1980s, accounting for the dramatic decrease in 1988 values. As we have discussed before, during this period BUC generally depreciated values until, in the early 1990s, brokers protested that because the used boat market was to a large extent cleared of mediocre boats, those that remained were actually commanding somewhat higher prices than a few years before. BUC responded by saying it had adjusted values for some boats slightly upward based on spot identification of those particular boats.

In fact, it seems to us that BUC has increased values across the board in 1993 and 1994, which is reflected in the slight upturn in prices for last year. We’re not convinced this is justified. When we checked other publications for asking prices, we found surprisingly few 2-27s and 27s listed.

Those mid-70s models we did find ranged from a low of $9,000 to $15,900. So while we think the BUC prices for these boats are pretty much on target, we do think you can find some boats for less. We doubt BUC would disagree.