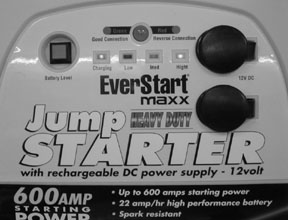 A few months ago, we were working on an evaluation of cabin heaters in the workshop of our executive editor. The workshop is set up more for work on rope, deck hardware, and marine coatings than for things electrical, and when it came to the 12-volt-powered heaters, we found that our 10-amp DC power supply wasn’t up to the task. Nor did we have a charged 12-volt battery on hand. We scratched our heads for about 15 seconds, then the executive editor said, “Wonder if this’ll work,” and hauled out of the shadows a new, in-the-box Xantrex Xpower Powerpack 300 PLUS that he had lying around, waiting for its moment. We hooked heaters to the Powerback, one by one, and the booster easily put out the required amps—about 25—for the half-hour or so that we worked on the last three heaters.

We were impressed, considering that the unit had come to us from Xantrex about six months before, and had never been brought to full charge.

More recently, aboard a charter boat, we found that the cardinal battery sin had been committed: The selector switch had been left on “Both,” and the electric bilge pump had drawn both batteries down so low that they couldn’t start the diesel. Someone ran down the dock, brought back a booster box, and moments later the engine was running and recharging the batteries.

These boosters, or power packs, have been available for years, but suddenly they seem to be in every hardware, automotive, department, and marine store and catalog. Some are simple and small enough to be slipped under a driver’s seat; many have cigarette lighter sockets for running 12-volt appliances, and some have several other features (as is true of the Xantrex here). They generally come with a cord fitted at both ends with a cigarette lighter plug, so they can be recharged from a car’s (or boat’s) battery banks when the engine is spinning the alternator. Uses aboard boats are legion—not only to jump-start an engine, but to charge cell phones and handheld electronics, and to be a portable, self-contained power source that can run a pump, a radio, or any number of other things.

What We Tested
With so many brands and models out there, we decided simply to compare the Xantrex booster with a couple of other models, both from outlets that are at least familiar to most readers, and that have good accountability in terms of customer service and returns—West Marine and Wal-Mart. We chose boosters with different cranking amp and amp-hour ratings, and with different bell-and-whistle capabilities. See the chart for specs.

The ability of a booster pack to start an engine relies on its available cold cranking amps (CCA). This is the number of amps a battery can deliver for a period of 30 seconds at a temperature of 0° F, before the battery voltage drops to 7.2 volts (1.2 volts per cell).

The amps required to start a marine engine vary with the type of engine (diesel inboard, gas inboard, gas outboard), as well as the size of the engine, the condition of the engine, the condition of the battery, and the ambient temperature. The bigger the engine and the lower the temperature, the more CCA will be required. Diesels generally require more than gas engines. Engines in good working order, in a warm climate, with nothing holding them back but a dead battery, might need only a couple of hundred amps for two seconds to get going, while an engine with other firing problems, or a big, cold diesel, would need much more. Smaller marine diesels of 1 to 3 cylinders require around 300-400 CCA, while bigger diesels might require from 600 CCA on up. That’s what these booster packs are meant for—quick jump-starts, not protracted cranking.

These booster packs use sealed, AGM (absorbed glass mat) lead acid batteries. All have automatic polarity detection, and all require a minimum voltage in the dead battery in order to activate themselves. This is an excellent safety feature—they won’t flow current until a good connection has been made, and proper polarity has been sensed. This eliminates sparking. However, the Wal-Mart EverStart comes with a manual override button that allows the user to put power to the cables without any voltage feedback from a dead battery.

How We Tested
All three booster packs were given a full charge, then left alone for a week, then used to start a car (142-hp gasoline engine) in which a dead battery had been substituted for the starting battery, and connections made with jumper cables. The weather was chilly—about 40° F. All three managed the job, and in about the order you’d expect from the boosters ratings: The one with the most CCA started the engine most easily.

Two weeks later, our friend the shellfisherman couldn’t fire up the 80-hp John Deere diesel that powers his dredge pump. It was about 12° F, with ice forming in the harbor. We dropped in with the boosters, which had been freezing in the back of the car all night—and accomplished exactly nothing. Neither of the bigger boosters could turn the recalcitrant engine fast enough to fire it off. Later in the day, when the temperature had risen to a balmy 30°, we tried the Wal-Mart booster and got the engine running after a few seconds of cranking. (Admittedly, the auxiliary engines on most sailboats would likely have less than 80 hp, and these boosters would seem adequate to start those.)

All the boosters were then completely recharged and used, in turn, to run a one-amp incandescent cabin light until the glow went out. The results of this drain test are shown in the chart on the next page, below the claimed amp-hour numbers. All three models surpassed their claims.

Xantrex Xpower PowerPack 300 PLUS
The Xantrex is the most feature-laden of the three units. For a few extra dollars you get an inverter to make AC power (250 watts continuous, 300 watts for five minutes, 500 watts surge capacity); two small fluorescent worklights, and an air compressor that will pump up to 250 PSI. The compressor comes with nozzle adaptors and a needle that fit into a clever compartment, and the compressor hose lives in a channel that fits it exactly.

It’s also the most sophisticated device electrically and electronically, and has the most informative manual, by far. And, it’s the only one with detachable cables, which makes it less cumbersome if it’s just being used as a power source or compressor.

On the downside, it has the fewest cranking amps, and is the highest-priced. This would be our pick for a smaller boat, not only because of the fewer cranking amps presumably necessary to jump a smaller engine, but because the extras would allow an owner to consolidate space by eliminating a separate inverter, a separate worklight, and a compressor.

West Marine Jumpstart 400 Mk2
This model, with a single 12-volt cigarette lighter receptacle, is an updated model, according to our local West manager, made for West Marine by Vector. An older model with two DC outlets and part number 5406434, has recently been on sale for $59.99 at many West Marine stores and on their website. Both models are named “Marine JumpStart Elite” on the website, but, mysteriously, not on the box.

This booster pack is more vertical in aspect than the other two, and will be somewhat easier to stow on some boats, even with the clamps stowed in back. The LED lighting is quite bright, and of course tough and energy-efficient. It also comes with West’s “no hassle guarantee.” The DC receptacle can carry a 20-amp load, which is higher than the other two, and that might be a consideration.

Even so, assuming that this would be used on a decent-sized boat, and used as a jump-starter—rarely, we hope—it’s hard to choose it over the Wal-Mart unit, which has more juice for less money, and allows you to put power through the cables as you wish.

Wal-Mart EverStart Maxx Heavy Duty Jump Starter
This one has the most cranking power for the lowest price. (The 300 CCA version of this at Wal-Mart costs $39.) It has two DC receptacles, but no other functions. The lack of a worklight is a negative, but the manual override is a big selling point. It allows you to power up the cables in case you need to start an engine with a completely dead battery, or to use the cables to power other things at a higher amperage than you could manage through the cigarette lighter receptacles. We were even able to check the battery with a 100-amp automotive load-tester by hitting the override button. Of course, using the override means using extra caution—that way lie big zaps.

We’d pick this Wal-Mart booster if our primary concern was having significant power available, for engine-starting or anything else. Boats set up to cruise will already have what they need of flashlights, inverters, and compressors aboard.