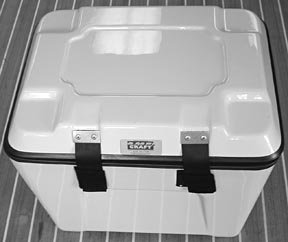 We’ve published quite a few words in recent months on refrigeration, fridge-free foods, and thermoelectric coolers. In the midst of these efforts we received, over the transom, a smooth fiberglass cooler called a Mini Main-Tainer from Paul Zway, of Action Africa in Tucson, AZ. He calls himself the Krazy African, and imports a lot of camping and adventure gear from his native continent. This cooler carries polyurethane insulation in thick walls and lid, and Mr. Zway said it would knock the socks off the typical cooler on the U.S. market. So we set up a simple experiment.

Unfortunately, the $290 price tag for this cooler will tend to reserve it for true cooler buffs and those with special purposes, like medical personnel. Paul Zway says there’s not much that can be done about the cost, given the current exchange rate between the dollar and the rand, and the fact that the greatest part of these cooler shipments from South Africa consists of the air inside them.

Mr. Zway points out that if you can lay your hands on some dry ice, most of these coolers, but especially his, will perform quite well for a coastal cruise. He suggests visiting the website: www.dryiceinfo.com, and after having done so we heartily agree. The site has a wealth of useful information about frozen carbon dioxide, what you can do with it, and how to get it. The site authors point out that dry ice sublimates into its gaseous form at the rate of “10%, or 5 to 10 pounds every 24 hours, whichever is greater.” Since it turns into a gas, tightly enclosed spaces (like the Mini Main-Tainer) need to be vented occasionally to keep the gas pressure down. Presumably a boat would have adequate ventilation to keep the O2 vs. CO2 balance healthy. The other obvious safety concern is that dry ice can cause burns. Small kids shouldn’t be given access to a cooler or ice chest where dry ice could be handled accidentally.

Meanwhile, however, dry ice can keep food cold and/or frozen, and vastly prolong the life of regular ice kept in the cooler or ice box.

Another coincidence: As we were preparing this report, a reader named Scott got in touch to let us know about his experience with a couple of new Igloo coolers he’d bought. They were advertised as being able to maintain ice for five days in 90-degree temperatures (with Ultratherm® insulation). Scott told us that his bags of ice had lasted about a day, and he had a thing or two to say to West Marine, where he’d bought the coolers, and to Igloo.

We visited Igloo’s website and found, on the Frequently Asked Questions page, the fine print: “Ice Retention Testing is performed at Igloo laboratories under controlled conditions. Please note that your ice retention results will vary. The following usage points listed below are recommended to achieve optimal product performance…”

We won’t reprint all those points here; most are obvious. But one may not be: “Chilled water from recently melted ice in the cooler should not be drained as this actually results in more effective chilling of items in your cooler than simply ice alone.”

Ice cubes, if you must have them, should be transferred into leakproof Ziploc-type bags. Block ice is much longer-lasting, and can be made at home in plastic milk jugs… or in the handy foil bag described in the sidebar below.