Standard power on cruising sailboats is 12 volts, and since the beginning of time, the standard low-voltage outlet, as a consequence, was a 12V cigarette lighter plug. It is a terrible design, dating back to when the most popular 12V accessory was a stupid 12V popup cigarette lighter. There were a few efforts in the past, like the Jones Plug known to electronics buffs. Motor cycles are gravitating towards the DIN standard Powerlet (see page 16), but no single standard has really caught on. We’re stuck in the 1950s with an antiquated plug designed for a completely different purpose.

With the advent of computer-everything, USB plugs are becoming common in sailboat cabins, and little by little, USB-powered fans and other gadgets are popping up. Many are computer-oriented, relating to data transfer and hubs. Some are, frankly, weird. Scented leaves. Roaming robots. Helicopters. Desktop single can cooler/ warmers. Mini-keyboard vacuums. Green houses. Heinz tried to introduce a USB microwave, but given the low watts available, it seems to be vaporware, and it’s probably just as well. I’m too scruffy to care about the USB electric razor. Aquarium with filter, clock, and a pencil holder? Yep there is such a thing—powered by USB.

USB outlets vary in power capacity. On your laptop, USB 1 and 2 are limited to 2.5 watts, USB 3 is limited to 4.5 watts, but in battery-charging mode (or power output to lights or a fan) they can deliver 7.5 watts.

USB lights are endless. With the low draw of LEDs, both strip lights and table lamps are common. Red LED strip lights may be the simplest way to add red nighttime work lights to the cabin. LEDs produce about 45 lumens per watt. You want about 10-25 lumens for a typical work area, so about 0.25-0.5 watts will give usable light. LED strings can often be trimmed to length to dial in the brightness. See PS October 2020 “Are Chart Lights Steering Us Wrong?” for details on night-adapted vision requirements. Laptop keyboard lights can also work, if the USB outlet is behind the chart table.

Most USB fans are too small for any real purpose, but a few make the grade and are nearly as efficient as marine fans in terms of cubic feet per minute per watt (CFM/watt) and per dollar, and much quieter. They won’t ventilate the whole cabin, but they provide considerable spot cooling with no noise. We like them for moving air past a heater and sleeping in moderate weather.

We’ve had 12-volt marine fans and computer cabinet fans for many years. The USB models were new to us for this report, but we ran each of them at least 200 hours without a hiccup. We measured decibels and wind at 3 feet, and CFM in a test rig. Now they are installed for long term evaluation.

For a more review of 12-volt marine cabin fans see PS October 2010, “Endurance Test of 12-volt Fans Wraps Up.” You can find previous tests by using the search box at www.practicalsailor.com.

For just $14, our expectations were low. And wrong. At only 37dB, it is the quietest fan we have tested by 16 dB. It moves only half the air volume of typical marine cabin fans, but the jet is so well focused it will move your hair 6 feet away if it’s aimed right. We still like our Caframo Ultimate for moving large amounts of air though the boat to fight summer heat, but were using the F42 in the winter to circulate heat because it is quieter and because the breeze is well focused, distributing heat without creating a draft.

Bottom line: We’re not going to “recommended” it because we have only used it a few hundred hours and because it is too small for hot weather. But if all you have is a USB, it’s a good bet.

This is one of many computer cabinet fan options. We don’t think of these in terms of cooling, although they provide enough to ventilate bilges, cabinets, areas near freezer coils etc.

USB plugs aren’t just for recharging. Although the power output is severely limited, they can be a handy for running LED lights and small fans. And at least one of those fans shows some promise. 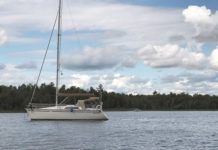 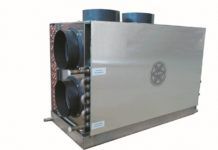 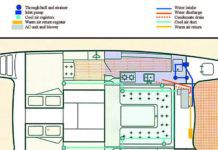