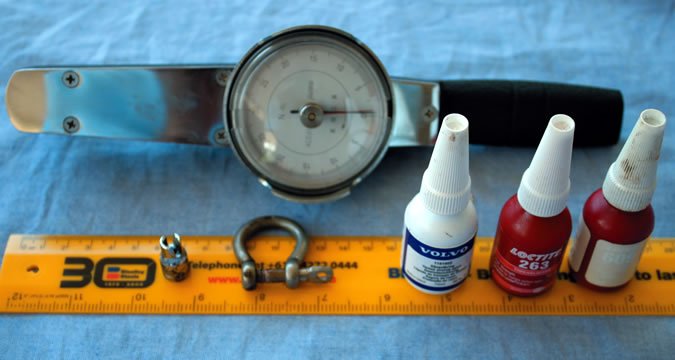 Once upon a time in Tasmania, a skipper faced a daunting task: install a three-bladed, folding propeller without hauling out the boat. The underwater job would require an adhesive to secure some of the bolts, but which adhesives that were already on board would work best under water? To find out, PS contributor Jonathan Neeves decided to run a little adhesives test of the three products he had on hand-all commonly found at chandlers worldwide under the same or a similar brand.

This small test field included two Loctite-brand adhesives (263 and 609) and one Volvo-brand adhesive (1161053). The three are all marketed as anaerobic formulas, meaning they will set in the absence of air.

Loctite, owned by Henkel Corp., is the major supplier of adhesives for bonding threads. The Loctite range offers two basic types of bonding for threads: those that can be released relatively easily, say with a spanner or even by hand, and those that form a permanent bond, requiring force to release. The latter can be released using a blowtorch.

Loctite 263 is one of those products that requires heat for removal. It is rated for temperatures up to 180 degrees.

Conversely, the Loctite 609 is better suited for parts that need subsequent dismantling. It is described as a rapid-curing adhesive that begins setting in as little as 10 minutes; it fully cures in 24 hours. According to Loctite, it adds up to 3,000 psi holding power.

After doing some research, testers surmised that the Volvo adhesive we tested is very likely a re-branded Loctite product (Loctite 242). While information on the Volvo-brand adhesive was hard to come by, Loctite 242 is recommended when regular servicing is required, and disassembly can be achieved with normal hand tools.

Neeves used a series of identical quarter-inch, stainless bow shackles and tested the adhesives on the clevis pin threads in both wet and dry conditions. In the underwater test, he applied the adhesive to the thread of the clevis pin when it was dry but screwed the clevis pin home while holding it in seawater. In all cases, he simply finger-tightened the pins, meaning he used no effort and any bond was due to the adhesive. The hardware was left in a bucket of seawater overnight, and then the bonds strength was tested.

We tested each product using two amounts of adhesive: One test set was bonded with one drop of product, and another test set was bonded with two drops of adhesive. One drop was enough to thinly coat all of the threads; two drops were sufficient to coat and fill the threads, without dripping. When the two-drop threads were screwed home, the excess was squeezed out of the shackle eye. As no shackle is identical, Neeves used three shackles for each test. We also burnt off old adhesive with a blowtorch and cleaned them with a wire brush.

To measure the strength of the bonds, Neeves used a torque wrench.

Neeves found that one drop in dry testing was insufficient and that there was not enough adhesive thickness. With just one drop, the Volvo adhesives bond was minimal and easy to break by hand. There wasnt even enough of a bond to get any meaningful torque measurements. The one-drop tests torque measurements for the two Loctite products varied with an average of 3.66 Nm for the 263 and 4.1 Nm for the 609.

With two drops of adhesive, the Volvo product developed some strength but not enough to inspire confidence in a critical item, like a propeller or anchor shackle pin. The Volvo achieved strengths of 1.36 Nm, both dry and wet, after 24 hours. The Loctite adhesives performed better in the two-drop tests: Both achieved a strength of 5.2 Nm in the dry test, after 24 hours; after 72 hours in the wet test, the 263 achieved a strength of 5.8 Nm and the 609 measured 3.7 Nm.

For full security and a lasting bond (in an area where you can use a blowtorch for removal), we recommend Loctite 263. Neeves decided to employ it on the folding prop in question and also on his anchor shackle pins. He confirmed that when applied liberally to an anchor shackle pin, the 263s bond will not release by hand; he has had to resort to a blowtorch to remove the pin. He also has used Loctite 609, but prefers the extra security of the 263. For securing shackle pins on blocks for running rigging, where removal might be frequent, we Recommend the Volvo (Loctite 242).

For more on adhesives, check out our last full test of caulks and sealants in the August 2010 issue.