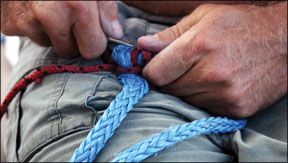 Sailors use a variety of hitches to hold highly loaded line, chain, or wire. For instance, to remove a riding turn from a winch, another line must be secured to the sheet in front of the winch to take the load of the sail, allowing the rest of the sheet to go slack so it can be freed. The hitch used must grip the line and not slip under load when the end of the sheet is released and the hitch comes under tension. On a typical 40-foot sailboat, the hitch must hold about 2,000 pounds of load without slipping.

These “gripping hitches” can also be used to secure a snubber to anchor chain, to hold mooring lines while the bitter end is moved between a cleat and a capstan, to tension flag halyards, to secure an inner forestay to the mast when not in use and to attach a bridle line to a drogue rode when towing a drogue or using a parachute anchor.

The simplest and most common of the gripping hitches is the rolling hitch. Used for millennia aboard sailing vessels, the rolling hitch was developed for use on chain and large-diameter line with a great deal of friction, like hemp or three-strand. On more modern line, which tends to be much more slippery, the rolling hitch often slips under load. It may also fail to hold on wire or stainless-steel tubing.

Necessity being the mother of invention, a variety of other hitches have been developed that deal with the rolling hitchs short-comings. These have the advantage of increased holding power, but they are more complicated to learn and remember when they are needed. Practical Sailor decided to test five of these hitches to determine which offers the most holding power with the least complexity.

Rolling hitch. This is the simplest and most common of the gripping hitches. Every Boy Scout uses this hitch to secure tent guy lines to tent pegs. It can be easily adjusted by hand but then holds in place under load. Two turns of the line are made in the direction of the tension, and then the bitter end doubles back to a hitch taken on the side of the turns away from the strain. The turns and the hitch are all made in the same direction. (See photo above.)

Sailors hitch.This hitch uses extra turns in the direction of strain as well as a jamming turn to begin and end the hitch to increase the holding power over the rolling-hitch variations.

Icicle hitch. Developed by John Smith to meet the challenge of holding under a lengthwise pull toward the thin end of a tapered spar, the icicle hitch finishes by taking both ends of the line through a jamming hitch to increase holding power. It is similar to the Kleimheist knot, but is tied with a bight in the end rather than the short loop used for climbing.

Gripper hitch. Recently developed by Warren Messer of Red Barn Boats after he had difficulty getting an icicle hitch to grip on a piece of stainless-steel tubing, this complicated hitch uses turns in the direction of the strain and in the opposite direction to lock the line in place.

A few tricks will help all of these hitches to grip better: Use older, thinner line. This is one of the few applications where old line is preferable to new. New line will usually have a soft, slippery finish while older line will have a harder, rougher feel that increases friction. The gripper line should be smaller diameter than the line it is trying to grip.

For illustrations, photos, and videos of how to tie some of these knots, check out www.animatedknots.com or www.bethandevans.com (under the Articles section).

We evaluated each of the hitches to determine how complicated they were to learn and use, how well they held, and how easily they could be untied.

Ease of use. On most liveaboard cruising boats, one of these hitches would perhaps be used on a weekly basis, not daily as would be the case with a bowline or a clove hitch. When the hitch is needed, it is often a bit of an emergency situation, as when the tension must be taken off a sheet to release a riding turn. The user cannot take the time to run below to check a diagram.

So, its important that whichever hitch a sailor decides to routinely rely on, it is easy to remember and relatively easy to tie. Our testers spent a half-day learning each of the hitches and getting comfortable doing them without instruction. A week later, we timed the testers while they tied each of the hitches to see how long it took and whether they could remember the hitch without referring to the instructions. While they were able to remember all of the hitches, it took them far longer to reproduce the more complicated ones.

Ease of release. After tensioning each hitch on each of the materials, we removed the tension and untied the hitch to see how easily it could be released after having been loaded.

The Practical Sailor Value Guide summarizes the performance of each of the hitches.

This classic gripping hitch slipped in all but one of our test situations. After it had been tensioned up, it was always a bit difficult to untie, though it never required a marlinspike.

While it was the most easily tied and most easily remembered, it cannot be relied on for use with anything but chain and large diameter, high-friction line at relatively low loads, in our opinion.

Bottom line: If you want to be sure your line wont slip, don’t rely on the rolling hitch.

The riggers and camel modifications to the rolling hitch increased its holding power without greatly increasing its complexity. But it still did not hold on slippery, single-braid Spectra line or on the greased stainless tube with the larger diameter line.

Like the rolling hitch, it took some time to undo after it had been loaded up. It would be a good choice for a quick and easy hitch for moderate loads.

Bottom line: A definite improvement over the rolling hitch, but still not reliable in all situations.

The sailors hitch took twice as long for our testers to tie as the two rolling hitches, and it was the hardest to undo when used with line. After being tensioned on the single-braid Spectra, it took a marlinspike and 10 minutes of hard work to free it. The hitch also slipped when tied with half-inch Dacron line to the greased stainless-steel stanchion.

Bottom line: This hitch does not perform any better than the modified rolling hitch, but it is harder to remember and jams when used with certain types of line.

The icicle hitch also took twice as long as the rolling hitch to tie, but it performed better than all but the gripper hitch, holding in all test situations.

Though the icicle hitch would separate a bit as it was tensioned, the top of the hitch never moved even with maximum load. This was the easiest hitch to undo after it had been tensioned.

Bottom line: The extra holding power and the ease of release more than make up for the slight increase in complexity of this hitch.

While this hitch performed every bit as well as the icicle hitch, and might have outperformed it, had we made the testing even more difficult, its complexity can’t be ignored. It took our testers one-10th the time to tie the various rolling hitches and a quarter the time to tie the sailors or icicle hitches. After a week, it was already difficult to remember, and it would be all but impossible after a month. Even with a lot of practice, this hitch will take longer to tie than any of the others. It also required a spike to undue after being highly tensioned.

Bottom line: The gripper hitch may have the highest holding power, but in an emergency, most people will prefer a hitch they can remember easily and tie quickly.

The modifications to the rolling hitch greatly increased its holding power, but even those failed to grip the 10-millimeter uncovered Spectra line. These failures explain the need for alternative hitches.

The gripper hitch is cumbersome to tie and difficult to remember. It can be tightened and adjusted when tied to wire, tube, or a loaded line, where all its components could be twisted and tugged, but is much more difficult to make neat and tight when tied to loose line (as when creating a bridle for a drogue or sea anchor).

This hitch appeared to have greater reserves of gripping power than any of the other hitches, but our testing suggests that these extra reserves would not be needed in normal sailing applications. So, while superior in gripping power to everything except the icicle hitch in the tests we devised, it would not be our first choice when on deck at 2 a.m. and being pelted by salt spray. However, it is a hitch worth keeping in mind for a situation where nothing else will hold.

As far as choosing one of these hitches to learn and use in real-world situations, we pick the icicle hitch. It held in every test we devised, which covered most situations that might come up on a boat. It is actually easier to untie than the rolling hitch when used with line, and it never jammed during testing.

This tested as the best all-around knot for holding a tensioned line.