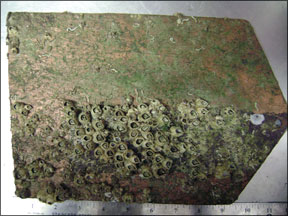 A Pitch for Ultimate Sole

In the December 2007 Practical Sailor Advisor, you requested feedback on Ultimate Sole, a product for coating cabin soles. Two years ago, I added a -inch teak-holly veneer plywood covering to my sole and used Ultimate Sole as the finish. I first put on a sealer and then two coats of Ultimate Sole. It went on very easily and performed better than I expected. It is a hard, glossy finish that truly does offer nonskid properties. You look at the finish and think you will slide all over the place, but you don’t! It is a wonderful product, and I wouldn't use anything else.

Regarding your request for information about Ultimate Sole. I used it on my Cabo Rico and have been quite pleased with the results. I recommend using their “waterless cleaner” between coats. An acetone rubdown leaves a gooey mess. I

would also recommend the Jen polybrush (also recommended by Rebecca Wittman, author of “Brightwork”) over the junk sold at most home-improvement stores.

We received two other thumbs-up letters for Ultimate Sole and nary a complaint. Weve ordered some for one of our test boats, a Union 36 cutter, and our nonskid test platform (last featured in our in June and July 2007 reports on sailing shoes).

Cetol for the Sole

Our experience with the use of Cetol on the sole of our 1981 Sabre 28 MkII suggests that your “do not recommend” assessment is not a prime example of Practical Sailors usually excellent advice.

Eight years ago, we decided to take our boats grimy oiled teak-and-holly interior down to bare wood and resurface it with Cetol without using the Cetol Gloss final surface coating, to ensure safe footing for wet feet. We applied three coats per the directions. Each year since then, we have cleaned the sole and applied a new single coat of Cetol.

Applied and maintained this way, the Cetol has worn very well indeed, as a recent survey attested. However, we should point out that no one enters the cabin without “boat shoes” or bare feet, and that we try to make sure a minimum of grime comes aboard. Still, the Cetol has lasted at least as well as wed hoped, looks good, and provides reasonably secure footing. Based on our own experience, wed give Cetol a “Recommended” rating for this application.

Regarding your search for cabin-sole finishes: After some research, I finally decided to use a tung-oil product from Waterlox (www.waterlox.com). The product was recommended by a representative from MinWax, who advised me that he didn't think the MinWax sanding sealer and spar urethane were appropriate for the job (probably because of the oily nature of the teak). The Waterlox Original Sealer and Finish went on very easily. It flowed out well and dried to a hard, smooth, almost transparent surface. It doesn’t seem to be slippery under wet feet. It has held up well. Id like to see you include this in your next review of cabin-sole finishes.

In the November 2008 Mailport, there is a letter asking about Coppercoat as a bottom coating. When I was in New Zealand in 2004, I put a similar coating on my 45-foot trimaran. I bought the copper powder and mixed it myself with West System epoxy. For $100 worth of copper and 3 gallons of epoxy, I coated all three hulls. After four years in the tropics, it is still in excellent shape. Its not the best

though. I have to scrape off the slime and grass every two or three weeks. Still, I don’t get any hard growth unless I let it go for months. Since I am a life-long diver and ex-commercial diver, the scraping isn’t a problem for me. Its also good exercise. I use a stainless-steel drywall knife that doesn’t hurt the coating since it is very hard.

Regarding your interest in copper-epoxy coatings: I have a 45-foot DeVries steel ketch moored in a bay on the big island of Hawaii. I hung a steel plate about a foot square off the stern about three months ago. The plate was barrier coated with a non-hazmat, no-blush epoxy. I took the same epoxy and added copper powder to make a putty-like consistency, and added a thinner so I could paint with it. I coated the plate except for a strip in the middle about 3 inches wide.

The result was barnacle growth as you would expect on the center strip and very little growth on the copper area (see photos at left). Plant life still grew on the copper-coated area, but it was very easy to scrub off. The few barnacles on the copper came off quite easily without leaving a base behind.

I pulled the plate out yesterday, and the results seemed so dramatic, I didn't see any reason to leave it in the water anymore.

With these results, I am very tempted to paint my bottom with the copper powder in the epoxy on my next service (in the fall). I don’t mind scrubbing the bottom, if this system would last several years.

Practical Sailor has not tested these coatings in a long while, both of the above reports on copper-epoxy antifouling seem consistent with our past findings with similar products. Regular scrubbing of a copper-epoxy blend might afford long protection, but when used on a slow-moving sailboat, the coatings potency lags behind the best bottom paints. Some of our Florida paint panels emerge after two years with only thin coatings of slime, and on test boats, Practical Sailor contributors have been able to get three years of protection from some hard paints in tropical seas, albeit with increased cleaning intervals during the last 12 to 18 months. Anyone who dabbles in such homebrews should be sure to research the warnings concerning the handling and storage of these materials.

Could you please tell me where Acco Marine Chain is actually

manufactured. It seems Acco and their distributors resist saying where it is actually made. There are rumors it is manufactured in South America thus “American.”

www.peerlesschain.com) moved Accos production equipment to Winona, Minn., where the manufacturing is done today. Heres an excerpt from a Winona news report from 2007: “Since July, when the acquisition became final, Peerless leaders have worked at the complicated task of moving between 8 and 9 million pounds of equipment, inventorym and machinery to the Winona location, totaling in at a whopping 210 truckloads.” The link to the full article: www.winonapost.com/stock/functions/VDG_Pub/detail.php?choice=18686.

I recently read the article on batteries, and the success the author has had with Trojan T-105s. I also have the same four-battery setup of these batteries and am

satisfied with their performance.

However, I have a storage problem. The boat is in storage for nine months of the year, in the tropics. It is not feasible to have the batteries checked, topped up, and charged, on an on-going basis. After nine months, the batteries are virtually dry from evaporation. Filling them, with distilled water, and charging them requires careful attention, as they overheat easily and often.

Should I just switch to sealed batteries? Can you recommend what I should do?

We spoke with Craig Quentin, a technical expert at Trojan Batteries, and he offered the following thoughts: “First, you have to determine your primary mode of water loss. Is the water being charged off as a result of charging (i.e. a solar panel), or is it evaporating due to the high-temp climate.” He offered the following options, depending on the situation: You could try low-maintenance battery caps (available online at most battery suppliers). Watermiser caps are good for mild to moderate evaporation losses, but they will not prevent losses caused by gassing caused by overcharging. Hydrocaps, on the other hand, can recombine the gasses lost during solar or float charging and drip it back into the cells as pure water. They have little to no effect on evaporation.

You could instead opt for a sealed battery. According to Quentin, a sealed gel or AGM battery will cost about twice as much as a wet cell and give you about three years of life in a hot climate. In either case, youll need a new charger or have to adjust the charge voltage on your charger.

Do you have any information on the longevity of light-colored or white lines versus dark-colored lines?

spoke with Dave Richards, the technical director at the Cordage Institute (www.ropecord.com), an industry group involved in standards making on this topic. According to Richards, there have been some studies on how color might accelerate degradation caused by ultraviolet radiation or heat, but the difference is not significant enough among marine-grade lines to influence ones choice of colors. According to Richards, both nylon (Dacron) and polyester lines used on a boat have fairly good resistance to ultraviolet light, and sun exposure alone is usually not the primary cause of failure. According to Richards, external abrasion and interfiber friction are the chief causes of degradation or failure, and that is not affected by color. Polypropelene lines, on the other hand, degrade quite rapidly in the sun, and for this reason are not a good choice for marine applications (except where a floating rope may be required). Color may affect the rate of degradation in polypropelene, but we are unaware of any data that supports one color over another. Our December 2007 article, “Nylon Rope Endurance Test” (www.practical-sailor.com/marine/used-nylon-rope-endurance-test.html) delves deeply into this topic.

In response to your request for recommended do-it-yourself boatyards: I just relaunched my 1983 Aloha 32 sailboat from Bob Waltons boatyard (in Delta Marina, Rio Vista, Calif.) after a bottom job. About two years ago, I used the yard to refit seacocks and to replace the prop, shaft, and shaft seal. On both occassions, I did most of the work, borrowing tools, getting advice, and learning as I went. Their prices were low, their willingness to help me was astounding, and the owner and I have become friends. This boatyard is within a days cruise of San Francisco (50 miles from Bay Bridge) and is a little-known bargain in a high-priced region.

is still collecting data for this article. If you have a favorite DIY yard, please nominate them by sending an e-mail to practical
sailor@belvoirpubs.com. So far, West Coast readers are leading the charge with the most recommended yards. The Northeast seems to be the epicenter for dying or disappearing DIY yards, with the Souths supply dwindling as well. Weve recieved few reports from the Great Lakes Region and Gulf States.
Also with this article...