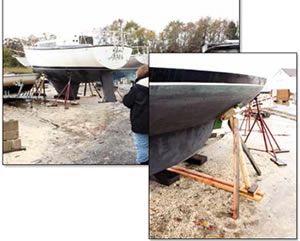 We got a half-taste of your Florida hurricanes here in New Jersey. I had my boat hauled out a few days before super-storm Sandy arrived. The yard blocked her with just four jack stands and a bow jack stand. I asked for four more for the hurricane, and they said no, so I built my own midship stands for $16! I wanted to share the how-to since they worked so well.

We were not only expecting 80-mph winds, but we were told it could last many days, so I needed a system that would not work loose under constant strain for 36 or more hours.

From Home Depot, I bought a landscaping log, a discounted 2x10x8, and a dozen lag screws. Cutting the 2×10 into 10×9 squares, I made bases and hull pads. The hull pads have a second 2×10 square pad lagged together with a square hole cut in it to locate and trap the bevel-cut top of the landscaping log.

The 2x10x9 bases were lag-screwed to two 12-foot 2x4s, running parallel under the keel to support the bottom 2x10x9 bases. Both ends were screwed into the logs with long lag screws, then the top was captured by the square cut and the bottom backed-up with a sawed 2×4. The parallel 2x4s under the keel insured the bases didnt disappear into the sand with the flooding. They also kept the bases from separating athwartships, away from the boat. I used a handybilly (4:1 block-and-tackle) under the keel to chain the stands together.

I needed fore and aft support of the stands, so I nailed braces. And the system worked!

Some boats in the yard fell over; some floated off their blocking; and just 1,500 yards away, the Viking powerboat yard got hammered. But Alma stood proud, and even fended off an attacking fishing garvy!

Thanks for sharing, Gene. Anyone else with lessons learned or tips gleaned while preparing for or weathering super-storm Sandy? If so, email us your stories and photos at

In all the tests that Practical Sailor has done on bottom paints, I havent seen any testing/comments about Ceram-Kote products (www.ceram-kote.com). Their latest formulation contains Econea biocide and should do well as an antifouling as well as being a very hard barrier coating. Im using the pre-Econea version and have had it power brushed twice a month since December 2008, and it is a durable finish. With the inclusion of Econea in the new formula, the cleaning cycle should be reduced appreciably.

Thanks for the info. Well be sure to include it in our next round of bottom paint tests.

I had purchased a pair of lines, and since I secured the chafe gear, there have been no further problems. Thanks for the informative article.

I call your attention to a material called Skarktek. Its a plastic sheeting embossed with a certain texture (inspired by shark scales) that inhibits bacterial and other growth. Its being investigated by the Navy for possible marine application. Heard of it?

We have heard rumors that some major marine-coatings manufacturers are looking into its application for fighting hull antifouling, but were not aware of any products that use the shark-skin technology yet. (Bound by non-disclosure agreements, the paint makers would not offer any information on their research.) We believe the Navy-funded research you referenced is being carried out by Anthony Brennan and the Brennan Research Group at the University of Florida (brennan.mse.ufl.edu). Interesting stuff, indeed.

I updated my fixed-mount VHF from the reliable Icom M412 series radio to the new Standard Horizon Matrix GX2150 (PS, July 2012) because of its AIS feature. The problem I had was with the remote VHF microphone, a RAM3 with an AIS display. I could never clearly hear incoming broadcasts, even at its highest volume. My handheld Standard Horizon HX851 offered better sound than the remote mic, and I found myself using it rather than the remote mic in order to receive clear incoming broadcast.

I called Standard Horizon about it, and they had me send the mic in for repair. It came back with a new speaker but no improvement.

Out of desperation, I installed 4.5-inch, waterproof West Marine-brand external speakers, which turned out to be the best thing ever! I can now hear broadcasts from all over the cockpit of my 52-foot vessel.

The moral here is that with all the new bells and whistles, don’t forget about the basics, like being able to hear clearly from the speaker.

In your online tips for replacing nonskid, Lay New Nonskid to Restore Worn Decks, PS recommended a product called PosiGrip. The phone number listed doesn’t work, and I cannot find any information about the company. I am very interested in this product. Can you help?

As far as we can tell, that company and that product are no longer around. Check out our most recent test of nonskid paints, paint additives, and adhesive mats in the January 2012 issue. Any of the Recommended products would be good choices if youre replacing your nonskid, but the one most similar to the old PosiGrip would be the Tiflex Treadmaster mat (www.tiflex.co.uk), PSs Best Choice pick.

I would suggest that the keel article (PS, November 2012) misses out on a couple of matters that are very important to cruising sailors.

As may be gathered from the attached photo (above), I believe that a 3/4-full keel is the ideal for a cruising sailor for the following reasons:

It allows the boat to have a real bilge, not the inches deep approximation that is the standard with fin keels. That means any water entering the boat has a place to go instead of running up the inside of the hull (if the boat is heeled) and soaking every storage area.

As stated in the article, it will survive the inevitable grounding on coral (me three times) and on mud and sand (lost count) without real damage either going on or getting off. In one grounding in sand, I raised full sails to heel the boat, therefore reducing my draft, and got off easily. That maneuver may have stressed a fin keel to damage point. If you are aground on a falling tide, the fuller keels provide a stable support for the boat, allowing it to stay upright for a lot longer-hopefully until the tide starts to come in again.

It is said that the full keel and 3/4-full keel make tacking more difficult, and that may be true to an extent. However, I make the point that cruising sailors never tack more than once a day, and then only after several hours of careful consideration, and they have no compunction about starting the engine to drive the bow around. There is no law that says you then have to fly the I started my engine flag.

The fuller keels provide protection for the rudder from debris, nets, and other material that seems to abound in the so-called open ocean.

I do have to say that the fin keels provide one advantage that leaves me green with envy: They can be accurately steered in reverse.

One other consideration with any keel design is balance. Boats like the Mason 54 with so much lateral plane aft can be stiff to steer, require more rudder angle to go windward, and have a tendency to broach early. The low position of the rudder can also make it vulnerable in a grounding. That said, the boat is a good example of a rugged cruising boat.

Where Credit is Due: