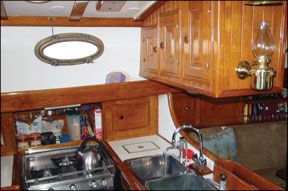 Another sailboat owners’ group that should be added to your list of boat owners’ websites (“Website Roundup,” January 2010) is the Friendship Sloop Society: www.fss.org. This July will be our 50th annual reunion. We anticipate a good turnout of boats, some 100-plus years old and still racing!

Practical Sailor received several reader letters sharing subscribers’ favorite marine resource and boat-owners’ websites. They included the International Catalina 30 Association site, www.catalina30.com, and the manufacturer’s site, www.catalinayachts.com, which lists active Catalina owners groups. Another good one to add to your online “Favorites” is The Salty Southeast Cruisers’ Net, www.cruisersnet.net. Recommended by reader Jim Starr (Snap Dragon, Tartan 3400), the Net is run by cruising guide author Claiborne Young and covers all things related to the Atlantic Intracoastal Waterway. Thanks for all the tips; keep ’em coming. We’ll be adding them to our links page on www.practical-sailor.com.

Every reader probably has his/her favorite websites, but let me offer mine. It is often desirable to know local magnetic variation. This is constantly changing, as is the annual rate of change published on the compass rose on your chart. For Canadian sailors, current values may be found at www.geomag.nrcan.gc.ca/apps/mdcal-eng.php. U.S. sailors will probably be better served at www.ngdc.noaa.gov/geomagmodels/struts/calcDeclination, although the differences are small.

Note that using your GPS to get the magnetic bearing of a waypoint may not be good enough for some applications. The GPS calculates in true and converts to magnetic if you ask it to.

Last summer, I tested a half-dozen GPS units. The GPS errors in converting between true and magnetic ranged from zero to more than 3 degrees, which is too much error for some applications. You can check your unit by having it tell you the true bearing to any waypoint, and also the magnetic bearing. The difference is local magnetic variation according to your GPS. Compare this with the correct variation from one of the above sites.

Regarding your article on electric propulsion in the January 2010 issue: We completed the conversion of Cabernet, our 1973 Coronado 32 MkII, from gas power to electric drive. On our first extended test cruise of the electric conversion, we cruised Lake Chelan at 4.5 knots (50 amps) for about 10 miles. We had a light headwind, but not enough to sail. We had 50 percent of our battery capacity left at Chelan, exactly what we had hoped for in terms of speed and range.

We charged up for about 4.5 hours, then loaded eight guests onto the boat, and cruised around during the local WinterFest Fire and Ice festivities with Christmas lights around the mast. We docked and went to dinner, leaving the Christmas lights lit. Then, we motored back 1 mile to another dock to charge for the night.

It was great to not have to “warm up” the engine, smell gas fumes or exhaust, and the electric motor was very quiet, so we could talk easily on our boat and to other boats.

The next day, my wife, Anne, and I motored back to our dock (10 miles). It was low overcast and dead calm, and it started to rain the last half-hour. We cranked up the power to 75 amps and 5 knots to get to the dock faster and still had an hour of cruising time left in the batteries at the dock. We didn’t have to use the range-
extending generator at all.

Support from Electric Yacht has been excellent. See conversion details online at www.brookssolar.com/Cabernet%20Electric%20conv.html.

In the January issue, you recommended the transporters from www.uship.com to a reader. This past fall, I purchased a boat in New York and had it transported to Mississippi with that service. My experience was very positive. I had lots of bids and used one company that was very reasonable. His service was outstanding. It was easier and cheaper then if I drove to New York and picked up the boat myself. I would use them again.

I noticed in the May 2009 Mailport that a subscriber was looking for Enkes parts. I want to let readers know that information on parts for Enkes winches, service kits, exploded views, conversion kits for standard to self-tailing, and of course new winches, can found on www.enkesmarine.com and from the great people at Holland Marine Products (www.hollandmarine.com).

I am tempted to save a few dollars by substituting household products for those marketed as marine grade. Sometimes, this can be risky—like using an automotive grade alternator on a marine engine—but as your article on exterior wood finishes (December 2009) showed, at other times, you can get excellent results by doing this.

During a trip to Home Depot, I noticed a large variety of construction adhesives rated for exterior use, at a fraction of the cost of the “West Marine” variety. Maybe in a future article, you could do a comparison of adhesives like you did with the varnishes.

In terms of adhesives, you have to be sure that you have the right type of product for the job. Our last long-term test of adhesives—which was launched in the April 1, 2005 issue and updated in the August 2006 issue—addressed which type of adhesive is best suited for particular tasks, and it took a look at products from popular “marine” brands as well as hardware store favorites.

GM makes good caulks for polycarbonate ports. And some “hardware” silicone caulks are also very good, but applications are limited. For below-the-waterline applications, we recommend sticking with the proven marine brands like 3M and Sikaflex.

In our 2005 tests, two caulks not marketed specifically to the marine industry that performed well were Ace Hardware’s Clear Sealant and Elmer’s Squeeze N Caulk (silicone/acrylic-latex). The other top picks were Sika Corp.’s 291 LOT (polyurethane) and West Marine’s Silicone. Of these, the Elmer’s was the least expensive.

This test is ongoing and due for a revisit. Look for five-year results in an upcoming issue and a fresh, new test in the future.

Reading your comparison of mechanical vs. digital fridge/freezer controls in the April 2009 issue, I was a bit amazed at the price quoted for the digital control, the $300 Scad Sensistat (www.scadtech.com). After using these controllers on our Glacier Bay holding-plate system for years, with the last 3½ years as a liveaboard, I had to replace a controller.

The Corel controller I purchased looks exactly like what you pictured, but I only paid about $120 for ours from R-Parts (www.rparts.com). You might have tested a more advanced model because I don’t think we have free-energy capability. Then again, there are lots of things that ours will do that I don’t have the desire nor need to figure out.

I agree that a digital control allows great freedom in finding the most efficient set point and differential. Using the Glacier Bay vacuum panels for insulation, we are currently getting about 30-36 hours holdover on the fridge, using about 18 minutes of compressor runtime. The freezer is running about 16 to 18 hours of holdover time using about 15 minutes of compressor runtime with an ambient cabin temp of 60 to 70 degrees.

The April review was meant more as a look at digital vs. conventional controls, and less about specific products. But as you guessed, the Scad Sensistat we tested is more advanced than the Corel thermostat you purchased from R-Parts. According to Scad Tech, the Sensistat incorporates a Corel controller but also has the added benefit of a programmable circuit board, which allows charging monitoring and hysteresis (differential) reduction. Charging systems (alternator, gensets, wind, solar) can produce energy at a higher rate than batteries can absorb. The Sensistat monitors whether this “excess” energy is available and closes the hysteresis gap, reducing the need to use battery power for refrigeration.

These bonus capabilities add to the price, and in our opinion, are worth the expense. However, if these are functions you neither need nor will use, then shelling out the extra cash would not be worth it.

I concur with the author of the February 2010 Mailport letter regarding foggy chartplotters from Raymarine (www.raymarine.com). Excluding the fogging issue, my Raymarine package (radar, chartplotter, autopilot, wind, depth, etc.) has performed well. (It came with my 2002 Lagoon 380 catamaran.) But I’ve had it fixed twice for fogging, and it wasn’t inexpensive. If I remember correctly, it was over $500 each time. When I called to complain that it continues to fog, they wanted to charge me again.

I did not fully appreciate Practical Sailor until moving back to the East Coast after 22 years of retirement in Coronado, Calif., where I had my boat in the water all year long.

Now, reading Practical Sailor when the temperature is 35-40 degrees outside and cloudy, I can smell the slight odor of diesel, feel the movement of New Horizons VI, hear the talk of fenders against the timber, and almost hear the voices of friends walking the dock.

Thanks for the review of the Union 36 in the February 2010 issue. I’ve always thought that Union built solid, nicely finished boats.

Some of your readers may be unaware that they also built a 32-foot Ted Brewer-designed, cutter-rigged, double-ender. My wife and I have owned our 1985 model for the past 23 years. It is a nice sailing, comfortable cruiser that, at least to our eyes, is beautiful as well. The downside is that, like the 36, it has a great deal of teak requiring frequent attention.

I urge you to consider just how many small sailboats are out there. I sail on an inland lake in SE Indiana. Our sailboat only marina contains about 100 boats, of which a 27-footer would be one of the largest of the fleet. Has anyone ever calculated how many inland small boat sailors there are compared to the big ocean sailors? Just think of us small-boat owners when you are selecting products for review.

Unlike the more niche publications, Practical Sailor has a very diverse readership: from armchair skippers to freshwater-lake racers to bluewater voyagers, and everything in between. It is our goal to produce each issue with a little something for everyone—some products reviews that are applicable on small boats and others for big boats—and we hope we’re successful. So, take heart, we haven’t forgotten about the little guys. In fact, the majority of the PS test-boat fleet is shorter than 27 feet. Stay tuned for gear and boat tests for small boats in upcoming issues.

After reading “PS Sea Boot Camp” in the October 2009 issue, I noted that none of the testing involved boot width. Would you please address boot width, and potentially provide a list of suppliers that have selectable widths?

Of the boots we tested for that issue, the only manufacturers who offer varying widths are Dubarry (www.dubarry.com) and Aigle (www.aigleboots.com). The PS Best Choice boot, the Dubarry Ultima comes in regular and “ExtraFit” for those with wider calves and wider feet. The Aigle GoreTex boots have adjustable calves, but only come in regular foot width. The other test boots are only available in “regular/medium” width.