The first thing we can tell you about the 12-volt Odyssey battery is that it came in the mail—UPS to be exact—which is an unusual mode of delivery for a lead acid battery. For one thing it’s light—13.3 lbs.—for another, it’s a “starved electrolyte” battery, in which a small amount of sulfuric acid is injected under pressure and then sealed. It is, the manufacturer Hawker Engery Products told us, a “dry” battery and “nonspillable.”

This is not a gel cell; it differs from conventional lead acid batteries in a number of ways, one of them being that the plates are pure, unalloyed (and very thin) sheets of lead. Without the presence of other metals (commonly antimony, to provide grid strength), there’s little chemical reaction going on internally so it loses very little charge in storage. Hawker says the Odyssey has a shelf life of about two years.

Hawker makes a number of startling claims about this small (6.7″ x 3.9″ x 6.9″) package. It will, the company says, deliver up to 700 pulse current amps for 3-5 seconds, the normal time required to start an engine, 245 cold cranking amps, and has a reserve capacity of 30 minutes. It is also a “true deep-discharge” battery, says Hawker exec Bruce Essig, delivering 400 cycles and providing a service life of 3-5 years. And because it operates with a starved recombinant electrolyte system, you can slap on a charger with little worry because any gases produced (hydrogen, oxygen) are converted back into water. There is no current limit for those using a (preferred, in this case) constant voltage charger; the voltage limit is 14.7-15.0 volts for those using a constant current charger.

Hawker, which makes batteries for electric cars, and also manufactures the starved electrolyte battery for autos under the Black Panther name, has changed some of the industry standards for “100% discharge” or “reserve” time, for example. But Essig said the battery technology requires a different means of measurement. The Odyssey, he said, doesn’t operate like conventional lead acids, and can be discharged 100% (to 10.5 volts, essentially) without damage, compared to just 30-35% for regular batteries. It can use up to 60% of its reserve rating, the company says, and still start an engine, where conventionals will start to stutter after discharging 30-35%. “Our voltage discharge is very stable through 50% of discharge,” he said.

The Odyssey was developed as a replacement (competitor) to the ubiquitous Japanese-made Yuasa 12-volt for personal watercraft, the impetus being the introduction of the larger (110-120-hp.) three-seaters. At $150 per, the Odyssey costs significantly more, but will, Essig said, deliver far more starting amps than the Yuasa and last years longer. (Some PWC owners have told us their Yuasas must be replaced yearly.)

We tested the Odyssey first on a Honda CRX 1500 (about-90 hp.) and turned the engine over twice—no problem. We then went to Kiwi Marine Services in Portsmouth, Rhode Island, where we put a 225-amp drain on the battery and watched as the fully-charged unit dropped to 10.25 volts, then rose to 11 after 30 seconds; on a second test, the voltage dropped from full to 11, and the battery was still pushing 700 amps 20 seconds later when the Snap-On battery/alternator test gauge lit up like a toaster and began smoking. Without recharging, we then turned over a four-cylinder VW diesel twice, with just a hint of hesitation each time. At this point, the charge was down to 12.3 volts, no load.

We don’t know whether the Odyssey will crank a Detroit Diesel. Nor do we know whether it will produce a full 400 cycles. We do know that, in terms of cranking amperage, it produced above its specs. And, at 13 lbs., we think it would make a great backup starter battery, especially for smaller boats, or to power running lights and such. (Odyssey, Hawker Energy Products, 617 N. Ridgeview Dr., Warrensburg, MO 64093; 816/429-7506.)

The HotBlade
Good amateur rope work, which takes a bit of time and patience, isn’t seen much anymore. You occasionally run across a nice tapered splice, but a crown knot is rare and nobody can find a use for a six-strand double Matthew Walker.

However, almost everyone who owns a boat sooner or later must cut a line. The easiest way to cut today’s tough synthetic line is to lay the sharp blade on the line, temporarily taped at the point where the cut will be, and simple press or rock slightly. Creating a bight and sawing with the knife dulls the entire length of the blade.

Once the line is cut, how many know how to apply a good-looking whip, which range from what Hervey Garrett Smith called a common whipping, which can be done barehanded, to a palm and needle, snaked or British Admiralty whipping that will outlast the rope?

Many boat owners resort to what the professional rigger, Brian Toss, scorns as a “butane backsplice,” usually done poorly with a cigarette lighter that won’t make enough heat to do a good job. Such rope-end treatments rarely last a season, eventually coming unraveled to create what is called, perfectly descriptively, a “mare’s tail.”

The HotBlade runs on butane, but the flame is directed from the inside onto a well-shaped, stainless steel nose. In about 30 seconds the nose heats up well enough to melt fairly quickly and neatly through line up to 3/8″. Don’t press; it does no good. With line larger than 3/8″, the blade can be moved around the circumference of the rope to make a clean cut. Even if the cut turns messy, the HotBlade can be used to “dress” the cut.

It’s easy to touch off. Finger a switch and you can hear the hiss. Push a button and the gas is ignited. You’re not supposed to leave it running for more than two minutes. Presumably the heat build-up (butane burns at several thousand degrees) might work back into the plastic case. Also, and this may be trouble, the burning gas does not turn off by itself, like a cigarette lighter; it must be switched off.

The literature says there’s enough butane to do 10 to 15 lines. After that, you slip out the butane container, which looks like a cigarette lighter, and fill it in the customary fashion.

Now there’s a second edition. This huge (1,232 pages) book is what the title says it is—an absolute compendium of concise, definitive information for cruising sailors. It’s loaded with black and white photographs, nearly a thousand of them—some descriptive, others illustrative.

The Dashews, man and wife and two daughters (Elyse, now 27, and Sarah, 24), all of whom were involved in the writing and production of this book, are an interesting family. They’re primarily big-boat folks. Their first cruising boat was Intermezzo, a Tripp-designed Columbia 50. Then came the 62′ cutter, Intermezzo II, followed by the widely known Sundeer, a 67′ aluminum ketch, and finally the 78′ water-ballasted Beowulf, which has full-battened sails for her ketch rig.

Because he designs, has built and sells boats, it was perhaps logical for Dashew to convert his voluminous research into a reference book.

For thoroughness, then, the Offshore Cruising Encyclopedia is unparalleled. For instance, in the On-Deck Comfort section, under just one subheading called Dodgers, there are referenced pages for Size, Windows, The Back Porch, Window Design, Pram Hoods, Fabric, Hardware, Construction Details and Maintenance. 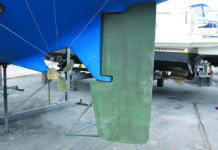 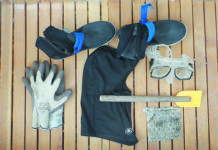 Bottom Scrub Tips to Live By 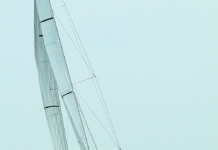 Steady at the Helm