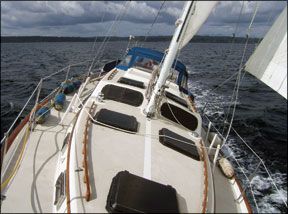 I would prefer to read boat reviews about affordable used boats. I could be wrong, but I expect many of your readers are like myself and are value-conscious sailors. There’s no way I would buy a new boat and take the depreciation hit that comes with it, even if I could afford the price tag.

I’m not currently in the market for buying a boat, but I always read used-boat reviews. Like many, I am a closet boat shopper, pretty much all the time.

The reason I subscribe is so that I can enjoy a reasonable-sized boat (28-35 feet) at an affordable cost. (Currently, I cruise a Catalina 27 and race a Mirage 24.) I’m always interested in boat reviews and specs, particularly ones that are in my price range (under $45,000). I’m particularly interested as I’m looking to upgrade in a year or so.

Thanks to all who e-mailed recently with product-test requests and boat review suggestions. Given the current buyers’ market for used boats, we will be stepping up coverage in this area. E-mail practicalsailor@belvoirpubs.com with your suggestions.

Why, if I can buy a can of shaving cream for $6 with a bottom that does not leave rust rings, can I not buy a can of air for $12-$14 with the same feature? This peccadillo has been rattling around in my brain for years, ever since my first can of compressed air started leaving rust stains.

Good point. Interestingly, you’ll often find that in some shaving cream brands—take Barbasol, for example—the aluminum women’s cans are more rust-resistant than men’s steel versions. (Ostensibly because women use them more in the shower.) Unfortunately, the women also get less shaving cream in their can and pay more for it. Until compressed air makers switch to aluminum cans, you can do what we do: rim the bottom edge with duct tape. We’ve used it on everything from aerosol air fresheners in the head to WD-40 stowed in a cockpit locker. Works every time.

In your evaluations of Raymarine chartplotters (June 2009 and October 2009), I wonder if you had any feedback similar to the experience I have had with the Raymarine 435 A-Series chartplotter.

I first installed a new Ray 435 in 2005. I returned it several times because of fogging inside the screen as a result of moisture. Each time, it was returned to me as “fixed” for reinstallation. In spring 2009, Sailcraft Service in Oriental, N.C., a Raymarine dealer, swapped my old one for a new one. On Oct. 6, 2009, I replaced the one I received in the spring because of the moisture issue. On Oct. 31, 2009, that new one showed signs of fogging on the inside of the screen.

I’m on my fourth Ray 435 plotter, the second one in a year, and the moisture problem has never been resolved.

Readers have reported this problem (and PS has seen it in some test products) in several different brands of marine electronics. The fogging tends to happens on cool, humid days, and in our recent tests, went away after a few minutes, once the unit warmed up.

We contacted Raymarine about your issues. Jim Hand, Raymarine senior marketing manager, explained that although Raychart 435s are waterproof, a handful of customers have reported small amounts of condensation inside the display between the LCD and the glass. “We would need to actually get one of the units in our service center to understand why moisture is in the display,” Hand said. “For customers who experience this, we recommend they return the unit to our service department. Our service department will perform a modification to the front fascia of the unit to prevent the condensation from occurring again.”

I would like to share my experience with two of the two-part varnish systems: Smith’s Five-year Clear (www.smithandcompany.com) and Signature Finishes’ Honey Teak (www.signaturefinish.com).

I was drawn to the products by their manufacturers’ promises of longevity, years without re-coating. They lived up to their claims of durability and gloss, but then came the issue of removal and/or repair.

With the Smith, the coating lasted for five years, as advertised. Then it failed at the edges and some areas lifted off the wood. The Smith finish is very hard, so forget sanding it off. Paint remover pastes did not work either. Smith and Co. recommended using MEK and then covering the solvent-treated areas with aluminum foil. That may work in the lab but not on a boat in the California sun.

Eventually, I resorted to using a heat gun. But you have to apply high heat because the coating softens only at a very high temperature—just about when the teak starts to turn dark. You have to be very careful not to burn the teak or melt the adjacent fiberglass. Excellent coating but a pain to remove.

Next came Honey Teak, which also showed good staying power. Failure was evident when some blisters developed. After sanding the areas for about an hour, I began itching all over my body, had watery eyes and incessant sneezing even though I had been wearing a mask. I immediately changed clothes and took a shower. The itching stopped. Two days later, I tried again. Within five minutes, the symptoms returned.

I called the maker, and they explained that my reaction was unusually strong. I eventually hired a professional painter to remove the Honey Teak with Jabsco paint remover.

Prospective users of these varnishes should keep in mind the difficult removal/repair when the coatings fail.

I am now back to using Pratt & Lambert, a favorite in our area, re-coating annually. I am still using Smith Penetrating Epoxy to prep before applying varnish. It really helps to reduce peeling of the varnish at the edges.

As we’ve mentioned in past articles on two-part exterior wood coatings (December 2007), their biggest downside is that removal is a serious chore. (We’ve suffered our fair share of hand cramps from holding a heat gun and scraper for hours on end!) The trick to maintaining a super-hard, two-part varnish finish is to stay on top of it. Any time a blister appears or the coating dulls, repair the spot immediately. These band-aid measures will delay the need to break out the heat gun, but not indefinitely.

A side note: Smith & Co.’s Five-year Clear has been discontinued temporarily. The maker has not yet set a date to resume manufacturing it.

Over the last two years, I’ve asked you questions about buying a 27- to 28-foot used sailboat. You promptly sent me your advice. Last month, we purchased a Precision 23. It fit our family needs very well. Thank you for your help.

Congratulations! Your “new” boat happens to be built in Palmetto, Fla., just up the road from our office in Sarasota. If you want to mingle with other Precision owners, a rendezvous is being tentatively planned for next year. Find more information is www.sailboatrendezvous.com/.

Your October 2009 issue notes that Blue Water antifouling also sells under the name MarPro. Can I assume that the products are the same? It would appear that the MarPro is more heavily discounted. I have used the Blue Water Coppershield SCX 45 but found that by the end of the summer, there was a heavy coat of sea fur growing on the bottom. There wasn’t much in the way of barnacles, but I lost at least 1½ knots by the end of the season.

According to maker Blue Water Marine Paint (http://www.bluewatermarinepaint.com/), the Blue Water and MarPro antifouling paint lines are effectively the same, with the MarPro brand generally sold through boatyards and the Blue Water more of a retail brand. We have not analyzed the formulas ourselves.

My question is about refrigeration. In my RV, I have a propane refrigerator/freezer. (It also works on 12- or 120-volt electricity.) It works great while using hardly any propane at all. Why have I never seen a marine version of this concept?

I understand that the unit must be level to operate on propane, but as I am at anchor or at a dock much of the time I use my boat, that shouldn’t be a major issue. This would free up the major electrical demands that most marine refrigeration entails.

We’ve seen a few propane refrigeration systems on boats, mostly multihulls, but they are rare—likely for the issues you mention, primarily the importance of a level playing field.

Unlike an RV, a boat is a huge propane sink with no drain, increasing the risk of explosion. It’s one thing to have a propane stove with no pilot light, that you’re attending when it is ignited, but a fridge that is on all the time would require multiple safety shutoffs.

Efficiency might also be an issue. Anyone considering propane refrigeration for a galley should first consult the American Boat and Yacht Council’s (www.abycinc.org) technical reports for its guidelines for propane systems.

I understand you are going to do an article on navigating by phone using the iPhone. I thought you may be interested in my recent experience with one app for that phone.

Last fall, we had a holiday Parade of Boats on Lake Lanier, Ga. The clear night with almost full moon did not eventuate, and with all the lights on the boats, ours included, it was difficult to find the markers—particularly since none on the lake are illuminated. I had just downloaded Navionics for the iPhone (Southern Lakes database) and decided to use that as our navigation aid to get back to the dock, some 3-4 miles. Running on the AT&T 3G network, it tracked us clearly, was accurate to within feet, and did not miss any obstructions, shores, or docks. It was easy to use and extremely fast when changing zoom (more like instant) and loading. (www.navionics.com)

I also had iNavX (www.inavx.net) but was unhappy with it due to its very slow speed and refresh times.

Glad to hear there is finally some water in Lake Lanier again! Navionics’ app is among those that we’re taking a look at for our upcoming evaluation of navigation applications for iPhones. PDA and Windows Mobile users will be interested in the Sail Clever Race app (www.sailclever.com), which we recently test drove. An iPhone version of that application is on the horizon as well. In other Navionics news, the DeLorme Earthmate handheld GPS receiver, which we reviewed in the June 2009 issue, now supports Navionics lake and marine charts.