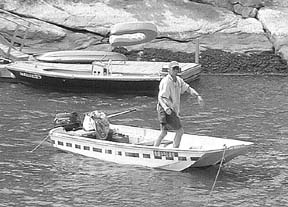 Which topside gloss enamel should you apply to make your aging beauty again glisten in dawn’s early light?

Here are the answers, in absolutely the shortest and simplest form possible:

1. If you want your hull white and you prefer an easy-to-use one-part paint, buy Interlux’s Toplac.

2. If you want a white hull and are willing to do the work needed with a longer-lasting, two-part urethane, use Interlux’s Interthane.

3. If you want a blue hull and prefer the easier one-part urethane, the choice is Epifanes’ Mono-Urethane.

4. If you want a blue hull with a two-part paint, Epifanes’ Poly-Urethane is preferred.

5. If you want to do your hull red with a one-part paint, don’t. Use Epifanes’ two-part Poly-Urethane.

6. If you want to do the boat (or maybe a scruffy dinghy) as cheaply as possible, and in yellow, no less, try the Rust-Oleum. We don’t know if there are better yellows in the “marine” paints, because this was the only yellow we tried, but it looks pretty darn spiffy in one coat after two years. The Rust-Oleum white is only fair, and the brown has turned black.

Now, if you wish to continue reading, here’s a concise review of the extensive work that led to the above conclusions. (For a complete review of this project, consult the first report on this effort in the Feb. 15, 2002 edition; the second was in 2003’s Feb. 15 edition.)

The chart at the end of the story contains a paint drum full of detail on the performance of the 39 kinds of gloss enamel paints that Practical Sailor tested over a two-year period.

Included in the test were high-quality, one-part brushable marine paints of the kind that a boatowner would be offered in a chandlery; four two-part paints that can be applied with a roller and tipped off with a brush (you need a helper or two); and several common paints obtainable in any hardware store.

Because it is so often said that colors other than white fad badly, red, white and blue paints were used. Because of limited availability in certain paints, several other colors sneaked in.

PS had exactly the boat needed to test topside paint. It was the PS editor’s 35-year-old, 13′ Boston Whaler skiff. Now 37 years old, she was once a shiny beauty whose owner spoke sharply to anyone with sand on shoes, hands, or britches. That was back in the days of Bud and Rick and their dolphin, Flipper. Readers who remember those escapades will know the vintage of this boat. Relegated years ago to workboat status, she has been very harshly treated, seeing more than her share of rusty chain, mushroom anchors, and granite.

The skiff’s hull, which had been painted perhaps six years earlier with Pettit Easypoxy (in “platinum”) was scrubbed with strong soap and Clorox, rinsed repeatedly, dried, sanded with 80-grit paper on an orbital sanding machine; washed and rinsed again, and moved inside, to dry for three days.

Three-inch strips under the gunwhales, both port and starboard, were scribed off and divided into 78 rectangles, 3″ x 3.25″ each, 39 on each side of the boat (to even out any unbalanced exposure to sun, sea and knocking about).

A mile or two of masking tape and many brushes later, the paints were on board, down both sides, in what we called “The Bracelet.” The rest of the hull was painted, too, but with a single color, and the Whaler looked chipper again…in about the same time frame during which the worker bees gave up the niggling thought that the editor had devised a very transparent ruse to get his dinghy painted.

During the application, judgments were made about the handling characteristic, coverage, and gloss of the paints. The charted results were included in a kick-off report in that Feb. 15, 2002. There were considerable differences, but in that report was this general statement: “Except for paints that covered so poorly that a second coat would be required to get a result in which you could take some pride, all of these paints look very nice. No one would be unhappy with their appearance.”

It’s important to note that this was a one-coat test, as frequently used by paint companies. Additional coats simply extend the testing period. (Multiple coats would provide longer-lasting coverage, but the gloss would not be retained much longer.)

When the skiff was hauled after a first summer of hard usage, the bracelet again was closely examined. The findings were recorded, tabulated, and entered on the chart.

Some winners seemed to be emerging, but this was after but one year’s exposure. The cogent observation in that report may have been, “Early judgments must be tempered against time. PS found this out with varnishes and teak treatments. A few can be marvelous debutantes, but later, as they age, have trouble filling this dance cards.”

In addition, the ratings for several paints (like the Awlgrip) improved, not because the gloss or coverage improved, but because each sample was evaluated relative to the others.

Back to work this past summer went the skiff. When it was hauled recently, it was decided that this will be the final evaluation. Two summers for a single coat of paint surely are enough. That called for especially close eyeballing and comparisons, port and starboard, of every sample.

For gloss and coverage, a scale of Excellent (4), Good (3), Fair (2) and Poor (1) were used to evaluate both the port and starboard samples. The four numbers for each sample were simply added to develop the final overall rating, and to put final words to the tallies, we designated 6 and under “Poor,” 7-9 “Fair,” 10-12 “Good,” and 13 and over “Excellent.”

It’s logical to conjecture that a one-coat test initially favors paints that “go on thicker,” and disadvantages others that rely on multiple coats to hide print-through from the subsurface. This idea is borne out by the fact that several paints, like the two-part Awlgrip went on thin and exhibited comparatively less gloss initially, but stayed virtually immutable for over two years, while others deteriorated a bit.

The good news is that there arequite a few paints that earned ratings of Good and Excellent. And that’s with only one coat. Think what two coats would do.

The chart tells all. However, in the prior two reports there were scattered bits of information and advice likely to be of value or interest to a prudent painter, the one who’d like to enjoy a satisfied feeling when the morning sun glints off that water and onto that hand-done hull.

The Bracelet will live on and probably get peeked at from time-to-time. 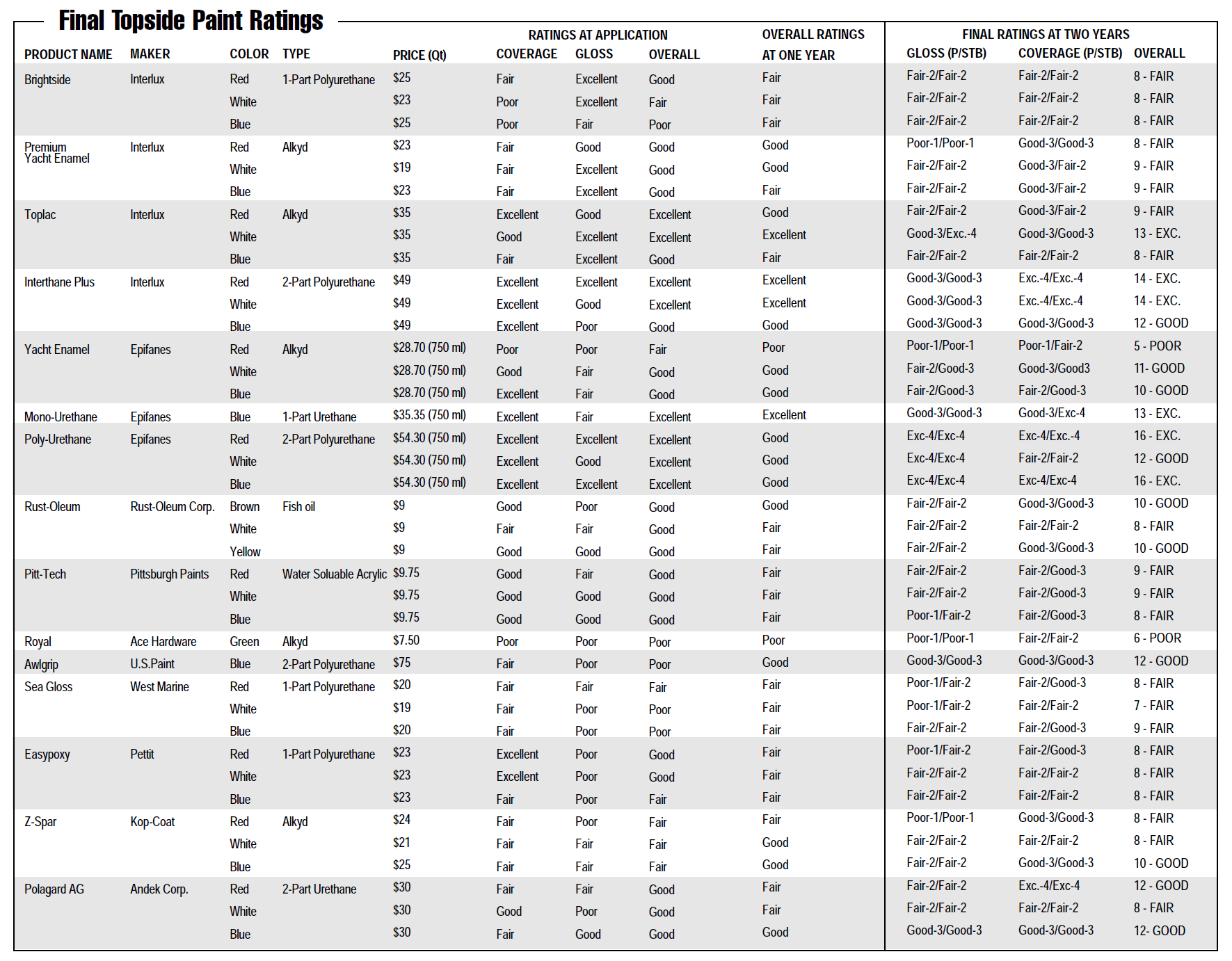