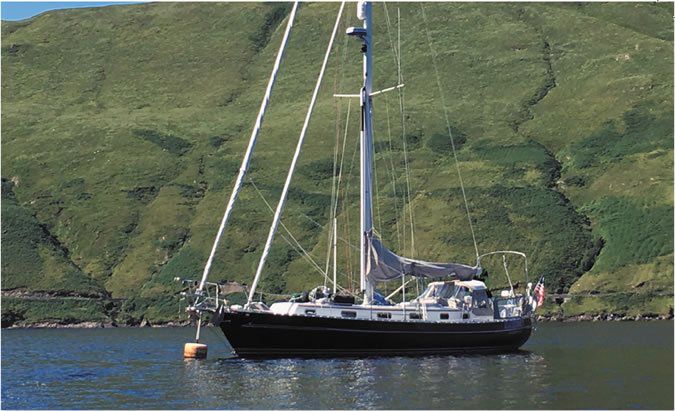 With regard to your August 2016 Rhumb Lines editorial, No Drama Anchoring Approach, and the Tandem Anchoring article in the same issue, a couple of comments:

I call using two anchors deployed in a V off the bow the catch boat anchoring method. Any upwind boat that drags becomes far more likely to be funneled into your bow, and the resulting entanglement is far more difficult to sort out. When this occurs, the chances for boat damage and/or crew injury also increase dramatically.

I believe that attempts at tandem anchoring (whether Vd, in series, Bahamian, or otherwise), and the articles and schemes generated, reflect, in large measure, attempts to overcome the limitations of ones ground tackle equipment. An example: I believe the evidence is now compelling that the CQR (used by the vessel in the PS article) is poor equipment relative to modern designs. Its limitations (and the CQR is far from being the only older anchor design to have limitations) will lead vessels to attempt tandem anchoring solutions to mitigate equipment limitations. I would push for better equipment and better practices over any attempt at tandem anchoring and would like to emphasize that anchoring with some older style anchors is equivalent to docking with partially chafed lines; its likely to work but youll be taking an unnecessary chance.

I say this primarily as a safety issue, but also as tandem anchoring frequently distorts an anchorage with boats swinging different arcs. It is also a lot more work. As for safety, ones bower should always be able to be handled safely in adverse conditions, and most boats have figured this out effectively. Handling two anchors, I have observed and experienced, is fraught with possibilities for injuries and problems. This is hugely exacerbated if one needs to do the handling at night in wind and seas. Its far better to have only one bow anchor to deal with, if there is a need haul up ground tackle and move.

One result of the continued widespread use of poor equipment is articles mitigating the limitations of this equipment. I would suggest that one should design their ground tackle so that tandem anchoring is almost never necessary. (Tandem anchoring can be more accurately thought of as more of a mooring than as a boat at anchor.) I believe that this is possible for any cruising boat and that any cruising boat (again for safety reasons) should be able to up anchor and move with a minimum of fuss (and a maximum of crew safety) in adverse conditions. This becomes problematic in most tandem scenarios.

We agree. As we stressed in the article, a good single anchor is always preferable to any tandem arrangement. If you find yourself always reaching for a second anchor, then your primary anchor isn’t doing its job, or your technique needs refinement.

In response to your October 2016 evaluation of anchor shackles: Harkens shackles are not intended for securing to any part of an anchor rode or to an anchor. We are adamant that stainless-steel shackles are not to be used for this purpose and ask that you do not include the Harken name in anchor-shackle articles.

We agree 100 percent that common, stainless-steel shackles designed for deck hardware have no business in an anchor rode setup. However, a quick online search for harken anchor shackles turns up retail links to the Harken shackles, one of which describes the Harken bow shackles as shackles for main halyards and all blocks, deck hardware, even anchors-anytime a more specialized shackle is required. We recommend that manufacturers and retailers do a better job of informing consumers that certain shackles are not suitable for use in ground tackle.

Without such a prominent caution-particularly with regards to the bow shackles, because the stainless bow shackles appear identical to shackles that other companies advertise for use in anchoring-some consumers might reasonably assume these are fine for anchors. It likely would not be hard to find some boaters already using Harken bow shackles for this purpose.

In response to your blog post, Conquering (or Coexisting with) Waterline Stains published on July 6, 2016: Bar Keepers Friend (about $3 for a two-year supply) makes quick work of stainless steel and fiberglass stains, waterline stains, etc. It is mildly abrasive, contains oxalic acid, and is in powder form. It seems to work better than most remedies weve tried.

Bar Keepers Friend (www.barkeepersfriend.com) is a favorite cruiser go-to for many tasks. As you noted, its bleach-free, but it does contain a small amount of oxalic acid (about 5 to 10 percent). Its pH level is in the same slightly acidic range as lemon juice and vinegar. When using it on stainless, be sure to rinse the surfaces well with fresh water, otherwise the oxalic acid will leave a haze. Also, be sure to keep it away from fabrics, like a bimini, as it will bleach it out.

When I read the September 2016 article about the Calypso Wind Reader, I remembered an incident a few years ago and wondered whether other sailors have had a similar problem.

I had recently replaced my wind instrument with a TackTick wireless wind instrument. The TackTicks masthead sensor has a solar panel for power and transmits data to the pedestal-mounted display; I don’t know the transmission frequency. The unit operated as advertised until one day when I traveled down the Hudson River, around Manhattan, and up the East River, on my way to Long Island Sound. Shortly after passing the Williamsburg Bridge, the display acted as if there were no signal. However, once past the Hell Gate bridge, the display returned to normal and continued working properly as I sailed about Long Island Sound.

On the return trip, the apparent loss of signal again occurred between the Hell Gate and Williamsburg bridges. I later spoke to a TackTick representative (in Great Britain), who said he knew of no other reports of a similar problem. The following year, I again made the trip up and down the East River, and signal loss occurred again. I have not noticed it anywhere else.

A friend conjectured that perhaps the United Nations is jamming the frequency. The theory seems far-fetched, but the U.N. building is in the middle of the dead area.

We have not had any other readers report signal loss issues with wireless instruments in this area, but your story is intriguing, so we thought wed share it with the readership. If anyone else has had wireless instrument signal loss-along the East River, or elsewhere-please let us know at practicalsailor@belvoir.com

Your July 2014 issue had a discussion of cockpit lights (Cockpit Lighting Options, Chandlery, July 2014). In my search for a cockpit light, I purchased a rechargeable lamp from Ivation. The lamp is rechargeable from a cellphone plug, has a variable intensity, and a handle for hanging in the cockpit. You might want to check this out.

One item that I have not seen compared in your magazine is medical evacuation services for boaters. There are many out there, and they are confusing to compare, so I wondered whether Practical Sailor would do a comparison evaluation. Many of us cruisers are concerned about availability to medical treatment. Some providers worth looking into: Geos through In Reach, Dan for Boaters, Med Jet Assist, and Emergency Assistance Plus.

PS has touched on this topic before, and you can find the articles in our online archives. In the February 2014 issue, the article Comparing Medivac Services evaluated the services offered by Global Rescue, International SOS, and Remote Medical International, and it examined which type of sailors would benefit from contracting an air-ambulance service. Beaming Down Satcom Surgeons, in the April 2014 issue, took a look at telemedicine and remote diagnostic services. These articles offer a good starting point for researching medical and evacuation services for cruisers, but well look into updating our research as well.

In the August 2016 issue, you reviewed the intriguing Helio shower. I have been using the Duckworks RLF-S pump-up shower (www.duckworksbbs.com) for years, and it works well. I use it for bathing, spot cleaning, and washing the trailer when fresh water is not available. It is black, so water can be warmed up by the sun. They don’t sell a complete unit but do sell the parts to assemble your own. I have no connection with the company.