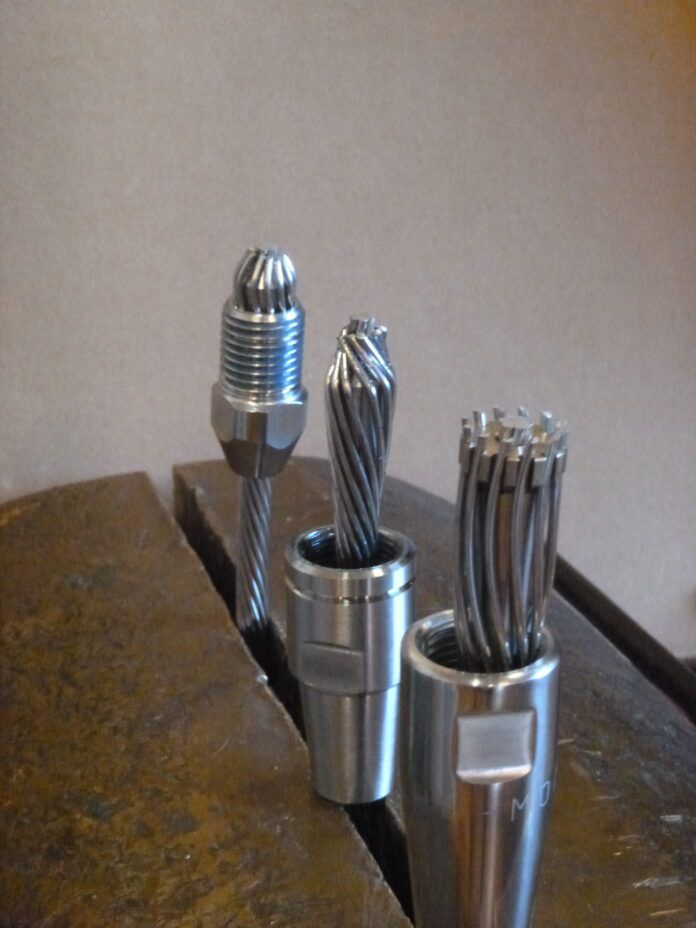 Mechanical terminals allow sailors replace a broken shroud or even re-rig their own boat  without hiring a professional rigger with a swage machine. Although the process of fitting a mechanical terminal is within reach of a competent do-it-yourself, there are a few pitfalls to avoid. Fortunately, we had the help of the late Brion Toss, one the most respected riggers in the business, to review the steps involved in forming a mechanical fitting for us in 2016. If you are contemplating re-rigging this fall or winter, this excerpt from the original report should put you on the right track.

All of the mechanical terminals we tested in 2016 are based on the same assembly concept: The rigger opens the cover yarns, and then slides a wedge over the core yarns, near the end of the wire. The rigger closes the cover yarns over the wedge, and then, screws together the two outer parts of the terminal over the wedge, compressing the material, and thus generating friction. Simple, but like any assembly, it can be done wrong. Here are a few things to watch out for when assembling a mechanical terminal.

Different terminal brands have different requirements for how much core shows past the wedge. Too much or too little core show can compromise terminal efficiency. It can also make assembly more difficult. Read the instructions for your brand.

If you cut the wire with shears, you are likely to bend at least some of the ends and will have ends of different lengths. This will make it harder to arrange or bend them evenly. Uneven ends are also more likely to snag, resulting in twisted yarns and/or sideways bend. Either problem can compromise efficiency. Uneven ends can also snag and be pushed backward into the socket, resulting in one or more loose yarns on the standing part. Instead of cutting with shears, you can put tape on either side of the cut site, then use a hacksaw to cut the wires; its a cleaner way to go.

The cover yarns need to be opened up, so that you can get the wedge onto the core. There should be no twists; the yarns should open up like a flower. Otherwise, you will create distortions in the standing part that weaken the wire.

The wedge has one or more slots in its side, allowing the wedge to compress onto the core yarns, generating friction there. With Sta-Lok and Norseman, it is possible to get a cover yarn stuck in the wedge slots. If this happens, the wedge wont be able to compress onto the wires core, and the core wont be able to take its share of the load. If a rigger slides the wedge too far onto the core, the projecting wire ends of both the core and the cover will mash into the inside of the terminal, deforming the wire. If the wedge is not on far enough, it can slip off the end of the core and fail to compress the core. In addition, the cover yarns will not have the proper amount of bearing against the wedge. Each brand requires a different amount of core to be showing.

The wedge is a key component for all of these terminals. Every manufacturer makes wedges for different wire constructions, as well as different diameters, and each brands wedges have their own shapes and wall thicknesses. Dont substitute wedges from a different brand. Even if you have the right brand of wedge, it is possible to fit the wrong wedge to a wire, and if you do, the cores contribution will be affected. Even worse, the wrong wedge can also reduce the covers efficiency, allowing it to pull out of the terminal. Sta-Lok now inscribes the wedge information on the wedge, and Hayn color-codes its wedges, but the user needs to confirm that each wedge is the right one for the project.

Sometimes when you cut a piece of wire rope, the core withdraws a bit inside. This is a very bad sign, as it means that the wire was not properly balanced at the factory. In use, this will tend to put a disproportionate amount of load onto the core, lowering the breaking strength, and thus the safety factor. In addition, it will make it difficult to get the correct amount of core show and still keep the cover yarns short enough that you can get the terminal together. If your wire rope withdraws its core, return it. We also recommend checking the end of the wire when it is still on the spool.

Because assembling this type of terminal involves screwing together two pieces of stainless steel under some appreciable load, there is a danger of galling. Basically, the two surfaces deposit molecules onto each other, literally welding the pieces together. It is amazingly easy to gall a terminal so thoroughly that the only way to get it apart is with a metal-cutting saw. Lubrication of the threads would certainly prevent galling, but that would run counter to the very important need to secure the terminal with Loctite or a similar adhesive, to keep it from coming apart. Fortunately, Loctite acts first as a lubricant and acts last as a glue.

Most terminals of this type are characterized by exquisite machining, but every once in a while, you get one with rough threads that grind and rumble when you assemble the pieces (squeaking is normal). The threads might look smooth to the uneducated eye, but the rumbling is made by little bits of metal-which can defeat any lubricant you put on there, and then you are back at galling. In extreme cases, crumbled threads can lead to terminal failure. If the threads feel rough, return the terminal and ask for a smooth one. One of the reasons we prefer Hi-Mod terminals is that their threads are rolled, rather than cut. This makes them notably smoother. (Beware of inducing galling here also. Cutting wire next to the terminal can cause dust particles to deposit on the threads.)

When screwing these terminals together, it is important to run things firmly home. But once the yarns are properly seated, and you feel solid resistance, there is no point in adding more than a quarter-turn.

Sta-Lok and Norseman recommend sealant inside their terminals to prevent internal corrosion. Hayn maintains that this is not necessary with its terminals. Brion Toss uses 3Ms 4000 inside all mechanical terminals in his rigging shop-enough that some is forced out the end of the terminal at final assembly. We tested with and without sealant, with no change in end results.

When assembling a screw-on terminal: 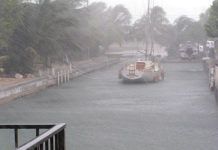 The Ego-trap of Riding the Storm Out