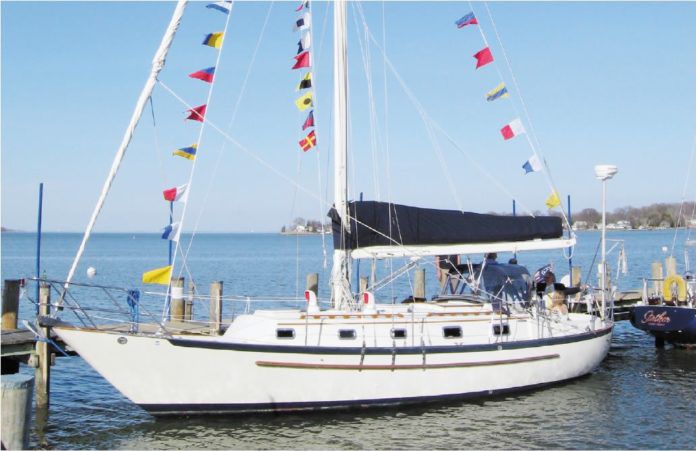 In regard to your July 2015 article, Keeping Water Clean and Fresh: We have well water at our dock, and the water tanks in our boat are integral to the hull. How does this impact the process for cleaning and sanitizing?

Well water presents two special challenges. First, the water is not chlorinated, so there is a significant chance of it going bad in the tank. Even good wells can go bad if they are left stagnant, and the tank almost certainly contains some dirt. Second, most wells near the ocean have some degree of saltwater infiltration and generally elevated sulfate. This can lead to a sulfurous smell and taste, since bacteria under aerobic conditions (a sealed tank) convert sulfate to hydrogen sulfide. The cure for both is annual sanitizing and continuing treatment (1 to 2 parts per million residual after reaction time) with chlorine bleach or equivalent chlorine-containing preparations.

As long as the tank is physically clean (water filtered during filling, and scrubbed and rinsed annually), there is no special sanitizing requirement. As for the sulfur taste, bleach will oxidize the hydrogen sulfide back to sulfate (harmless and tasteless), and a carbon filter at the tap will remove the excess chlorine.

Unless the water is used very rapidly, chlorination is generally required with coastal well water to prevent off tastes. Carbon alone is not effective.

For more on cleaning your water tanks and keeping the water tasting fresh, check out our multi-part series on clean water in the June 2015, July 2015, and August 2015 issues. We also offered a how-to on a do-it-yourself water filter in the April 2015 issue.

In response to your October 2014 Chandlery on Awlgrips Awlwood Varnish: I brushed on Awlwood four years ago, and it still looks pretty good.

The product was originally formulated by Uroxsys in Auckland, New Zealand and called Noroxsys, and Awlgrip purchased the formula, renaming it Awlwood. We bought the product on the change over and probably got the first Awlwood tins in Australia in 2011.

I applied six coats over two days in 25 knots of wind and full sun. It went on like a thick enamel paint with workable time using a brush, per instructions. Ive done zero maintenance on it since, and my boat lives in hot, humid conditions year round.

I am so glad to have a product for teak that works for more than a year. I love it and will use it again.

I read your July 2015 Chandlery article about the latest bosuns chair alternative, which was $495. I have for years used a saddle from New Tribe (www.newtribe.com) in great comfort. These folks have everything for recreational tree-climbing-an activity that implies youre going to spend an extended time in the saddle and are doing it for fun; these are made for people who camp in trees!

I find the New Tribe equipment eminently well thought out, comfortable, and cheaper by far than the marine stuff. Their state-of-the-art saddle is $199.

They also have a great line bag that allows me to store over 100 feet of line with never a tangle. I suggest you test some of their products next time you look at mast climbing alternatives.

Well definitely add the New Tribe saddle to our next round of bosuns chair tests.

Which bottom paints might be recommended for fresh water?

All of those we Recommended in the March 2015 issue, except for Interluxs Micron 66, are fine for freshwater, but most will be overkill.Many fresh water sailors weve talked with like Interluxs VC17 and Pettits SR-21, which are specially designed for this. If you go back to past tests (March and October issues each year), youll find data on these paints. We didn't include them in the last round because they did so poorly in salt water.If you look at paint performance by type (freshwater, eco-friendly, low-copper single-season, water-based paints, etc.), freshwater paints are usually the first to go (see PS March 2012 online).

Another article that might be helpful is the March 2014 report on favorite bottom paints by region. We also suggest the Aug. 31, 2011 InsidePractical Sailorblog post on choosing a bottom paint.

I found your July 2015 editorial, Pitfalls of Going Paperless, regarding the Vestas Wind accident, to be highly pertinent and timely regarding a race series we are about to commence in the North Channel of Lake Huron. I would like to include a copy of the editorial with our Sailing Instructions as a cautionary tale. If you have concerns regarding my making copies of this single page, please let me know.

PSs editorials are always public (free to non-subscribers), as are the Inside Practical Sailor blog and our Waypoints newsletter; youre welcome to share these digitally. To print and distribute anything from the PS website or print magazine requires our publishers permission, as does posting online the subscriber-only articles. That being said, he is always happy to support safety-oriented projects such as yours. We also try to make many of our safety articles public for digital sharing and viewing after they have been in circulation for 18 to 24 months. For non-subscribers, the Safety at Sea ebook series is also a good buy (http://www.practical-sailor.com/books).

In response to the May 19, 2015 blog post on sealing mechanical rigging terminals: Any concerns about rust staining are unwarranted. Such staining is probably due to transferred iron from the tools used to cut the wire and/or assemble the fitting. Most commercial 304 stainless parts go through an iron removal (electro-polish or passivation) to remove transferred iron from the manufacturing process. That can’t be done at the assembly step in the boat yard.

The May 2015 boat review of the Pacific Seacraft 31 gave the incorrect hull number for the boat we tested; it is hull number 127. And while the test boat has a Selden in-mast furling system, the gear is not standard.