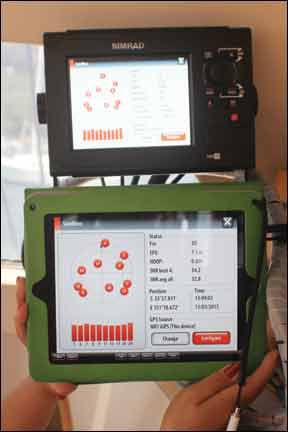 Being natural-born skeptics, Practical Sailor testers are always pleasantly surprised when we test gear that meets-or almost meets-the hype from its makers and marketers. And that was just the case with Navicos GoFree WiFi wireless networking device for Simrad products. We recently field tested it, and found that aside from a few niggles, the GoFree lives up to makers claims, is easy to install, and works well-straight out of the box!

The GoFree WiFi device allows users to link their Simrad chartplotter-and the boats whole Ethernet network-to some mobile electronics. The GoFree allows two-way communication between Simrads NSS chartplotters and multi-function displays (MFDs) and mobile apps on an iPad, iPhone, or later-generation iTouch-essentially turning the tablet or phone into a mobile remote command station for your chartplotter. The GoFree interfaces with the MFD via an Ethernet connection and the mobile devices using WiFi.

Navico introduced the GoFree some months ago, but the Simrad parent company did not actually release it until late December 2012. The delay was apparently due to software issues, some of which have not been completely resolved.

To test out the GoFree and the new networking system, Practical Sailor installed one aboard a Lightwave 38 catamaran and used it to pair a Simrad NSS7 chartplotter (PS, November 2012) with a first-generation iPad while cruising Australias coastal waters.

The GoFree comes with one power cable and one Ethernet cable. The test boat already had an established Ethernet network for its on-board electronics, so testers simply daisy chained the GoFree into the existing Ethernet loom and connected it to 12-volt power.

The mounting location of the GoFree is not critical, and with its IPX7 water-resistance rating (submersion to 1 meter for 30 minutes), it can be mounted just about anywhere. Because weve had radio frequency interference (RFI) issues with some Bluetooth devices, we tested the WiFi GoFree for interference with our onboard VHF radios, LED lights, and magnetic compass and found no RFI problems.

We wired the test unit under the dodger on the test boat, alongside the broadband interface box. The GoFree is not big, considering what it achieves: It measures 6.75 by 2 by 2 inches and has a 5-inch antenna. We did not find that the orientation of the antenna had any impact at all on performance, but the iPad was never more than 25 feet from the GoFree unit.

The unit has two LEDs, one indicating the Ethernet circuit is live and one for power; once everything was up and running, testers found these to simply be a distraction. Power consumption of the GoFree unit is a measly 200mA at 12 volts, but you also have to account for charging your mobile device on board, if youre cruising.

Install instructions are minimal (one sheet), but the process is simplicity defined; downloading the free Simrad GoFree Viewer and Control App and updating the related software will take longer.

The GoFree is designed to interface with the iPhone 5 but will operate with earlier models, any iPad, and third generation or later iTouches, so long as the device is running Apple Operating Systems OS5 or newer. Unless you have the iPad3, you will need to upgrade the OS. A word of warning, to ensure that updating the operating system does not wipe out all your files and apps on the device, be sure to back them up to the iCloud or a hard drive before updating the OS. (We learned this the hard way and lost most of the 12,000 photos we had stored on the iPad; luckily, we had them backed up on our laptop.) Then, youll need to download the Simrad GoFree App to your iPad, iPhone, or iTouch. The app is free and available from the Simrad website or iTunes store. There are other, third-party apps on the Simrad site, but these are not free. Unless youve already updated your Simrad MFD software this year, you most likely will need to do that as well. (The new software was dated Dec. 20, 2012, and any MFD purchased prior will need to be upgraded.) This is a simple process: download the free update (RTM 2.5) from the Simrad website to a micro SD card and then transfer it to the MFD. Installation instructions for uploading the software have not been amended, and the same fault we found with downloading an upgrade for the Broadband 3G and 4G radar still exists (PS, December 2012). The instructions clearly detail that the MFD should not be switched off and that the upgrade is automatic. We found that after loading the update, our NSS7 shuts down and needs to be manually restarted.

Once the Apple device software is OS5 or newer, the GoFree app is loaded to the device, and the NSS software is updated, youre ready to roll. When interfaced, the iPad works almost exactly as the NSS. Most of the functions are identical, there is a control bar at the bottom of the iPad screen that acts as the buttons of the NSS. Whatever is available on the NSS screen is instantly available, and controllable, on the iPad with all commands being made to the iPad touchscreen (or the NSS as usual). The only exception is autopilot controls, which are currently locked. Apparently, the ability to control an autopilot was written into the Simrad software update, but Navico has not yet decided whether to allow a third-party device (i.e. the iPad) to control such important tasks as steering a boat.

Testers found it possible to access data from and to control the NSS via the iPad from anywhere on the 38-foot boat. Navico engineers suggest the actual range is 100 yards, but we did not test the maximum. This longer range (which may be useful for a mega-yacht captain) is one of the benefits of using WiFi over Bluetooth to interface devices.

The iPad can access and control radar, sonar, depth, charts-altering scale, adding and annotating waypoints, monitoring speed over ground (SOG)-anything the NSS7 can do and more. It even offers full interactivity with Simrads Sonic-Hub entertainment options and Structure Scan imaging.

In using the GoFree app, we found that we needed to close down and re-boot the iPad each time we wanted to use it with the Simrad system, but the iPad automatically accesses the GoFree and simply requires accessing the Simrad App to operate.

The GoFree supports multiple devices being interfaced simultaneously with the MFD-so you can have your iPhone and your iPad synced to the MFD at the same time-but having only one compatible device, we were not able to test this. Besides, potentially having more than one person able to control navigation electronics at the same time seems like a dangerous idea to us. Owners, however, can set permissions for multiple users and can restrict their abilities.

We found two notable differences in using the new software, but there may be others. Prior to updating the Simrad software and installing the GoFree, we had two functions under the System controls of the NSS7 that have now disappeared: Audio and Screen Capture. Screen Capture allows you to snap an image of a screen, download it to a micro SD card, and then share it via email, etc. This is now actioned by pressing the Pages and Power keys simultaneously; it is no longer necessary to enable the Screen Capture function. Audio, which controls SonicHub, is now accessed by going to the System page, then selecting Advanced and then Features. Neither of these changes are documented anywhere that we found, including the downloadable NSS Operator Manual.

The GoFree WiFi device retails for about $230 at West Marine and carries a two-year warranty. Is it a must-have for navigation? Absolutely not. But we found it very useful and worth the expense for those who can afford it and who already have a Simrad MFD and a compatible mobile device. Testers found the GoFree system intuitive, easy to use, and very convenient, powerful, and useful while cruising.

Provided you have an iPad, the GoFree gives you access to a mobile, remote 9-inch screen for navigation-a major improvement on the 7-inch screen of the NSS7 and also better than the 8-inch screen of the NSS8. Its also cheaper than buying a second display-even if you have to buy an iPad. The downside is that iPad isn’t as robust as a marine MFD. However, you can locate the fully waterproof NSS MFD at the helm, and use the non-waterproof iPad in the shelter of the cabin or dodger. (We recommend getting a waterproof case or bag for your digital tablet or smart phone; see the November 2012 issue for our top picks.) You can use the iPad to do chart work at the saloon table or nav station, with plenty of room for paper charts and guides. Having a remote display also allows anyone on board to monitor any function of the boat from their berth, which might allow off-watch skippers to make fewer cockpit visits to check on things.

Based on our experience: If we chose to install a Simrad/Navico navigation system onboard, we would mount an NSS7 at the helm (rather than the NSS8), install the GoFree unit, and with the money saved from not buying the NSS8, wed buy an iPad (and a waterproof case like the LifeProof) to use with the system.