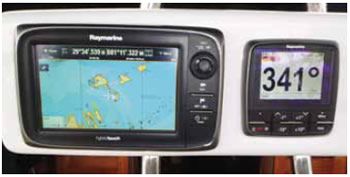 In December 2013, we installed Raymarines e7D multifunction display (MFD) on our test boat, a 1978 Union 36, as part of long-term testing and evaluation during 2014.

For a more detailed look at the product, see our initial report in the July 2012 issue online. Heres a quick recap. The e7D is part of Raymarine eSeries HybridTouch line of multifunction displays (available in 7-, 9-, 12.1- or 15.4-inch display sizes) that combines touchscreen interface with a joystick-like unicontrol and features Bluetooth and WiFi connectivity. After our first report, Raymarine identified a touchscreen issue with some e7 and e7D plotters (see PS March 2014 online). A campaign to replace problematic devices with refurbished units is ongoing.

All but the largest model features a built-in GPS, and the e7D, e97, and e127 models are equipped with a 600-watt digital sonar. The eSeries can be expanded into a navigation network with multiple displays-including everything from video to thermal night vision. The fishfinder functionality can be boosted with Raymarines CHIRP DownVision system, which uses compressed, high-intensity radar pulses (CHIRPs) to penetrate the depths and offer a very detailed image of the underwater bottom structure. According to Raymarine, the photo-like detail and clarity offers much more definition that a traditional fishfinder.

The e7 uses LightHouse II, Raymarines latest software for user interface. It is more intuitive than the earlier version, and we were able to drill down to the various features simply by using the on-screen prompts. We also liked the DataBar Auto-Hide feature, which allows users to open a drop-down display of key information (speed, etc.) or close it for maximum on-screen viewing with a simple swipe of a finger.

Wireless networking is another interesting feature the e7 brings to the table. After downloading the Raymarine control app, we were able to stream a duplicate of the e7 screen onto our iPad. This allowed us to build routes for the following days sail while sitting comfortably at the navigation station. You can also use the Bluetooth feature to remotely control the music functions of your iPod Touch, iPhone, or iPad.

The new Lighthouse II interface is more intuitive than the earlier versions, although touchscreen display suffered on a few occasions when we used particularly sweaty or rain-soaked fingers. Working the touchscreen in rough seas or when using fingers that werent completely cleaned after applying sunblock produced some interesting results as well. This is one of the reasons we like the hybrid approach, which works with gloves (as touchscreens do not) and also provides a backup. Technology and consumer tastes are constantly changing, however, and Raymarines new A-series displays, which we look forward to testing, do not have the unicontrol.

Bottom line: The e7D has held up, and the Lighthouse II software is clearly more intuitive than earlier versions. Hiccups in the touchscreen interface appear to have been resolved, although some consumer frustration still lingers. For those building around a Raymarine network, the compatibility of this MFD makes sense-as does the hybrid approach.