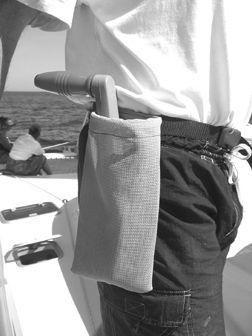 Kiwi Slides
No matter how beautiful or well-made working sails are, their efficiency is greatly affected by the manner in which they are attached to a mast or forestay. There are lots of lousy sails in use—partly because they weren’t very good to begin with or have been unmercifully stretched, soaked, and wrinkled—but even a lousy sail will function better than a good one if its attachment system is superior. As an engineer would say, sails are your primary source of propulsion, but they have to be set in place properly to work.

We’ve come a long way from hickory or iron mast hoops and rope grommets with parrels. (The bead-like parrels sometimes were made of lignum vitae, a wood so heavy and hard that it doesn’t float in water.) Hoops and grommets were not only picturesque, they were a quantum leap forward from lacing a sail on a spar. Striking sail was not easy for the Vikings.

Nowadays, most mainsails are attached to the mast with metal or plastic slides slipped on a metal track or with a bolt rope or slugs that fit in a groove on the mast. And most headsails attach to a wire forestay with metal or plastic piston hanks or snaps or, in the case of furling headsails, the roped or taped luff fits in small grooves in a foil slipped over the forestay.

The problem with the groove approach to either the main or headsail is that the tolerances must be tight. Spiders love to build their nests in these grooves. Dirt, debris, and salt can accumulate there. Then, the sail does not want to go up or down very easily. This is a problem and, in an emergency, it can mean trouble.

(Practical Sailor’s latest look at sail track lubricants appeared in the Nov. 15, 2003 issue; Elmers Slide-All was the top-rated product then.)

In addition, when a jib is equipped with a bolt rope or tape, the sail in use must be removed completely when the skipper opts for a substitute sail.

Now, there’s a new way, developed by a New Zealand company called Anzam, which is represented in the U.S. by Brian Cleverly, who also sells Reef Rite furlers. Called Kiwi Slides, this new system uses slugs to permit a jib to be pre-loaded, stored temporarily, all ready for hoisting, whether it’s the only sail on a single-groove furler or the second one in a twin-foil arrangement.

“What’s best,” Cleverly said about this product, “is that they make headsail handling easier … and safer.” The Kiwi Slides, which can also replace the slugs on a mainsail, are webbed to a sail by sewing the webbing directly to the luff of the sail or by looping the webbing through the existing eyelets or grommets. The slides—made of fiberglass reinforced nylon—have phenomenal breaking strengths, come in six sizes, and range in price from $2.70 to $4.84 each. They are, of course, standard on Reef Rite furlers.

Cleverly claims the new slides cut friction by 50%. Unlike luff tapes, where replacement is difficult if they fail, Kiwi Slides can be individually replaced and extras added if needed.

The accompanying photos illustrate the ingenious manner in which these new slides are assembled.

Handle Holster
‘Trimaran Jim’ Brown once built an experimental trimaran entirely of wood, with not a bit of metal in it. It weighed a ton and was meant to carry a ton. He named it SIB, meaning ‘Simple Is Best.’ Following that theme, the folks in Hood River, OR, who introduced Shockles (see “Chandlery” PS March 2004) present the Handle Holster™.

As shown here, it will accommodate nearly any winch handle, but also would do nicely for a satellite telephone, tools (for going up the rig), a handheld GPS, or almost any other small device that you need at your side while on board. The manufacturer tells us that some users have been known to carry a cold beverage or two in the Handle Holster. Fabricated in one size, it comes in two colors (gray or blue) and retails for $16.95, which includes the 48″, snap-on, adjustable belt. That may seem a mite pricey, but the product is well made of a tough polyester mesh that easily drains water and resists UV degradation.