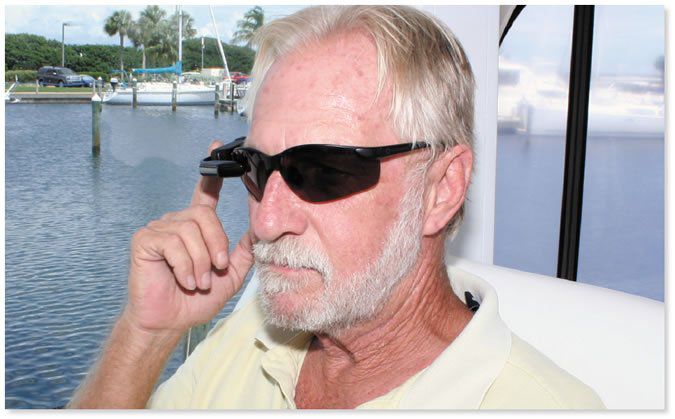 Garmin recently released a new-age-looking boat-data display that will certainly appeal to technophiles and racing sailors. The portable, hands-free Nautix In-view Display attaches to the users glasses, making the data always visible out of the corner of the users eye while leaving him or her free to choreograph a race start or monitor the depth.

The unobtrusive, IPX7-rated Nautix display weighs just over one ounce and mounts at the temple (arm) of most glasses. Using Garmins ANT+ wireless technology, it pairs with a compatible multi-function display (MFD) and allows users to choose from 12 viewable color pages of data, each containing up to four data boxes. You swipe the side of the unit with your finger to scroll through the pages. Up to 20 Nautix In-view displays can be paired to a single compatible MFD.

Attaching the Nautix to your glasses is fairly simple. The mount is placed on the glasses arm near the lens and is secured using two sets of supplied bands; the display comes with four different band sizes to choose from, and it can be mounted on either side of the glasses. The Nautix itself is pressed onto the mount and rotated forward to lock it in place. Its flexible arm lets you bend it over the glasses lens, and you can rotate it up and down to give you the best viewing orientation. To see the data, you just have to make a slight shift of your eye while never losing visibility of the outside world. The Nautixs internal accelerometer properly orients the display, and a light sensor automatically adjusts the brightness.

Testers mounted the Nautix on a pair of polarized sunglasses, and found the data display to be clear, bright, and easy to read. Note that the Nautix wont work with every pair of glasses out there, but it can mount to most designs, including prescription glasses, and is viewable with most polarized glasses, depending on the angle of polarization. The glasses temple or arm also must have a wide enough surface to secure the Nautix. Wire frame glasses will not work.

Testers found the displays set up to be easy and intuitive, although our test unit had initially been set to Russian as the preferred language and resetting it to English required Garmins assistance. The finger swiping takes a bit of practice to get used to, but after about 10 minutes, it became second nature. Pairing the Nautix to our MFD was simple (similar to the Quatix watch), and once paired, it automatically recognized the MFD and synced with it as soon as the Nautix was powered on.

The displayable data isn’t infinite but its sufficient and includes racing and sailing features like start line information, countdown timer, burn time, wind angle, and wind speed. To use these features, the MFD must be configured as a sailboat. Other data available include distance and bearing to waypoint, heading, speed over ground, course over ground, water temperature, depth, and engine RPMs.

PS was impressed with this piece of wearable technology that shares its lineage with the similar Garmin Varia In-sight Display used for cycling. Although at $400, the Nautix isn’t cheap, the advantage of always having your critical data instantly available to you, wherever you are on the boat, is a plus. For racers, the ability to equip the crew with specific data displays could give you a tactical advantage. Everyone will be able to see the distance to the mark or the remaining burn time.