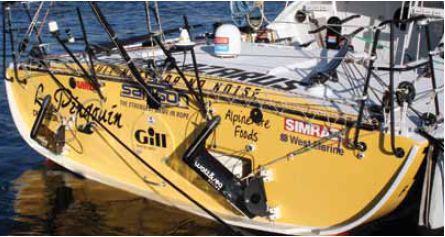 If the recent Velux 5 Oceans Race yielded one breakthrough, it would have to be the hydrogenerators from Watt & Sea. Racers Brad Van Liew and Zbigniew Gutkowski both used these devices. The sailors not only found themselves reliant upon the units, but were impressed by their capability and reliability as well.

Based in La Rochelle, France, Watt & Sea (www.wattandsea.com) was founded by Yannick Besthaven, a former long-distance solo sailor who developed the product for his participation in the 2008 Vendee Globe race. Besthavens company currently manufactures two models: a carbon-fiber racing version that retails for $19,700 and an anodized aluminum cruising version that lists for $7,200 (a pair runs $12,455).

According to the makers specs, the cruising version begins generating power at just 3 knots of boatspeed. At 5 knots, the hydrogenerator reportedly produces enough juice to run all of the electronics (computer, instruments, autopilot, etc.) on a typical cruising boat. At 6 knots, the company claims, users can switch on water pressure and refrigeration. At 8 knots and above, the device reportedly generates 500 watts.

Gutkowski said his experience with Watt & Seas 17.6-pound cruising model was entirely positive. He noticed negligible drag from it and said: When the boat goes over 10 knots, that thing runs all of the electrical equipment on board: radar, navigation gear, electronics, and autopilots.

The racing version that Van Liew tested is even more efficient because its slightly lighter (14.6 pounds) and its variable-pitch propeller blades cause less drag. This model requires a minimum of 7 knots of boatspeed to begin generating power, and Watt & Seas literature claims that it will generate 500 watts at 12 knots.

The company claims that the cruising model will recharge a 200-amp, 12-volt battery to 50 percent of its capacity after 10 hours with a 5-knot boatspeed, and after only three hours at 8 knots. Van Liew experienced some overcharging problems with the prototypes he initially tested, but ultimately learned to extract the units from the water after his battery bank had been sufficiently charged. (The manufacturer said it has added a freewheeling feature to the system, which engages once the batteries are fully charged.)

Once Watt & Sea assembles the units, theyre pressurized with oil to prevent water seepage. The alternator is encased in resin, and ceramic-carbon gaskets are used between the main housing and the propeller unit. Each model is sold with a lifting bracket (intended to be mounted on the transom) and comes with a one-year warranty. The company also sells replacement props, converter units, and brackets.