At the U.S. Sailboat Show in Annapolis last fall, I paused at the newly launched $2.5-million Gunboat 55, Rainmaker, felt the hole in my pocket and moved on. I have always had a weakness for hedonistic follies, but to launch a go-fast carbon-fiber condo into a North Atlantic gale isnt one of them.

In 2000, I took a spin on the prototype Gunboat 62, Tribe. After several thrilling double-digit reaches across Narraganset Bay, I realized that Im just not in that big of a hurry. A tortoise-like, 28-day crossing of the Pacific with my wife, Theresa, is more my cup of tea. The notion that a cruising couple can simply out-sail the weather never held much sway with me.

In February, Rainmaker was dismasted and abandoned off Cape Hatteras, N.C. The boats sudden demise was a reminder that we all end up in heap of carbon someday; Rainmaker just got there sooner than expected. No amount of money, it seems, can guarantee a winter passage in the North Atlantic.

The U.S. Coast Guard plucked the boats owner, venture-capitilast Brian Cohen (an angel investor who scored big with the social media site Pinterest), his son, the delivery skipper, and two paid crew members from the boat.

The Gunboat line is the brainchild of Peter Johnstone, the son of Bob Johnstone, who along with brother Rod, launched J/boats. To say that Peter, his brothers, and cousins are prominent figures in the U.S. marine industry is like saying the Manning brothers dabble in football. Helping lift the Laser class to Olympic status, and helming Steve Fossets 105-foot cat, Playstation, are just two of the bullet points on Peters long resume. His entry into cruising catamarans began in 2000 with Tribe, which he sailed through the Caribbean with his family. The Gunboat website credits him with more than 100,000 ocean miles.

Since Tribe, Gunboat has launched models ranging from 48 to 90 feet. Later this year, the company is set to splash its first foiling catamaran, the G-4, a boat that will lift itself out of the water like last years Americas Cup boats.

I genuinely wanted Rainmaker to succeed. And why not? To many, its quest is the Holy Grail of cruising. As a 2014 article in Forbes magazine trumpeted: You can have your martini and 30 knots, too. Judging by the accompanying photos, youd almost believe it possible-were it not for the inconvenience of the sea.

This is the second Gunboat dismasted in less than two years. Shortly after a record-setting 24-hour run of 427 miles in the 2013 Transpac, the rig on the Gunboat 66 Phaedo toppled down with a spinnaker set in about 18 knots. According to Johnstone, Rainmaker was dismasted in a microburst of 70 knots.

Building a cruising cat of the Gunboat 55s weight and dimensions requires an intimate understanding of composites. Virtually all of the structural members rely on carbon-fiber. Although aerospace contractors can afford the required expertise, carbon-fiber yacht construction often yields variable results.

A challenge with big cats is the wracking of the hull that can increase spar compression, an achilles heel in carbon-fiber (imagine the spar as an arrow in a flexing bow). Huge sail area and high speeds amplify any human error. (Gunboat claims that a crew of one can sail the 55.) Given these hard-to-quantify variables, Rainmakers spar-makers Hall Spars and Phaedos spar-maker Marstrom had tall orders. And loads are just a start. Eric Sponberg, a naval architect specializing in carbon-fiber post mortems, illustrates what else can go wrong with carbon masts on his website (www.sponbergyachtdesign.com).

Gag orders are common in yacht insurance settlements, so how much well learn from the accident is unknown. My hope is that Cohen might see that a check to the Coast Guard Foundation (www.coastguardfoundation.org)-one of many nonprofit groups indirectly responsible for bringing him and his son home alive-would be an honorable gesture. Others who miscalculated Cape Hatteras don't have this luxury.

[Update: Since this editorial was written, Gunboat skipper Chris Bailet did an extensive interview with Sailing Anarchy providing details about Rainmaker‘s loss.] 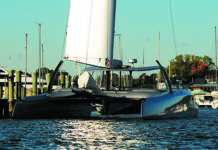 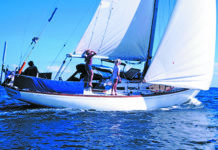 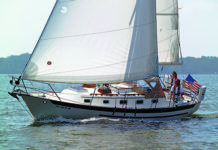