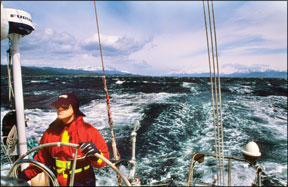 It always seems that a storm rolls into Annapolis, Md., just in time for the United States Sailboat Show. Held in October, the annual exhibition is the nations biggest sailboat-only show.

Until this year, my favorite show was in 2006, when a 40-knot gale whipped into town, and the floating docks rolled like a Nantucket whaler with her decks awash.

With the wind and spray lashing the show tents, boat buyers defiantly carried on, one hand groping for a lifeline, the other grasping the checkbook.

This years storm was of a different sort. Theres something eerily soothing about a large crowd of people ogling new boats while the world markets go into a death spiral. During the shows opening day, five televisions in the waterfront bar Pussers Landing tracked the Dows precipitous plunge. In one fell swoop, my boys college fund and any hope of retiring before Im deaf as a post were carried off in an avalanche of debt. To my surprise, the people around me seemed preoccupied with only boats.

By all appearance, sailors were dealing with the economic storm of 2008 the same way they survived the slippery docks in 2006. They were buttoned down, but happy-sipping dark and stormies, thumbing through cruising guides, checking sightlines from the helm of 50-foot sloops. They were talking about chartplotters, EPIRBs, anchors, and turnbuckles, anything but the world outside. They were, like you and me, a little bit mad.

These days, there is something to be said for dementia.

Which leads me to Evans Starzinger and Beth Leonard, whose tireless work in the remote fjords of southern Chile yielded our reports on anchors and cold-weather gloves in this months issue. While most sailors dream of tropical islands and warm breezes, these two-time circumnavigators thrive in some of the most challenging cruising areas of the planet.

“I don’t like the heat,” Beth explained two summers ago when the pair had paused in San Francisco. This made good sense to me.

But try to explain an affection for charging past the 50th parallel to your average suburbanite, and watch what happens. More than likely, their eyes will widen and theyll give you a 3-foot berth.

Whatever storms may lie ahead, I am buoyed by this thought. Cruising sailors are an independent lot. Give us some propane, some water, and provisions, and well be fine for weeks at a time. Let the rest of the world think were wing nuts. The mess were in betrays the truth: The loony bin, as any sailor knows, begins just north of the high-water mark.