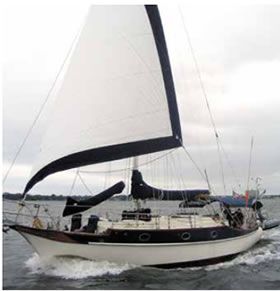 With more than three decades of hard use behind it-first in the charter trade and later in private ownership-the CSY 37 has very few secrets. All its warts are well exposed; as are its strengths. About two-dozen current and former owners responded to our survey, and we saw many consistencies in their comments. Most owners praised the boats rugged construction and stability and lamented its upwind performance. On the whole, the boat delivered what they expected of a cruising boat: namely a boat that would get them (and a fair amount of gear and provisions) safely and comfortably to their destination. Nearly all of the respondents had the owners version or B layout, and praised its livability. The following summaries and comments are representative of the majority of responses we collected.

Very few owners gave the boat better than fair performance. Most were critical of the boats windward ability, giving it a two on a scale of one to five, with 5 being the best. As one owner summed it up, The boat needs wind of high velocity-15 knots or greater-to perform.

Comments on the boats ability to balance were mixed, with the average rating being three on a five-point scale. One owner gave it excellent marks, saying it balances well with the exception of heavy seas. Another said he had been unable to reduce the weather helm.

Owners unanimously agreed that the boat was a bear to back down under power. Most owners commented that the Perkins 4-108 provided adequate power for the 20,000-pound hull, although one owner pointed out that it struggled when powering against 20 knots of wind, something that could be said of many boats of this proportion.

Three-bladed props are the norm, and several owners had invested in larger diameter props, with 16- to 18-inch being recommended diameters, with the pitch ranging from 10 to 12 inches. The most satisfied owner in our survey reported having an 18-inch by 12-inch prop.

One owner summed up the assessment of performance under power: It has a poor turning radius . . . I believe the production prop (16 x 10) caused it to be underpropped. I now have a 16 inch by x 12 inch prop.

Nearly all the owners in our survey said they felt like they got a good deal on the boat, even though it was considered expensive at the time it was introduced. They praised the interior woodwork. A few reported gelcoat spider cracking. Although these boats were built before the gelcoat blister pox reached epidemic proportions in the 1980s, minor blister issues have been reported in CSY boats. However, none of the owners reported them in their particular boat (it was not clear how many had been previously treated). How much value there is in a CSY 37 will vary from boat to boat. The hulls themselves seem to be structurally sound, so the condition of the onboard systems and overall maintenance will be the factors that separate a good deal from a great one.