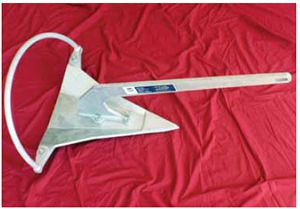 Late last year, we had our first look at the bolt-together Mantus anchor. Although we liked the design, and prices were favorable (around $330 for a 35-pounder), we raised concerns about the shank strength, which by our estimation was the weakest of all anchors of a similar design.

At that time, Mantus told us that they had been working on an upgraded shank. Our report apparently lit a fire under that project, and the company quickly introduced a new, improved shank made with 700-megapascal steel. All anchors sold after Dec. 8, 2013, have the new, stronger shanks. According to Greg Knutsen of Mantus, owners of the older models with mild steel shanks can get the new shank free-paying only the shipping costs. All parts carry a lifetime guarantee.

Made in China, the Mantus arrives as a flat pack in a robust wooden box (strong enough to travel halfway round the world). The anchor is delivered in pieces: roll bar, fluke, and shank. The owner needs to assemble the anchor himself. Assembly is easy and quick, using six high-tensile bolts and lock washers. When assembled, the anchor is completely rigid. The spring washers appear to hold the nuts securely. The anchor is a concave, roll bar-a cross between the Wasi Bugel and Rocna.

The fluke plate has a central flat portion and two slightly raised, folded, fluke edges. The toe is welded thicker and sharpened. The shank has a flange plate that is welded and perforated so that it can be bolted to the fluke. The flange is slotted and welded from both top and bottom. (Other anchors welded in this fashion include Anchor Rights SARCA and Excel, and the Spade, which can be welded on request.) We are always suspect of welds on anchors, but the welding on the Mantus looks professionally done.

The shank on our 35-pound (15-kilogram) model was slightly mis-alinged, but this did not seem to impact performance. Once assembled, the roll bar is very widely set to prevent clogging with weed, but its large relative size offers another place for sheets or guys to catch on the foredeck. This is not a deal-breaker, just something to be aware of. Mantus says its initial testing with smaller anchors (8 pounds) show that it can self right without the roll bar. We did not see that in our limited experience with the larger anchors, but we will be doing more testing-as will Mantus.

The anchor sets very well and develops holding capacity very quickly. We tested both the 15-pound and 35-pound versions. The 35-pounder seems more than adequate for up to around 25 knots for our 6-ton, 38-foot catamaran. The problem is that we can’t carry a roll bar anchor without some very expensive modifications.

We tested the anchor in both soft mud and a variety of clean sands, and it works well in all environments so far. We have not yet tested it in weed, nor a hard seabed. We also have not yet had time to test it in trying conditions. As with most roll-bar concave anchors, the Mantus does tend to collect mud.

The Mantus has obvious advantages over other concave roll-bar anchors in that it can be disassembled, making it much easier to store as a spare or stern anchor. Since a disassembled anchor in a locker or belowdecks is relatively useless, however, we see this as more of a boon to shippers than to cruisers.

In previous issues (PS, April and May 2013), we also questioned the use of bolts to attach the shank to the flukes. Mantus engineers said all its anchors are shipped with Grade 5 high-tensile 800-megapascal bolts, which are more than adequate for the loads, according to their engineers. However, the bolts on our test anchor were clearly stamped 307A, a lower grade, with a lower tensile strength. We recommend that all Mantus owners confirm that their bolt heads have the markings that identify it as a Grade 5 or higher bolt. A Google-search determining bolt grade will turn up several sources for reference