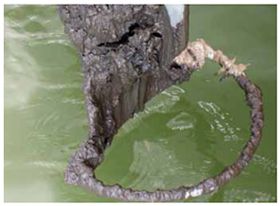 Our test anchors included a small, 11-pound Spade anchor, which we set using a chain winch off a beach in Pittwater, Australia. We set the anchors using two different rodes: 30 feet of 5/32-inch stainless wire strop that we fabricated using old lifelines and 33 feet of quarter-inch, short-link BBB chain. We extended each rode with 5/16-inch chain and aimed for length-to-depth ratio of a 5-to-1.

We loaded the Spade anchor such that it set in clean, soft sand under water at the beach edge. We then increased load until the anchor dragged under a steady load. The anchor remained under the water at all times. We tested with the wire and then the chain rodes attached directly to the anchor, using the same shackle. To compare performance, we measured not only the distance each anchor dragged before setting, but also how deeply the flukes were set. To measure depth, we used a steel probe to penetrate the sand. Each test was repeated three times with each rode.

We followed up the shore-based testing with on-the-water testing aboard a Lightwave 38 catamaran at an anchorage known as Jimmys Beach in Port Stephens, Australia.

For this second round of testing, we anchored the boat in 10 feet of water with a clean sand seabed. The anchor was buoyed to use as a reference mark. For this test, we used a 13-pound Mantus anchor. This anchor was also buoyed, so that it could be more easily monitored.

To judge how various rodes might affect the anchors ability to set, we used a 55-inch, 3/16-inch wire strop, a 65-inch length of 3/8-inch BBB chain, and a 59-inch length of half-inch BBB chain. We shackled each in turn to our spare 5/16-inch nylon rode. Each test rode was directly shackled, using the same shackle, to the 13-pound Mantus. We dropped the anchor from our dinghy (adjacent to the buoy of the main anchor), set the anchor gently and then dragged the anchor with both engines set at 2,000 RPMs (equivalent to about 675 pounds of load). We held the engines at 2,000 RPMs for 30 seconds. The load (675 pounds) and time (30 seconds) was sufficient to deeply set the Mantus in the chosen seabed.

We could measure how far the anchor had dragged during each setting exercise using the main anchors buoy as a reference. The test boat never held to the main anchor except to change test locations and rodes. To compare performance, we photographed each anchor as it set and measured the amount of wire and chain buried. We were working on a fairly accurate 5:1 scope, and we subsequently made a calculation of depth of set for the wire and 3/8-inch chain (though our calculations ignore any reverse catenary of the buried section of rode). We tested each of the test rodes three times.

Why not 5/16-inch chain? We chose wire and larger chains because we were looking for results. We suspected that any difference between 5/16- and 3/8-inch chains would be small, and because so many variables were involved in our test, such a closely matched comparison would be subject to misinterpretation. In general, we find that many published anchor tests are so fraught with uncontrolled variables that the conclusions are useless. We wanted to avoid this pitfall.

Why not bigger anchors? We used small anchors because we wanted to ensure we achieved ultimate holding capacity (UHC); in effect, we wanted to drive these anchors to the maximum depth the anchors were designed to reach. When an anchor reaches its UHC, it should burrow horizontally through the seabed under a constant load. We would not be able to burrow a 34-pound high performance anchor; the twin 20-horsepower engines on our test boat simply lacked sufficient power.

Interestingly, the results from the beach test and the on-board tests generally correlated. The beach test allowed more accurate quantification, was much easier to carry out, and allowed us to examine the test anchor and rode at any time during the procedure. Ideally, we would use an underwater video to monitor the on-board testing, but at this early stage of our ongoing look at a rode and anchors, we opted to invest our resources in other tests. (Look for a report on new galvanizing technology later this year.) 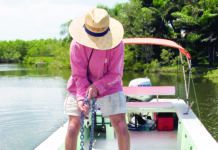 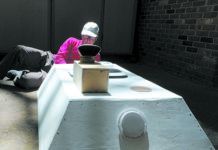