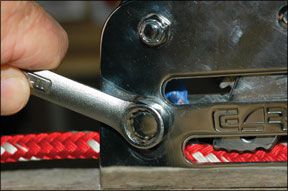 In the March 2009 issue, Practical Sailor bench-tested eight rope clutches, including a prototype from Garhauer Marine, a California-based marine hardware maker. Garhauer recently released its production model (13-11S) of that prototype, and we put one through the same evaluation the prototype faced.

The same New England Ropes’ Sta-set 7/16-inch polyester braid was used, and all testing was done on the same homemade jig, which led a 19-foot length of line between a strain gauge and a vertical anchor windlass capstan. Testers measured

the effort required to release each clutch with the line under 400 pounds of load and under no load. (See results in the Value Guide above.) We also measured how much each clutch allowed the line to slip (load loss) at 800 and 400 pounds of load. Testers noted the amount of effort required to pull an unloaded line through the closed clutch and the amount of abrasion after repeating the line slip test 25 times. (For more, see the online version of this article at www.
practical-sailor.com.)

Upgrades to the new production Garhauer include a stainless-steel side plate and a modification to the gear linkage, which in the earlier model rose above the housing and had the potential to catch loose clothing or stray fingers in its toothy grasp. The new iteration of the stainless-steel clutch buries the engaging linkage well inside the clutch.

We found that the rugged unit was easy to operate and could release a 400-pound line load with only a 9-pound handle pull. The clamping mechanism did allow moderate line slippage, but a load loss of 170 pounds was an improvement over the prototype’s 200-pound load loss. The tendency for initial line slip at 800 pounds also improved, from 1.1 inches (prototype) to 0.75 inches.

The results of the Garhauer’s no-load line-pull test were also favorable, and after adjusting the line lead for a larger diameter line (see photo at left), we found no

measurable friction with the clutch in the open jaw position. This test mimicked the free run of a released halyard or reefing line. The “lever down, gather in the slack” test required only 7 pounds of pull to haul in the slack line through the closed clutch. This was a significant improvement over the 13 pounds the prototype required.

The stainless Garhauer is strong and durable, and the sliding, extendable lever handle makes releasing a loaded line quick and easy. However, because the handle extends beyond the clutch body, it could be snagged by a flailing sheet or guy. Careful placement will lessen the likelihood of an unintended opening.

The Garhauer performed admirably, but did not unseat the Best Choice Spinlock XCS. However, its $49 price tag, 10-year warranty, and the longevity promised by stainless-steel side plates make it a good buy for those on a budget. For those able to spend the extra money, we still prefer the Lewmar D-2, a PS Recommended product.