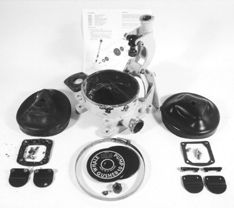 A photo in a report on manual bilge pumps (in the April 15, 2000 issue) showed a Whale Gusher 10 that a reader had consigned to the trash heap.

The reader, Gary Irving, of Newton, Massachusetts, said the Gusher 10 came on his boat, a 1979 Niagara 35, and probably was original equipment. The pump still worked, but Irving, planning a bit of overdue maintenance, bought a $40 rebuild kit.

However, when he loosened the hose clamp and removed the old diaphragm, he found a seized and badly corroded nut on the diaphragm pressure plate bolt, as well as seized machine screws that hold the flap valves in place.

Irving tried hard but eventually gave up, took the kit back, bought a new Gusher 10 and sent the old one to Practical Sailor’s Gear Graveyard. He joins a goodly list of those who generously participate in this “what-went-wrong” feature.

The Gusher 10 appeared to be, as Irving had decided, a “basket case.” However, like a sick puppy taken home for the weekend by a good veterinarian, the pump found its way to a staff member’s basement workshop.

In odd moments over a number of weeks, the offending bolts and machine screws were sprayed repeatedly and liberally with Corrosion Block, WD40, Red Devil and other penetrating oils…with concerted attempts to free them.

The nut on the diaphragm plate bolt (it’s the main link in the T-assembly that attaches the fork to the diaphragm) came loose after a couple of weeks. It was badly corroded, as was the end of its bolt. Only by cutting off a short piece of the old bolt and carefully cleaning the remaining threads with a hacksaw blade could the nut be made to work. The nut, severely eaten away, was usable, but was replaced by a new bronze nut.

Not wanting to fire up a torch and apply heat (which might set fire to the oil), it was decided (very reluctantly, you understand) to give up. However, as a last resort, an impact wrench was tried. It worked on the first screw tried, but it did not just pop loose. It resisted for the entire length of its threads. The remaining screw, equally tenacious, was backed out with similar hammering.

After an appropriate victory celebration, a check was made of the housing, the rocker arm, the threads, etc. Then, and only then, was a repair kit obtained.

The new screws for the new valves fit nicely and the diaphragm was easy to clamp in place. The rocker arm worked smoothly. The only problem was that in the kit is a small, short cylinder of rubber that is to be friction-fitted in the end of the T-assembly bolt. It serves as a bumper (and reduces noise) from the end of the bolt contacting the pump body on the down stroke. Because the end of that bolt was corroded (we cut away a bit of it) there was no cavity for the new bumper (we never found the old one).

All this proves is that if you’re patient, can take things home and work on a proper bench, the unreclaimable—even if neglected for years—sometimes can be snatched from the jaws of death.

Practical Sailor now has a reconditioned Gusher 10, good for another 10, maybe 20 years.

One problem: We’ll have to buy or rig up a handle; Reader Irving wisely kept the old one for a spare. 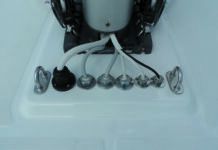