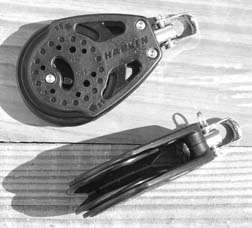 Readers have come to expect innovation from the folks at Harken Yacht Equipment in Pewaukee, WI, who pioneered winches fabricated from carbon fiber, windward-sheeting traveler cars, and the like. Though many of these high-tech products seem out of place on board cruising and daysaling boats, some find perfectly plausible applications outside of the racing arena. In fact, Harken maintains that its products are even more beneficial to cruising sailors than racers.

Another Harken innovation, which PS wrote about in the Sept. ’99 issue, is the company’s line of Black Magic Carbo Blocks, which are manufactured using fiber-reinforced Nylon resin sides to sustain the loads rather than metal. We wrote that these blocks save 30% on weight relative to comparable metal blocks, and offer a whopping 60% increase in load-bearing capacity. They’re also UV-resistant and non-corrosive. And you had Wisconsin pegged simply as America’s Dairyland.

Recently, Harken’s engineers adapted the Carbo Block body to the company’s line of ratchet blocks, both those that are manually switchedfrom ratchet-on to ratchet-off as well as the patented Ratchamatic® blocks that automatically switch on when the load reaches a pre-set level.

You might well ask, ‘Why would a ratchet block be of use to anyone other than a racing sailor?’ We put that same question to Dan Rondeau, who is in charge of technical service and new products at Harken. He told us that what he refers to as “drag-inducing blocks,” like these, offer an important advantage in a number of applications.

“With a ratchet block, when you uncleat a line, you can easily play the line out in control or haul it in. Let’s say you were heading out sailing in 15 knots with a furler. With no ratchet block, you let the furled sail run out unchecked. The furling line will spool loosely on the furling drum. Later, when you want to furl, or reef the headsail, the loosely spooled line scrapes against itself making it hard to furl. Using a ratchet block when unfurling, you can easily play out the furling line over the fixed ratchet sheave. Now the spooled line is tight and even, making it much easier to furl. In heavier air, when unfurling you can play out only enough line to your reefed point, see how the boat handles, make adjustments, and then cleat it. Without the ratchet function, you’re apt to be fighting the pull of the furling line with two hands.”

Ratchet blocks would seem to make sense in a number of other applications, particularly for flying spinnakers or gennakers, and for mainsails. When eased through a ratchet block at low load, these lines will run freely, and when hauled in, the ratchet element will require less strength on the part of the user to resist the tension on the line.

Harken sent us a 75mm Ratchamatic along with a 75mm switchable. The side plates on these blocks sandwich over the devices’ guts (sheaves, ratchet mechanisms, races and bearings), and are held in place by stainless rivets. Rondeau claimed that the Carbo material doesn’t chip when repeatedly struck against something like your boat’s deck, unlike blocks built of Delrin. Delrin, however, is what the bearings and sheaves in these blocks are made of, unlike the non-ratcheting Carbo blocks, which have bearings made of something called Duratron.

Both the Ratchamatic and the switchable blocks come with a swiveling post that can be locked in place so that the block stays either parallel to or perpendicular to the orientation of the attached shackle.

The control switch on the switchable blocks is sensibly recessed into the plate so that it won’t be inadvertently changed from off to on or vice versa by an errant movement on the part of anyone on board.

A valuable feature of the Ratchamatic block is that its “load-sensing” ability can be adjusted to suit the user’s strength or the prevailing conditions by simply changing the setting with an Allen wrench. And both types come with side plates pre-drilled for use as cheek blocks.

With a five-year warranty, we think those prices aren’t out of line. The mechanical advantage provided by the octagonal sheaves and ratcheting mechanisms on these strong, lightweight blocks would enhance a number of sailhandling maneuvers on most boats.