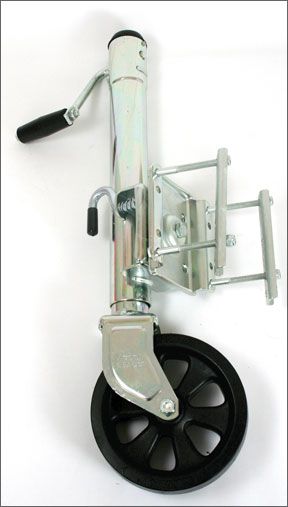 If you’ve ever owned a trailerable boat, you know that lining up the trailer coupler to the hitch ball on the tow vehicle can be a frustrating exercise. A good trailer jack with a wheel can make the job easier.

Castering—the ability of the wheel to turn in the direction you are pushing or pulling—played a large role in our evaluation of seven jacks from three manufacturers. But there were other factors, too, including price, corrosion resistance, and ease of use.

We limited our test group to swing-away trailer jacks with a 1,500-pound tongue weight capacity. Tongue weight is the downward force exerted on the hitch ball by the trailer coupler. In most cases, it is about 10 percent to 15 percent of the gross trailer weight, which is the weight of the trailer fully loaded in its actual towing condition. A trailer with a 1,500-pound tongue weight capacity can handle a boat-engine-trailer weight of 10,000 pounds.

All of the jacks utilize a side-winding cranking handle that is connected to interior gears. The gears move a screw that raises or lowers the shaft of the jack. A mounting plate, which is welded onto the shaft, is secured to the trailer’s tongue. With all of the jacks, four 4-inch-long bolts secure the mounting plate—two below and two above the trailer’s tongue. Two backing plates are attached to the bolts from the opposite side of the tongue. The mounting brackets on most of these jacks rotate to allow the jack to swing up and remain parallel to the trailer tongue during transit. A spring-loaded pin is pulled to rotate the jack.

The advantage of a pivoting or swing-away jack over a stationary one is—you guessed it—that it can be quickly swung out of the way. Stationary jacks must be hand-cranked to raise the wheel and shaft until the jack is a safe distance from the road. Rotating jacks, with their extra hardware, are more expensive.

All of the jacks we tested fit trailer tongues up to 3 inches wide and 5 inches high. All have 360-degree castering wheels. When in their “up” positions, the jacks hold the tongue from 24 to 27 inches off the ground.

From SeaSense, we tested the Road Warrior Mighty Wheel and the Road Warrior Big Wheel. From Fulton, we tested the Swing Away XP15L and the Dual Wheel XPD15L. From Dutton-Lainson, we tested the 6850 and 6851 Swivel Series, and the 6800 Dual Wheel. The 6851 is identical to the 6850 but has an independent castering wheel for easier movement. It has a fork-shaped bracket mounted to a high-strength plastic bearing whereas the wheel brackets of the other test jacks are welded directly to the inner tube of the jack shafts.

Fulton also makes a jack with an independent castering wheel, the XP15, and its Sharkskin line of jacks is made specifically for the saltwater environment. The company will soon be introducing a new 1,600-pound jack with a lifetime warranty. We plan to test these jacks and any other new products in the near future.

The jacks were mounted on a boatless, double-axle trailer with a 6,000-pound capacity. The jacks were secured to the trailer in exactly the same location on the tongue.

To evaluate how well they castered, one tester pushed and pulled the trailer tongue in different directions on the paved driveway of our workshop. The jacks were set at different heights during this procedure. Testers also evaluated the cranking arms on ergonomics, ease of operation, and handle construction quality. Testers noted the number of cranks it took each jack to go all the way up and all the way down.

We hooked our trailer to a tow vehicle and tried out each jack’s swiveling mechanism.

After this round of testing, we sprayed the jacks every day with salt water for two weeks. Several months later, we put them through the same drills again.

Following the spray test and weathering period, all of the jacks had some corrosion. This was to be expected, given the harshness of the saltwater test. The jacks from the same manufacturers had corrosion in the same locations (expected as they employ the same hardware).

Swiveling these jacks was fairly easy, but testers found that on the dual-wheel jacks and large-wheeled SeaSense Mighty Wheel, the wheel bracket hardware would bang against the trailer tongue if the wheel was not set in the right position.

Of the jacks we tested, only the SeaSense products included grease fittings for easy maintenance. Grease can be added to the other jacks by removing a cover on the top of the outer tube and inserting grease. Fulton has since added grease fittings to the models we tested, and they are optional on the Dutton-Lainson jacks.

The Big Wheel has a large single wheel—and the Mighty Wheel has an even larger one.

The Mighty Wheel’s wheel measures 8 inches with a 4-inch-wide tread. The Big Wheel also has an 8-inch diameter, but it measures 2 inches wide and lacks tread. Both wheels are impressive, but neither SeaSense jack castered as easily as other test products.

Both feature a wheel brake—something none of the other jacks have. The brakes were not completely effective. One tester was able to move the wheels with the brakes engaged, if he put some muscle into it.

Both SeaSense jacks have vertical travel measurements of 14 inches, more than any of the other jacks tested.

These jacks—and their hardware—are made of steel protected with a proprietary coating called SeaCoat. It did a good job of fending off corrosion—only the mounting hardware and part of the crank handle showed signs of corrosion.

Of the test products, the Road Warriors had the most comfortable handles (soft rubber) and the best grip, in our opinion. To release the jack and swing it up or down, you pull out a side-mounted, U-shaped lever. This swiveling mechanism worked well.

Bottom Line: These jacks scored well in all areas, except castering. They had minimal corrosion, and we like their comfortable cranking handles.

These two jacks seem identical but are quite different. As we noted earlier, the 6851 has an independent castering wheel. The 6850’s wheel bracket and inner tube (inside the shaft) are one piece. This design is stronger than the two-piece setup of the 6851, but the latter has better castering ability.

In fact, testers found that the 6851 castered better than any other jack in the test group. The 6850 also castered well, but not as well as its brother.

The zinc-plated steel of the Dutton-Lainson jacks did a good job of protecting against corrosion. The only spots were around the springs for the swivel-release mechanism and around the cranking handle, where it enters the shaft.

Cranking was fairly easy, but testers found the handles to be less comfortable than those of the other jacks. The jacks’ vertical travel of 10 inches was less than any other jack tested.

We liked the big beefy pull pin for the swing-away mechanisms on the Dutton-Lainsons. Moving them to their up and down positions was effortless.

Bottom Line: If you want a jack that casters well, the 6851 is a great choice, based on our testing. The 6850 is also a quality jack with a competitive price. But both need better cranking handles, in our view.

This is one of two dual-wheel jacks tested. The 6800 castered very well. Testers had no problem pushing and pulling the trailer tongue in all directions at all heights.

The 6800 also scored well in the corrosion-resistance department. It showed decay on only one of its mounting bolts and the spring for the swiveling mechanism (same as the other two Dutton-Lainsons).

Like its Dutton-Lainson brethren, this model’s handle is not up to snuff, in our view. Cranking effort was minimal. The 6800 travels two inches more than its siblings, but takes more cranks to get there.

Swinging the unit up and down was no problem, but the bolt on the wheel frame would hit the trailer tongue unless the wheel was turned in a certain position.

Bottom Line: There’s not much to complain about here—except the cranking handle and having to fuss with the wheel to swing the jack up alongside the tongue.

This single-wheel jack suffered from corrosion more than the other jacks tested. Corrosion was apparent at the weld points where the inner bracket meets the outer shaft. The entire spring-release mechanism was corroded (but still functioning), as well. Testers did like the jack’s rubber-covered release pin, though.

The XP15L castered well, but testers found that the cranking arm swings when you move the trailer.

The two Fultons were by far the easiest to swing up and down.

The large handle on the cranking arm is of average quality, consisting of a smooth plastic handle with no gripping material.

Bottom Line: This is a good jack at a good price. The swinging crank lever and the corrosion hold it back.

For a few dollars more, you can get a second wheel with the Fulton XPD15L. The wheels are a bit smaller than those on the single-wheel jack—
4-inch diameter compared to 6 inches. The XPD15L casters very well in all directions and when set at different heights.

The only evident corrosion was at the weld points where the inner bracket is fused to the shaft.

Like the XP15L, its cranking arm tends to swing during castering, and it has the same smooth plastic cranking handle and rubber-covered locking pin. Swinging the jack up and down was very easy.

The Fulton Dual Wheel XPD15L is our Best Choice—and at $75, it’s also our Budget Buy. It excelled in all four rating categories and comes in at a relatively low price, especially for a jack with two wheels. Its only drawback is the movement of the cranking lever during castering. The single-wheel Fulton would have earned Budget Buy honors but it just had too much corrosion. We also recommend the Dutton-Lainson 6851 Swivel Series, which we crown the king of castering. Its independent wheel really does make a difference. The Dutton-Lainson Dual Wheel ranks right up there, too, but you have to fuss with it when rotating it to its stored position.

We like the handles on the two jacks from SeaSense, but we wish the jacks castered better.