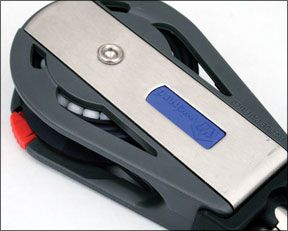 With an apology to dogs, blocks are a sailors best friend. Like dogs, they come in a variety of species, if you will: cheek, standing, fiddle, snatch, and one of the younger innovations, the ratchet block.

As you might expect, Practical Sailor routinely takes a spin through the world of blocks, keeping track of forward leaps (or backward stumbles, as the case may be) in terms of design and improvements. Our most recent features on this topic have delved into snatch blocks (Aug. 1, 2007, and an update Aug. 1, 2008). Since blocks do the heavy lifting on board, it is not surprising that over the years, our Gear Graveyard has been populated by a variety of broken blocks. Plastic bearings and sheaves (destroyed by UV rays), aluminum bodies (pulverized by galvanic corrosion), and stainless-steel shackles (cracked with crevice corrosion) are common failure points. For a broad look at the evolution of block design, the online version of this article at www.practical-sailor.comcarries a link to the archive article “Block Efficiency,” first published on June 1, 2002.

All of this brings us to the ratchet block, which, as mentioned, is one of the more recent innovations in block design. Heres how it works: Like a come-along, inside the block, attached to the sheave, is a toothed wheel and a pawl that engages the teeth in one direction only. When a line is engaged in the sheave and pulled, the clicking sound you hear is the pawl riding over a tooth and falling into the backside of it, thus preventing the wheel/sheave from turning in the opposite direction. Say youve led the spinnaker sheet through a ratchet block, preferably with at least a 90-degree turn (the more angle, the more holding power). The walls and facets of the sheave grip the line. A gust hits. The spinnaker tries to pull the line through the sheave, but the sheave wont turn in the reverse direction because the internal pawl is engaged in a tooth.

This means you don’t have to exert as much energy trying to keep the sheet from running out through the sheave. It makes your job easier. Of course, given enough load, the sheet will slip through the sheave, but not nearly as easily as if the sheave were allowed to simply freewheel.

The most common uses for ratchet blocks are on smaller racing boats, where youre working a spinnaker sheet or mainsheet by hand and wouldnt think of belaying it to a cleat, or even, under the conditions, securing it in a cam cleat. Youre playing wind shifts and gusts with constant adjustment. With a ratchet block, your arm, wrist, and fingers will thank you for the assistance.

As we reported in the May 1, 2005 review of Harkens Carbo Ratchet blocks, there are applications for larger, cruising boats, too. For example, when releasing the control line on a headsail furler, it has a tendency to run out quickly, wrapping loosely around the furler drum, sometimes resulting in overrides that must be cleared before taking the sail in. Letting the control line go through a ratchet block maintains tension on the line, assuring a tighter, more uniform wrap on the drum. Other applications include traveler control lines and genoa lead adjusters.

On any line that youre trimming by hand rather than with a winch, the ratchet block reduces the amount of strength required.

We noted two distinct operating mechanisms among the class.

The first and simplest is an on/off switch on the cheek. Flip the switch on, and the ratchet is engaged. When you want the sheave to freewheel, flip the switch to “off.” We found differences in the ease of operating the switch, which well discuss.

Only one block, Ronstans RF 56101, has both an on/off switch and auto sensing.

It would make testing easier if each of the five manufacturers made blocks in the same sizes, but of course, they don’t. The small blocks range in sheave diameter from 45 millimeters to 70 millimeters, which makes comparative friction testing difficult. Bigger blocks have more surface area in contact, and therefore inherently more friction than smaller blocks.

In any case, we focused on the mid-sizes: 55 millimeter, 57 millimeter, and the slightly large Seldn at 60 millimeter.

The Harken website is one of the best in the business, and its section on ratchet blocks is very good. There, youll read about sizing blocks to the load, the importance of correct line diameter, and how aggressive sheave designs may hold more but also destroy line. Its worth a read before making a purchase.

Sheaves on the two ratchet blocks we tested are anodized aluminum. The ball bearings are “engineered plastic in fitted ball races,” and the cheeks are described as “long-glass reinforced engineered nylon.” Shackles are stainless steel, but the grade is not specified. The swivel can be left to freely rotate or be fixed.

Both Harken blocks-the Carbo Ratchet and Carbo Ratchamatic-ranked lowest in holding power, but Harken says that this is not their ultimate goal. Their blocks meet what they believe is the right trade-off between grip and trimming feel. For more grip, Harken suggests adding a second auto-ratchet block in the series. Harken also says it blocks are designed to minimize wear on a wider range of line types (soft to hard), something we intend to look at more closely.

Holt Allen is a British company that, at least in our perception, over the years has manufactured lower-priced hardware than its competition (Harken, Lewmar, Antal, Ronstan, Seldn). But its Performance line now has many of the features found in the other brands, such as fiber strops in place of shackles and Delrin (Duponts trademark homopolymer acetal plastic) and stainless-steel ball bearings. The block tested has a 316 stainless-steel axle, aluminum sheave, and glass-filled nylon cheeks. Listed at 57 millimeters when we began this evaluation, it now is specified as 60 millimeters in the 2009 catalog. Soft-sided cheeks are said to protect the deck.

Where most blocks are entirely riveted together, the Holt sheave can be removed, in case you bust some ball bearings. Were not sure a repairable block is a big deal, but we have a natural tendency to like taking things apart and putting them back together-however hard the struggle.

The Holts holding power was comparable with the more expensive Seldn and Wichard blocks. In friction, it tied with Harken for third.

An Australian hardware manufacturer, Ronstan is the only one to offer automatic and manual modes in one block. And there are accessories available for the RF56101 we tested: a stand-up base, retainer clip, and replacement Dyneema link.

The sheave is anodized aluminum, and the stage-two bearing is reinforced glass fiber. Cheeks are glass fiber-reinforced nylon, and the fiber strop or head link is UV

In the holding power competition, the Ronstan 55 impressed us with more than twice the weight of the others-an average of 82 pounds. We figure this is due to the sheave design, which incorporates 12 gripping faces, four more than most other sheave designs. One would assume that a blocks ability to handle higher loads would result in more chafe, but Ronstan says its rounded cross-section sheave is kinder to cores and covers than v-shaped sheaves. We will be looking closer at chafe during field trials.

The Ronstan 55 placed second in the friction test.

Seldn is perhaps best known in this country for its mainsail and headsail furling systems. Even on the website, its not immediately obvious that the company also makes a line of blocks. For now, you may have to download the 6MB Deck Hardware catalog to find its ratchet blocks.

We checked out the 45-millimeter and 60-millimeter ratchet blocks, which have Delrin plastic ball bearings, aluminum sheaves, and reinforced nylon (Grivory) cheeks.

The 45-millimeter block is automatic, adjustable by means of a set screw and Allen wrench, while the 60-millimeter model has a small blue manual switch in the center to alternate between ratchet and free-turning modes.

The switch isn’t that easy to turn-especially with gloves-but it wont accidentally trip or catch a line. The 60 held an average of 36 pounds in the holding-power test and rated No. 1 in the friction test.

Wichard is a French manufacturer of quality stainless-steel fittings, like shackles, snap hooks, pad eyes, and even knives. As it has expanded its product lines, a line of blocks has been added, including one ratchet model.

Wichards 55-millimeter ratchet block has Delrin ball bearings and an anodized aluminum sheave. Its oversized swivel and shackle-pin arrangement stood out in the field.

Whereas Harkens, Seldns, and Ronstans on/off switches are tiny, Wichards is a large bar that slides easily back and forth, pushed at either end. The block is quite large, too, weighing roughly twice that of the others. It is robust, and has a high safe working load of nearly 2,000 pounds-three times more than most of the other blocks.

In the holding-power test, the Wichard held 35 pounds, consistent with the Seldn and Holt blocks, but far below that of Ronstan. It ranked last in the friction test. Its also the most expensive of the group.

We found no real flops in this test field in terms of quality, but there was a wide variation when it came to performance. Overall, the Ronstan was the most impressive with its grip, versatility, and lightweight design. Each of the others has its niche: the Harkens slippery sheave for light-load tweaking; the Wichard puts ruggedness first; the Seldn is a true friction fighter; and the serviceable Holt Allen offers good value. We plan to put many of these blocks into hard use and will be reporting on their performance in the future.

If your application requires more beef in the frame, sheave, and bearings, this is a logical choice. We were pleasantly surprised to learn that the 60-millimeters price, through Seldn dealers, is just $56, very close to the discount prices for Harken. That makes this smooth block a good deal. Priced at $55, the RF56101 is our Best Choice for grip among ratchet blocks in this size. Clearly a lot of thought has gone into the design and engineering of this block. It has great grip and is the most versatile of the group.At least in the U.S., other brands are easier to lay your hands on. Its price, however, is by far the lowest of the group tested.

You can’t go wrong buying Harken gear, and its Carbo Ratchamatics have a loyal following. If you prefer easy easing over grip, this is a good option. 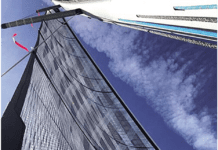 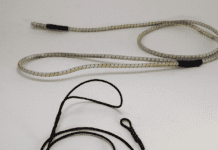