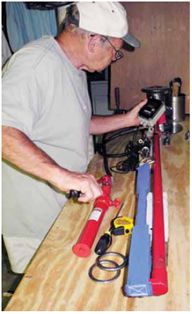 Two years ago, we sewed up our own dodger and assorted deck covers made from Sunbrella and WeatherMax fabrics and monitored how well the materials stood up to 24/7 weather exposure and the extreme climate flip-flops of the mid-Atlantic region.

On a parallel track, we did some controlled—and creative—material testing restricted by tight budget constraints. For example, we lacked an Instron tension test machine to carry out a formal ASTN D5034 elongation and breaking strength test, so we did the next best thing: We made our own.

Using a hydraulic ram and load sensor, we were able to set up a standardized approach to tension testing. The process involved cutting material in both warp and fill-bias strips, sewing them into loops and carefully trimming the mid point into “fuse like” narrower sections. We then placed the test bands between the bills of the hydraulic ram and recorded the elongation and breaking strength of new and older materials. (See “Breaking Strength” column in the accompanying Value Guide.) Test bands were made from just off the roll fabric, material exposed to the elements for two years, and a few samples that had been attacked by the elements for over a decade.

The chemistry behind yarn finishes and the coatings used on a breathable fabric play a key role in making it impermeable to water. We devised a tilting frame that incrementally angled each piece of fabric tested. Measured beads of water were placed on the surface, and the frame was slowly inclined. When the beads of water began to roll, the angle of the frame to the horizontal was recorded. (See “Shed Water” column in the Value Guide, which gives the angle at which the water began to be shed.)

Our second water test was a controlled examination of pressure permeability, and we used a 20-inch water column to exert pressure on a single layer of material. A patch of test material was glued to the bottom of a vertical water column, and at several fixed time intervals, a catchment basin was checked for water accumulation. The underside of the material was also scrutinized for signs of droplet formation. Time and leaked water volume were measured; the results indicated a direct correlation between an increase in exposure to the elements and the permeability of the fabric. (See “Pressure Permeability” column in the Value Guide.)

Finally, we subjected the material samples to a mobile “wind-tunnel” test, driving from Annapolis, Md., to Florida with the fabrics flapping, fluttering, and flogging away while atop a car for the multi-day trip.

Over a two-year period, the average strength deterioration of the materials on the test boat was 12 percent. However, what was highly detrimental to the fabric was chafe, which can result from something as innocuous as the fabric rubbing against smooth stainless-steel tubing. Such smooth surface abrasion led to enough filament damage to drop the tensile strength by as much as 50 percent in some cases. In order to replicate such wind-driven abrasion damage, we set up a frame with smooth 1.25-inch diameter tube section crosspieces. A sample-fabric “sock” was sewn up that could be slipped over the frame and placed on an automobile roof rack. We were able to compare time spent at highway speed with the chafe induced, and get a rough feel for the effect of smooth surface abrasion and flogging.