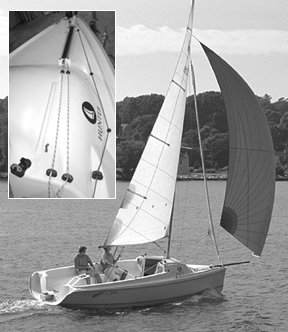 Recently PS tested an OEM product that increased the light-air performance on one of our test platforms—a trailerable San Juan 23—and eased sailhandling in the process.

Prior to this modification, we’d used a traditional spinnaker on downwind runs, replete with a conventional pole, sheets, guys, and extra blocks. However, in searching for a performance-enhancing alternative, we discovered that the bowsprit arrangement for the Hunter 216 (see boat review, PS July 1, ’04) was available for purchase on its own.

The ‘sprit kit sold by Hunter Marine consists of a 62″-long carbon-fiber pole, a fiberglass tube that houses the pole, 1″ blocks of high-density polyethelyene (Starboard ™ material) that secure the tube to the deck, and a similar block against which the back end of the pole rests when it is retracted. Pole controls are two lines led aft to cam cleats with tails long enough to make operating the pole from the cockpit a simple matter (see inset photo). Thankfully, all of the hardware necessary for installation is provided, so there were no unnecessary trips to the chandlery. Also included were a paper template and photos that precisely show the intended location of the parts.

Installation was a simple matter of locating the pole and blocks and drilling holes through the deck, though tightening the fasteners is a two-person job on a boat with an enclosed interior. The only tools necessary were a drill and 1/8″, 3/16″ & 5/16″ drill bits, hammer, razor knife, Phillips screwdriver, some sealant (we used 5200), and a socket wrench with a 1/2″ socket.

Included in Hunter’s kit is a spinnaker, and running rigging for a 21-footer, priced at $1,599. Without the spinnaker, it’s $1,299. We think that’s a little high given that the boat itself costs $14,000, but we’ll acknowledge that improved performance most often comes at a cost.

After spending about three hours mounting the pole, we tested it and the kite on a light-air day on the Sea of Cortez. Sailing under mainsail and genoa, we struggled to achieve three knots of boat speed, and felt uncomfortable riding over swells 15 to 20 feet apart, so we launched the new chute. Except for attaching the sail to the tack line on the pole and launching the pole, the operation is no different than hoisting a headsail.

The results were gratifying. Our boat speed immediately increased to five knots, steering improved, and the ride was much more comfortable. The spinnaker is effective through approximately 75 to 140 degrees of apparent wind. Trimming the sail is no different than trimming a headsail; the sheets lead aft to a block on the toerail and then forward to the winch.

The Bottom Line: This bow pole is suitable for boats in the 19 to 24-foot range , but may not fit all deck configurations. Yes, it’s pricey, but we’re now able to sail faster with more comfort and less effort.