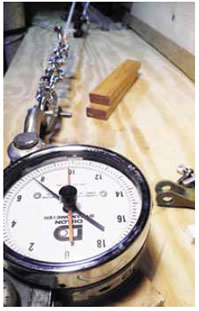 For this evaluation, each shackle was visually inspected, component parts were measured, and stainless-steel alloys were noted. During this initial inspection, we tested how easy each snap shackle could be closed with one hand; we also repeatedly measured how easily the un-clipping process could be executed using a simple tension spring-test on the piston-pin versions and by using a height scale on the Tylaska push-to-release latching model. We recognize the importance of pin security under load and felt that the reluctance of a shackle pin to be easily pulled under load was, in many cases, an attribute.

During our tensile-load testing portion of the evaluation, we were able to vary line tension from 100 to 1,000 pounds. We measured load levels by placing a strain gauge at the distal end of our test jig and tensioned it with a high-modulus line led to our trusty old Ideal electric windlass. In our initial scrutiny, we measured how much tension it took to open the unloaded snap shackles. The next step involved placing each shackle in tension and varying loads from 100 to 400 pounds. The goal was to identify the highest line tension load at which the snap shackle would release with a 30-pound pull. Sampling was repeated five times, and the mean was recorded in our findings.

A hard-to-release snap shackle is both good news and bad news, it all depends on how the hardware will be used. In the case of a halyard under load, the reluctance of a snap shackle to open is a good thing. However, for racers engaged in a spinnaker douse or a complex peel-in which a heavy-air spinnaker is about to replace a lighter-weight chute-a reluctant snap shackle is the bowmans enemy.

To add further complication to nailing down good and bad snap-shackle attributes, theres another case where a sailor needs a snap shackle to be both easy to release and reluctant to let go. This is when the snap shackle is used to attach a tether to a PFD/harness. In such usage, theres a need for a secure attachment as well as an ability to release under load-when and if a person is trapped by the tether. We added a tether snap shackle test to our evaluation to see how the hardware could be designed to handle midrange loads and still be quick to release under lower three-digit loads.

We followed the test with a tension evaluation that cycled loads 10 times per minute in a range that varied from 0 to 900 pounds. The purpose of the cycling strain test was to measure the potential for pin creep, a problem that can lead to unwanted shackle opening. The pins in two of the older snap shackles we used to set up this test demonstrated a tendency to creep. Prior to testing, both showed signs of excess play at the hinge joint, some dimensional change to the piston pin, and deformity of the hole in the hinged arm of the shackle. During the load-cycling, the piston pins started to incrementally move under pressure, literally nudging their way toward an unwanted opening. None of the new products showed any sign of this tendency.

Finally, we tested the swivel under load ability. Using the tension jig to add an in-line pull to each snap shackle, we set up a short lever and spring gauge arrangement that allowed us to test the swiveling action under varying load conditions. Once again, we induced tension using a high-modulus line led to the warping drum of the Ideal windless. As might be expected, each increase in tension led to a measurable increase in resistance to swivel function. The measurement increments began at 100 pounds with stops at 200, 400, and 800 pounds.