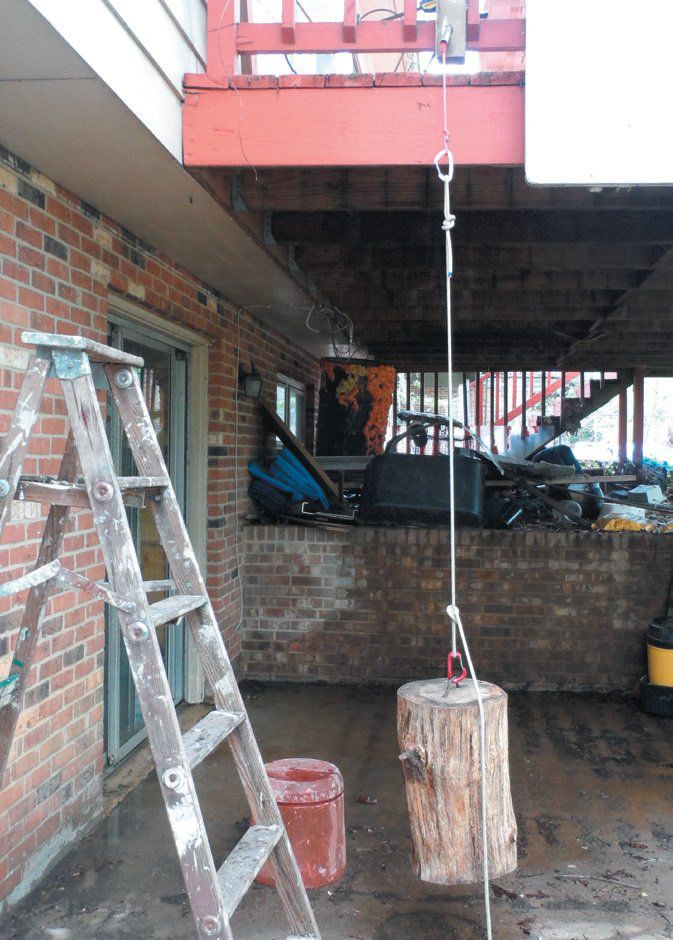 As outlined in our previous report on lifelines, high modulus polyethylene (HMPE) fiber rope has revolutionized sailboat rigging during the past decade (see Fiber lifeline Protection Plan, PS September 2015 online), however sailors arent the only ones benefitting from the introduction of this super-strong, low-stretch cordage. Virtually any application that once employed a stranded wire-rope-ranging from tow cables to hoists-is now also served by HMPE. The widespread availability of generic brands of this super-strong, low-stretch cordage made us curious. How do these non-marine brand products compare to known marine brands? And what types are best suited for the various sailboat applications?

Dyneema, a popular brand of multi-strand HMPE rope made by the Dutch multinational DSM, is offered in a range of fiber types and weaves-from SK 99 down to SK 25, with the smaller number indicating lower density, lower strength fibers. DSM has factories in the U.S. as well as China, where a line of generic HMPE ropes-identified only by tensile strength (bearing neither the Dyneema name or SK number)-are made. Other name-brand HMPE products include Spectra by Honeywell, and Acera by Timm/Willhelmsen.

In any assembled rope, stretch comes in two forms: construction stretch, when knots, splices, and the braids tightens under load; and fiber stretch, when the rope fibers elongate. During heat setting, the fibers are stretched and heated in a carefully regulated process, which effectively accelerates the construction stretch that normally occurs under load. New England Ropes STS (stronger than steel) is a heat-set Dyneema.

In the lab, testers compared strength by pulling to failure a short length of each rope sample with eye splices at each end. Abrasion resistance was tested using a 75-pound weight swinging like a pendulum and dragging the unprotected rope across a cinder block about 20 times per minute for 10 minutes (see photo).

Our breaking strength data was supplemented with observation from various Dyneema products used aboard our test sailboats.

There is also an ongoing lifeline test. In 2012, we fitted a PS test boat with New England Ropes STS Dyneema lifelines for a long-term test. At present, the lifelines are showing no significant wear, nor do they reveal any indication that they’ve lost any significant strength. We plan to load test them in the future.

Shortly after the test began, after a few racing failures, World Sailing (then ISAF) restricted the use of Dyneema lifelines to inshore racing (Categories 4 and 5). Their concern was the lack of field data. Eventually, the risk factors were identified. Most commonly, stanchions that previously held bare wire cable had developed burrs at the edges.

In 2015 World Sailing once again allowed HMPE lifelines, though only for multihulls and near-shore racing (Categories 4 and 5). To combat chafe, World Sailing increased the specified diameters for smaller lines. Data collected so far suggests these lifelines will remain as strong as steel through a five- to eight-year lifespan, depending on use. The World Sailing specifications for sailing boat lifelines are available online at https://www.sailing.org/specialregs

Although World Sailing permits smaller diameter lines, we recommend a minimum of -inch Dyneema for the top lifeline. This guarantees a longer service life for just a few dollars more. The most important installation step-other than following splicing instructions-is to very carefully prepare the stanchion holes, removing all burrs and polishing with 1200 grit sandpaper. Chafe guards can also be inserted, made from 2-inch lengths of plastic tubing or nylon tubular webbing (see Fiber Protection Plan, PS September 2015).

New England Ropes STS (heat set Dyneema) is quite firm. It reminded us of the Amsteel cables used in our pull testing rig, which have seen hard use. New England Ropes HTS 78 and Endura 12 (conventional Dyneema) are a very supple line with the same braid as STS. Safeway Lines Tow Cable (generic Dyneema, aka HMPE) has a considerably looser weave and is slightly more prone to snagging. By the time of publication, we could no longer find this brand, although nearly identical products are offered under other brand names. All of the tested ropes spliced very easily.

Strength. Heat-set Dyneema has a slight advantage over normal Dyneema in initial strength, the result of the fibers and the molecules within them being better aligned. However, data from ropes suggest that this process also happens naturally under high load, and were inclined to believe that. We’ve see the changes that occur in highly loaded rigging and in cables that have been repeatedly loaded to high fractions of breaking strength on test stands; the rope becomes firm, like heat set, and stretch is reduced.

All of the products, including the generic HMPE tow cable, met the manufacturer specifications. The tow cable was the equivalent to SK 65 fiber.

Fatigue. The argument against heat setting is that it is just a carefully controlled, accelerated aging process. The rope is made stronger and less stretchy, but lifespan is curtailed. Manufacturers of heat-set rope emphasize that heat-set ropes are stronger and thus have an inherently longer fatigue life. We’ve found no third party data comparing heat set vs. conventional HMPE fatigue life.

As a practical matter, it probably doesn’t make much difference. Correctly sized ropes will fail from chafe or UV damage long before fatigue becomes an issue. Colligo performed a 10-year study of Dynice Dux (heat-set Dyneema) that showed a straight-line decay from full strength to half strength in eight years. Obviously, usage and climate has an effect, so the recommendation for cruisers in the tropics is for replacement in five to seven years-fine considering the overspecified sizes for Dux. However, at the rate that Dyneema loses strength, the only thing keeping up the mast at 15 years will be wishful thinking. If you have Dyneema standing rigging, respect the replacement schedule.

Abrasion. Several riggers told us heat set Dyneema was less abrasion resistant than conventional Dyneema when used with a turning block, tackle, or adjustable backstay. However, during the pendulum torture test, none of the samples showed any appreciable damage after being tested for an hour across wood. Not a fiber was out of place, implying that even cheap Dyneema has a very long service life if properly installed. Polyester double braid showed 10-20 percent chafe damage under the same conditions.

The cinder block, on the other hand, was highly damaging to all of the samples. In all cases, some of the strands were chafed more than 50 percent through, but no strand chafed completely through. The accompanying photos reflecting chafe can be misleading because the weave of the heat set Dyneema remains tight, while the looser weave of the generic cable show damage more readily.

However, when corrected for differences in fiber strength, there was relatively little difference in abrasion or strength loss between the heat-set Dyneema and the cheap tow cable. The tow cable was abraded a bit more, but it was SK 65 fiber versus SK 78. The looser weave may also have contributed to the additional chafe.

The other interesting result was the performance of polyester double braid. In previous research (Abrasion and Break Testing, PS March 2015), Dyneema was much more durable in linear, push-pull testing than polyester, but in side-to-side testing over rough surfaces, the tightness of the braid is more important than the material. This is why polyester mooring bridles, such as Yales well-respected Maximoor, often outperform Dyneema pendants.

We like that HMPE is compact, strong, and low stretch, but it needs protection when dragged sideways across aggressive surfaces.

The best product depends on the job to be done. For standing rigging and other applications where minimal stretch and maximum strength are required, heat-set Dyneema from a reputable rope manufacture is the top choice. However, where flexibility and abrasion resistance are important-split backstays, lifelines, and low friction ring tackles, for example-conventional Dyneema will run much more smoothly.

Is there a difference in fatigue life? Were not sure. The heat set Dyneema does not like flexing around a pulley and the minimum recommended bend radius is greater.

The only clear advantage of heat set Dyneema is that when used for standing rigging, there is less construction stretch, making installation and rig tuning quicker and more predictable. In our experience, after a few months of hard use, regular Dyneema does seem to behave like heat set rope.

What about non-critical and low strain applications? The HMPE tow cable packs a lot of strength in a small space and offers a strength/dollar ratio that no other fiber can touch. On smaller boats Dyneema is nearly always over specified because the smaller sizes are just too difficult to handle. Dyneema is commonly used in low friction ring systems not because it is amazingly strong, but because it glides around turns so well.

We’ve also found many applications related to anchoring and mooring loops and pendants, where generic Dyneema delivers incredible strength in minimal space, and incredible durability if covered with a chafe guard. However, the difficulty in identifying the manufacturing source of some brands and confirm quality control keeps us skeptical. Although our field experience with generic HMPE rope has been very good to date, cost savings would be quickly erased by a failure in some critical application.

During the chafe testing, wear ranged from 20 to 50 percent of the original diameter, and breaking strength testing after chafe testing was generally proportional to the amount of damage.

None of the twisted strands comprising the woven rope chafed through completely. In the adjacent images, the weave was separated for closer inspection.