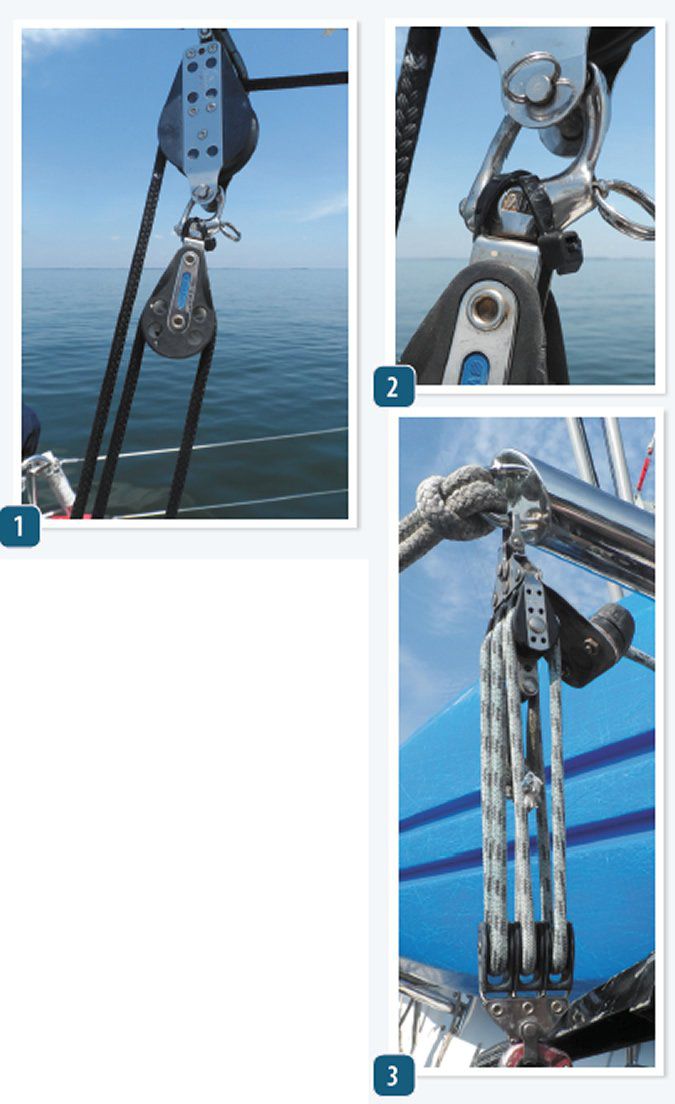 What kind of line do you use in your davit tackle? My lines keep twisting, chafing, and jamming. The ropes run crooked in the blocks no matter how often I restring them, asks Sailor One.

Simple. You need a swivel on each of the blocks to let the twist work its way out, fires Sailor Two.

No, that’s not it at all, interjects Sailor Three. You need to replace that cheap line with some of this top dollar Dyneema line. It never twists like that, and its slippery, so there’s less friction.

All of this sounds logical. Only the swivel advice is dead wrong, and the line doesn’t need to be replaced. They both miss the primary underlying cause completely. While its true that every rope likes a good tangle-its something deep in their DNA-there is no reason for a tackle to twist if the forces are properly balanced. If the tackle is inclined to twist, the last thing you want to do is enable such misbehavior with a swivel. Instead, use fixed blocks throughout, correcting any major misalignment with an extra shackle. Force any line twist to come out of the last block when the tackle is block-to-block.

Fiddle Blocks. These are always rigged in one plane, using a simple outward spiral pattern. None of the internal blocks should swivel; a swivel there solves nothing and leads to friction. A swivel at one end may be useful, but more often fixed blocks are better.

Double and Triple Blocks. If these are rigged for 4:1 purchase or 6:1 purchase, the problem is nearly always square rigging. An imbalance in forces due to bearing friction, line friction, and sometimes an offset pull on the final exit twists the blocks, cause the ropes to rub and the lines to run crooked in their pulleys. The solution is cross-reeving. Instead of following common sense, winding the lines from right to left in square pattern, lay the blocks at 90 degrees. (See photo #3)

Even if the ropes do rub on occasion, it is more likely they are traveling the same direction, so wear and friction is reduced. If a swivel is required because of the inherent extreme rotation (multi-purchase dinghy lifting tackle loves to get twisted) you can now add a swivel and it should remain well behaved.

Even non-locking blocks can be secured either permanently or for test purposes by lashing crisscrossed with anything from cable ties or rigging wire; very little force is actually involved. Take a close look at the swivel and call the factory if all else fails, before buying new blocks.

Other causes. Double braid lines often have a slight construction imbalance, either between the core and the cover or between right and left hand weave. Normally this will settle down after a few dozen hard loading cycles, but it may take as much as a full season. Some lines are worse; Sta-Set Xtra is notorious, due to the core wrap that gives it reduced stretch.

Most single braids and climbing ropes are immune to twisting. Even three-strand rope will settle down given time, although it may require occasionally re-reeving the tackle during the break-in period. Again, with certain applications you may need a swivel to make it run smooth, though never to eliminate twist. However, before running out and buying a new block, try inserting a shackle or a short rope pendant.

Length. The stiffness of the splice may limit the ability of the tackle to go block-to-block.

Friction. A knot can rub on the lines, increasing friction (generally very minor). Often reversing the knot or using a different knot will solve the problem. Tighten securely and keep the tails reasonably short.