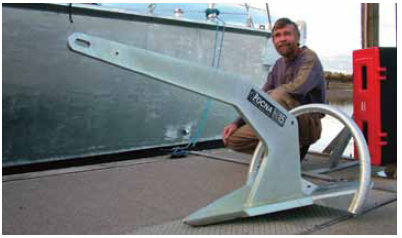 In the wake of questions about the tensile strength of steel used in the shafts of Rocna anchors, West Marine has issued “product specification notices” to customers who have purchased Rocna anchors since 2010 and recently posted the notice on its website (www.westmarine.com). West Marine is one of world’s largest distributors of the Rocna, a plow-style anchor sold in 34 different countries. The Rocna (www.rocna.com) earned a Recommended rating in our 2008 tests of heavyweight anchors, finishing behind the Manson Ray and the Manson Supreme (November 2008).

The West Marine notification states that certain Rocna anchors were made with a “weaker grade of steel compared to that published on the Rocna website” and directs customers to Rocna for information regarding the materials and construction of the Rocna anchor. Under its “No Hassles Guarantee,” West Marine offers a full refund to owners who are not satisfied with their purchase.

West Marine’s offer comes after several months of heated online debate over the strength of the shafts of Rocna anchors made in China. Rocna CEO Steve Bambury told Practical Sailor that based on recent tests, Rocna could find no cause for a recall. “The [anchor] chain is going to fall apart long before the anchor ever does,” he said.

According to Bambury, Rocna recently learned that a “small portion” of anchors manufactured in China during the first quarter of 2010 were made “using a shank steel with a reduced specification.”

Until recently, Rocna’s promotional literature on its website touted a specific high-tensile, liquid-quenched plate steel with ultimate tensile strength of 800 megapascals (MPa). One megapascal equals about 145 pounds per square inch.

Bambury told PS that when the company discovered that the website information was “out of date,” it was corrected. He said that Rocna’s anchors are “designed and built to exceed the requirements of super high holding power (SHHP) according to the Royal Institute of Naval Architects (RINA) and Lloyds [of London]” and that “the specifics of the metallurgy are largely irrelevant.” Bambury said that the company did not “actually promote the Rocna on the basis of steel specifications,” focusing instead on the functional holding power and strength as defined by SHHP standards.

In our experience, a shank’s tensile strength was an important selling point for Rocna, and RINA standards are not the last word on shaft strength. When the shank of an anchor bends, it changes the anchor geometry, and its effective holding power can be significantly reduced. Tensile strength is particularly important in plate steel shanks, because of their vulnerability to bending under side loads.

Bambury said that the online “anti-Rocna” campaign can be misleading. He pointed out that the company has had only eight Rocna anchors returned with bent shanks over the lifetime of the business. Rocna anchors carry a lifetime warranty against defects.

Former Rocna production manager Grant King told PS that he worked as an independent contractor from May 2009 to June 2010, overseeing Rocna’s China production.

According to King, the lower-grade shafts began appearing when production was shifted from New Zealand and Canada to China in 2008 and the metal spec was lowered “to a metal called Q420, which, at best, was a 400 megapascal steel, not quenched and tempered, but merely a mild steel with a chromium additive to make it harder … far below the 800 MPa specified” in the original New Zealand-built anchor.

King said he approved a higher-grade steel, Q620, for successive Rocnas, although this steel also was below the 800 MPa spec. He said Rocna continued to produce Q420 anchors until May 2010. He estimates that at least 4,000 anchors made between December 2008 and June 2010 were far below the 800 MPa ultimate tensile strength that Rocna claimed on its website. Rocna disputes that claim.

High-tensile steel has a high-carbon content and is heat treated for added strength. The standards for high-tensile designation can vary according to application. In a sample of plain carbon steel in the “Machinery’s Handbook” by Erik Oberg, Franklin D. Jones, et. al., the ultimate tensile strength is 668 MPa or about 97,000 psi.

King believes that even the current SHHP certification is misleading because it is based on the original Rocna—not those anchors made with the weaker steel. He also contends Rocna’s China factories do not meet RINA’s requirements.

Rocna’s current RINA certificate shows seabed testing took place in Auckland, New Zealand, in 2008, prior to the company’s move to China, and it shows mechanical testing took place January 2011 in Shanghai. Bambury explained that “while the manufacture process involves multiple facilities, the process for manufacturing Rocna anchors begins and ends in the ISO-certified facility listed on our RINA certificate.”

Bambury is confident that all of Rocna’s anchors surpass RINA standards for Super High Holding Power. He cites a recent test that used computer modeling to estimate the strength of the anchors made with the alternate material. “Due to the unavailability of any of the limited number of anchors produced with the alternate material, we engaged a highly reputable marine engineering consulting company to calculate the maximum load capability of these anchors,” Bambury said by email. “The model then calculated a load capability for the alternate specification anchors of 471 percent of the RINA SHHP proof load requirements. All Rocna anchors, including those produced with alternate material, exceed RINA’s proof load requirements by a significant margin.”

PS has reported on quality control problems in marine-grade metals in past issues, including PS Technical Editor Ralph Naranjo’s special report, “Marine Metal Warning,” which ran in February 2007. If you believe you have a Rocna made of the “alternate metal” and would like to have it tested, contact PS at practicalsailor@belvoirpubs.com.