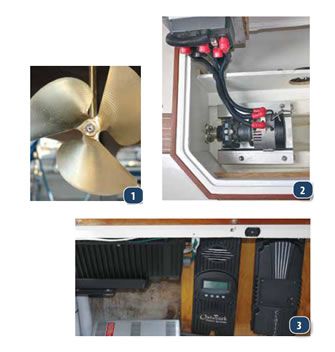 When we last touched on electric propulsion conversion in September 2008, PS noticed several small companies catering to the niche. Among them was Above the Waterline Marine in Santa Barbara, Calif. (www.abovethewaterline.net). Owned by James Lambden, the company specializes in alternative energy systems; it also builds and markets an electric propulsion system, made by subsidiary Propulsion Marine.

Currently, Above the Waterline is testing software and hardware to better manage and monitor power aboard its test boat, the Catalina 30 Kapowai. According to Lambden, the actual test data yielded the following performance results: at 4 knots, it drew 29.7 amps (at operating voltage of 48 volts); at 5 knots, it drew 64.2 amps. Range at 5 knots, using four Lifeline 8D AGM and four Lifeline 4D AGM batteries (total capacity, in kilowatt hours = 22.6 kWh) and discharging them to 80 percent was about 29 miles. The photos at right show details of the system currently being tested. (More details are on the Propulsion Marine website, www.propulsionmarine.com.)

1. The propeller is an ACME 12.5 x 14-inch propeller. A typical diesel engine for this boat would overload with a propeller of these dimensions. According to Lambden, it takes only 50 watts to keep the blade turning and reduce the additional drag—called zero-thrust feathering.

2. The air-cooled Propulsion Marine 5.5-kilowatt motor uses a compact Browning gearbox. The gear ratio is custom-matched with a propeller to match the boat and how it is to be used. Temperature-controlled fans cool the engine space.

3. The chargers are located behind the port settee. The Outback Inverter-charger is held up by the large aluminum backing plate (black box on left). The Outback Solar Charge controller (middle) is next to the Midnite Sun Classic (right), configured as a DC-to-DC converter, to provide the house with up to 80 amps of pure 12-volt DC from the 48-volt DC bank.

Lambden recommends AGM batteries for most clients. For those equipped with a diesel generator, or high-output charger, he recommends Odyssey PC 1800 Thin Plate Pure Lead (TPPL) batteries, which have a higher acceptance rate than AGMs. He only suggests lithium ion for race boats or multihulls, since weight is at a premium for those boats.

Some intrepid customers such as Eric Dysart are putting lithium-ion batteries on more conventional sailboats. Dysart has lithium-ion-phosphate batteries on his electric Propulsion Cheoy Lee 30. The batteries are 160-amp hour cells from Thundersky, a maker in China. Dysart says with his 8kWh bank, he counts on a range of about 20 miles at 4 knots. Here’s what else he had to say about his experience with lithium ion:

“The obvious advantages [of lithiums] are the size and weight factors. Lithiums have lower internal resistance than AGM and perform about twice as well as AGM compared to flooded batteries. They also support even higher discharge and charging rates. Thundersky says that my cells can support constant charging and discharge rates of 3C (3 x capacity), or 480 amps for my 160-amp hour cells (capacity = 8 kWh). They say that an impulse discharge of 20C (3,200 amps) won’t kill them, but that looks like marketing showmanship to me.

“Given that [level of] performance, you can see why companies like Mastervolt and Torqeedo feel that they can charge such a premium for lithium technology. Those offerings have the advantage of familiar formats and connections. They also have internal [battery management systems] that protect the cells. From the consumer’s perspective, they are just high-performance batteries that cost considerable money. DIY installations like mine can save real money, but I’ve had to take more responsibility for selecting and maintaining the components.

“All of that said, this is fairly new technology, and for most boat owners, I would still recommend AGM as a proven and resilient storage technology. They represent many of the same performance advantages as lithium over flooded batteries, albeit to a somewhat lesser extent.

“I know that looking just at promotional materials, Lithium batteries look like the answer to all of our electrical problems, but in practice, they are either very expensive or still a little gadgety. I don’t mind being on the leading edge of electric conversions, but for regular boaters, the value proposition might not be there . . . yet.”