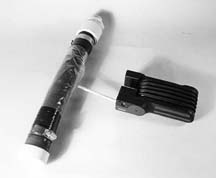 As any boat owner knows, foul odors emanating from the head are offensive, difficult to cure…and, unfortunately, common. In some families, it’s sufficiently objectionable to make a family member refuse going below or aboard altogether. Here at PS, we’ve given a fair amount of attention to the problem and tendered advice on numerous occasions.

This current report stems from a September 1993 article in which we covered SeaLand’s investigation into the causes of hose failure. At that time, SeaLand did not market its own brand of hose, but consumer complaints about head odors launched them into a major R&D effort.

History of Sanitation Hose
As reported in the 1993 article, the first hoses commonly used to connect toilets to holding tanks and seacocks were fabric- and wire-reinforced rubber. This was followed by polyethylene accordion hose, which had the nasty tendency to split. The corrugations also trapped sewage, which accelerated failure.

According to SeaLand Technology president, Ed McKiernan, another firm, Monogram Sanitation, next pursued a Greek patent for PVC-encapsulated hose with a PVC helix molded in. Improvements were made by making it with a smoother interior wall. This, in conjunction with the development of barbless couplings, produced the basic white 1-1/2″ PVC sanitation hose systems used today.

Complaints about hose failure persisted, however, prompting SeaLand to launch a lengthy and expensive research project aimed at identifying the elements in raw human waste that cause hose failure (permeate the wall). It then developed and patented a test whereby different hoses can be tested to determine their degree of permeability when exposed to the noxious element—“Testing of Hoses,” patent number 5,442,952. One of several chemicals is placed inside the hose, either carbon disulfide, dimethyl sulfide and/or dimethyl disulfide. The open ends of the 12″ hose samples are then sealed and the entire hose covered with a flexible nylon film that is impervious to gases. The hose with chemical inside is allowed to stand for 24 hours. Then a small slit is made in the nylon covering and the atmosphere sampled with a Dräger detection tube and any gas obtained measured by its parts per million (ppm).

A measurement of 40 ppm indicates a clear failure.

Any gas outside the hose but inside the covering is presumed to have passed through the hose wall. The covering slit is then resealed, and the hose with chemical inside allowed to sit another 24 hours before a second sample is taken and measured. And so on until the hose fails.

In 1996, we decided to test OdorSafe hose against leading competitive brands from Shields Rubber Corp., Trident Marine Products and Lawrence Industries. In the absence of any better ideas, we used SeaLand’s patented test.

Seven hose samples plus one of rigid PVC were cleaned of any markings and shipped to an independent laboratory—Terralab Engineers International in Salt Lake City, Utah. We elected not to accelerate failure rates—a test option—by pretreating the hoses with methyl alcohol because it seemed like an unnecessary variable. As it turned out, we needn’t have worried about the test running a long time. Also, samples were taken every 3 hours during the first 24, after which sampling was done every 24 hours.

Test Results
The first three hoses to fail were the black rubber samples, one each from Lawrence, Trident and Shields. Two failed after just 6 hours and the third after 9 hours.

The white PVC hose from the same three companies failed at 18, 21 and 48 hours. The SeaLand OdorSafe hose failed after 11 days and the test was terminated. The rigid PVC pipe, as expected, did not fail.

The table above shows the results (Click here to view hose test results).

Follow-up
A copy of Terralab’s test was given to each manufacturer and their comments solicited. Members of management from Trident, Lawrence and Shields were unanimous in their surprise at the test results, namely that their black rubber hoses failed before their white PVC hoses. This, they said, ran counter to their long experience in the field and cast serious doubts on the validity of the SeaLand test. As one told us, “When we have a problem with white PVC on a boat, we send them black rubber—end of problem.” Asked why black rubber isn’t promoted over white PVC for marine head use, the answer was its much higher cost—about $4.50-$7.50 per foot vs. about $2.50 per foot.

To investigate, we checked out possible reasons why this test might have produced misleading results with black rubber hoses. Could the sulfur used in vulcanizing the rubber have given a false reading? Again using a Dräger detection tube, we repeated the test in our own facilities, this time with water in the tube instead of carbon disulfide. There was no indication of sulfur (that might have been left in the hose from the vulcanization process) from the detection tube, even after a week. We next tested with a solvent that contained no sulfur compounds. Again, there was no sign of failure.

We hypothesized that carbon disulfide, being a strong solvent for rubber, might have come into contact with the hose’s inner wall and weakened the hose enough to permit vapor permeation. To check this out, we repeated the test with the odorant in an open glass tube so that the liquid didn’t contact the rubber. The hose still failed, just as quickly as in the Terralab test As best we can tell, the SeaLand test method appears to be valid.

Conclusion
Based on tests conducted by both Terralab and ourselves, it is easy to recommend SeaLand OdorSafe sanitation hose as the best flexible hose for eliminating the pass-through of odors in marine head installations. None of the other sanitation hoses come close. At $8.77 per foot, it’s pricey, but, in our opinion, worth the added cost.