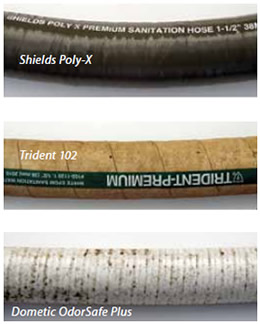 When we wrapped up the testing of the miniature holding tanks after 30 months, we were tempted to just pitch the whole lot in the dumpster after draining their contents, but we thought taking the faux holding tanks apart and examining the components up close might yield some interesting findings. (The things we do in the name of product testing-yuck!) Heres a breakdown of testers observations.

Disassembling the test holding tanks allowed testers to gauge how easily the sanitation hoses could be removed from the barbed fittings. Not surprisingly, the result varied depending on hose stiffness.

The Trident clear vinyl hose was easy to remove. The Raritan Sani/Flex Odor Shield required a little nudging with a screwdriver, while the Trident 101/102 and Shields Poly-X hoses required more vigor but came off within a minute or two. These hoses were not damaged in the process and could have been reattached without leaks. The white Shields 148 and SeaLand OdorSafe Plus hoses, however, could not be removed without damage and would require either a razor knife, hack saw, or heat to get off.

No hose showed any internal evidence of deterioration (blistering, checking, severe staining). None of the nylon or Marlon through-hull fittings showed any damage, and none were significantly weakened-testers intentionally broke a few during our experiment.

To seal the plumbing fittings on the tanks, we tested 3M Marine Silicone, 3M 5200, and butyl rubber tape. None leaked, but the silicone showed some evidence of peeling and blistering, and the 3M 5200 blistered in a few places. The butyl rubber looked the same as the day we assembled the test rigs, tightly adhering to all surfaces and stretching as they parted. This wasnt surprising, given that neither silicone nor urethane are rated for hydrogen sulfide and urine/uric acid, but butyl is.

There are major differences in how easy the hoses are to clean. Some wipe off as easily as a kitchen countertop, while others require heavy scrubbing and bleach to attain even so-so results. With a brush and Spray Nine multi-purpose cleaner, we were able to sufficiently clean the white PVC products and the Raritan Sani/Flex. The Trident 101/102 did not come clean.

Remarkably, the Shields Poly-X hose was wiped clean of accumulated dirt and mildew with only a damp cloth. (Since our test setting was a shaded, leaf-covered backyard through two humid summers, the mildew conditions were severe.)