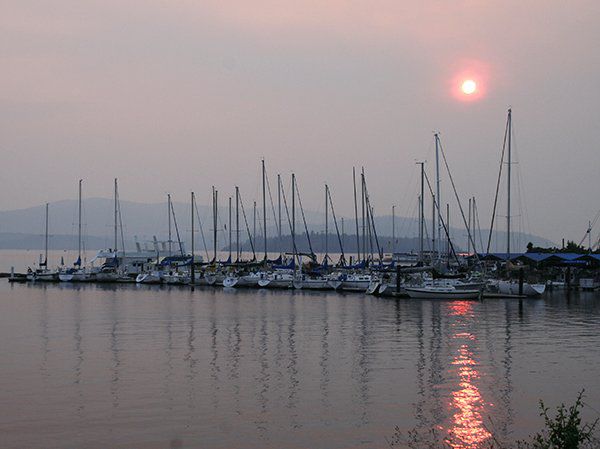 I find myself on the banks of beautiful Lake Pend Oreille in Idaho this week with the family and am reminded that a large number of Practical Sailor readers are freshwater sailors. Although we have often tested freshwater paints in saltwater, our testing in freshwater has been rather limited. Im reposting here a redacted report of our last freshwater test in Lake Erie in 2007. Not much has changed since then.

Temperature and salinity can affect antifouling paint performance, but in our own experience, most modern concoctions are meant to work in a variety of conditions. Those coatings that repel bottom-clingers in the briny waters of Sarasota Bay (our test site) are usually potent enough to deter any freshwater life-form that might try to latch on.

Saltwater species exist in one of the harshest, most competitive environments on the planet, and so a great variety of tenacious, fast-reproducing species have evolved. The marine barnacle, the hermaphroditic master-fouler that greatly inspired Charles Darwins larger pursuit, is marvelously well-adapted to thrive in salt water, capable of colonizing an unprotected barge bottom in a single season.

Freshwater fouling organisms are no weaklings. One of the most notorious, the zebra mussel, introduced by the ballast water of voyaging ships, can wreak havoc with power-plant cooling systems. For sweetwater sailors who have but the summer to sail, the most common threat to the hull is algae. In fact, algae (aka slime) actually tends to grow much faster in fresh water than it does in salt water. Nutrient loading fertilizer runoff is a common source in lakes like Lanier in Georgia, Okeechobee in Florida, or Texoma in Texas and Oklahoma, coupled with summer sun, create ideal conditions for algae blooms.

Fortunately, fighting slime alone doesn’t require a lot of copper, a key biocide in most antifouling paints. One of the best-selling bottom paints in the Midwest, Interlux VC17, has just 17 percent copper. A standout in this test, Pettits SR-21 has 21 percent copper. In fact, some boaters in Lake Erie, where we dropped our paint panels for the freshwater test, said they do just fine with an annual “moustache,” a 4-foot-wide stripe painted below the waterline (where slime growth is thickest) and finish the entire hull with a multi-season hard paint every two to three years. Sea Hawk also makes its own brand of freshwater paint SeaHawk Silver Bullet. West Marine used to sell a freshwater paint (repackaged from Pettit) called FW 21.

These thin-film low-copper paints dry fast and create a slick, hard surface. A small amount goes a long way. The only trouble is that if you do decide to change paints to a conventional anti-fouling paint – something youll want to do if you move to a saltawater location – you will have to remove all the paint. Despite this drawback, opting for a less-potent concoction in fresh water is more than just economical, it makes environmental sense. Smaller lakes, in particular, are more fragile ecosystems than well-flushed saltwater basins.

In our testing, paints that generally did well in salt water also did well in fresh water. However, some low-copper paints that did poorly in the saltwater test did very well in fresh water. The cleanest paints were potent hard paints Pettit Super Premium, a copper-loaded paint that had only a few smidgens of slime still clinging to it after being sluiced. Interlux Ultra was equally clean, but it is more expensive.

Although our panels were immersed for just 18 weeks, algae attached quickly and mussels grew on most of the unprotected areas. Our table from 2007 reflects the performance of hard paints after four months. The hard paints are generally better suited to burnishing, trailering, and beaching. They also will hold up to scrubbing better, but we don’t encourage scrubbing in small lakes. One downside for most of these hard paints is that you will have to re-activate them with a light sanding before relaunching.

For racers, Pettit SR-21, a thin-film, low-copper paint did much better in fresh water than it did in salt. It was almost as potent as the conventional, copper-loaded Super Premium (which has three times the amount of copper). For an eco-friendly, copper-free hard paint, EP 2000 is our pick. Metal boats or outdrives are safe with Pettit Vivid, which was also our best hard multi-season paint as well as the best paint available in white or bright colors. For those wanting easy application, Bottomkote Aqua was the best performing water-based hard paint. For those who want a good hard paint for bottom dollar, Pettit Unepoxy Standard is our Budget Buy.

In general, any of the thin-film paints should do well in a freshwater environment. Pettits SR-21 fared the best in our testing, but we hear from many sailors or are just as happy with Interluxs VC-17. We have not had many reports on Seahawks relatively new freshwater paint, so if you have any feedback on that paint let us know.

If you find that a thin-film paint isn’t cutting it for you, or you plan to do some saltwater sailing in the following year, consider a hard paint. If the boat will be hauled out for a long period, you may have to re-activate the paint by sanding it. Another option in this case, would be to opt for an ablative, recommended in one of our previous tests.