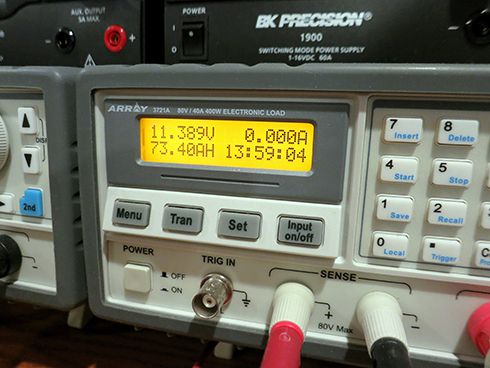 By now, many sailors have enjoyed their first long weekend on the boat this year, and some may have noticed that the expensive absorbed glass mat (AGM) battery they bought last season or the year before isn’t holding a charge like it did when new. There are many things that can lead to reduced battery capacity in an AGM battery, but most often the cause is due to poor maintenance and charging regimen.

Battery manufacturers want their batteries recharged to 100-percent state of charge after each discharge. In reality, few cruising boats (or any boats kept on a mooring) return their batteries to 100-percent state of charge after each cycle. This typical battery use, or abuse, is called partial state of charge operation, and if it continues, a sailor can see his AGM battery perform noticeably worse than a less costly, deep-cycle flooded battery bank. This isn’t the battery’s fault; it is just a lack of understanding of how to properly care for an AGM battery.

In 2015, we carried out a comprehensive update of our 2006 test of sealed valve-regulated lead acid batteries also known as either gel or absorbed glass mat batteries. For the more recent test of partially charged AGM batteries, Rod Collins of Compass Marine and marinehowto.com  cycled five different batteries through 30 deep cycles (to below just 50 percent state of charge) and then put them on the charger for one hour to demonstrate just how quickly a cruising sailor can ruin a good battery. Even after just thirty of these cycles, some of the new absorbed glass batteries in our test never fully recovered to their pre-test capacity.

Here are some tips that came out of our test that can help you prolong the life of your AGM battery.