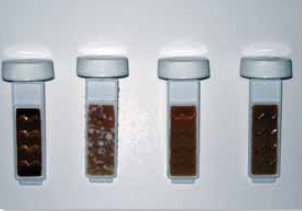 Ordinarily, we don’t enlist animal subjects for our testing at Practical Sailor, but our report of odor-eating chemicals this month called for special measures. Ziggy the iguana stepped up to the plate, and I can assure you he was well treated throughout the process. I had hoped to feature his photo here so that you might admire his healthy green complexion, but he was a bit camera shy, and I couldn't bring myself to use a photo of just any old iguana.

I think youll agree that Ziggy and his owner, contributor Drew Frye, did an excellent job this month unmasking the art of eliminating head odors, probably the most common complaint we hear from owners of newly purchased used boats. Starting on page 22, two articles this month-one on holding tanks and the other on anti-odor agents-are part of a series on fighting head odors. The coverage will continue with Fryes upcoming look at vent filters and sanitation hoses. While we were able to identify some effective chemical treatments, it is important to note that real success addresses all the components in the head plumbing system-from the toilet to the tank. Long porous hose runs are notorious sources of odor.

One of Fryes most interesting findings was that products that claim to use live bacteria to accelerate the natural decomposition of your tanks contents may not be as biologically active as they claim. His repeated attempts to produce live cultures from these additives failed in all but one product, VanishOdor. As it turned out, VanishOdor was also one of the most effective in fighting holding tank odors. Unfortunately, the product vanished shortly before our test was completed. According to VanishOdors Dustin Stroth, the new product just couldn't gain traction. You know times are tough when an effective head odor-eater can’t get off the ground.

The economy hasn’t seemed to stem the flow of iPhone/iPad apps. Every time we try to approach this topic, it seems like were trying to catch the wind. Fortunately, PS got a call from former PS Associate Editor Ron Dwelle last month. Hed recently retired and was ready to tackle some more projects. Dwelles first installment in a three-part report on iPhone/iPad apps appears on page 14 this month. He will be looking at some free and nearly free navigation apps next month. For the final installment, hell tackle the many weather apps as well as some sailing-specific apps that are gaining a strong following.

Dwelle is one of those blessed individuals with boats on either side of the Mason-Dixon line. Summers, he sails a Niagara 35 on the Great Lakes; winters, he cruises a Gulfstar 36 in Florida. Tough duty. All that sailing gives him plenty of time to apply himself to apps. Though were hooked on the power and convenience that the iPad bring to the nav station, PS is still reluctant to endorse these devices in place of marine chartplotters in the cockpit. As many iPad owners have already found out, water damage will void the warranty. On top of that, the visibility on the iPad in the bright sun is mediocre compared to the latest generation of marine chartplotters.

Unfortunately, Dwelle did not discover the one app I had hoped he would, one that would sniff out trouble in a boats plumbing system. It would be nice to have that problem behind us. Im sure Ziggy and the rest of the Frye family would agree.