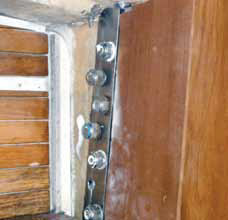 In regards to your search for tough fiberglass boats: I think you should add Rustler Yachts of Britain (www.rustleryachts.com) to the list. They are still being made the same way: hand laid solid fiberglass. In fact, we are having a new Rustler 36 made right now. I am surprised I couldn’t find any mention of these fine quality and affordable yachts in a search of your website and past issues.

Even The Princess Royal (Princess Anne) has owned a Rustler, a 36 like mine, for 30 years, and she is now upgrading to the 44.

Your response to Robert Max about anchor rodes for the Chesapeake Bay (PS, March 2012) left a bit to be desired. We had a 23-foot sailboat that weighed about 4,000 pounds without bodies on board. I quickly learned that 6 feet of chain was not enough. We ended up with 30 feet of chain and a little over 300 feet of three-strand nylon rode.

When we anchored, I could sleep all night without any worries. There are a lot of boats that have dragged on shore here in Colorado because of too little chain and too short of a scope.

As an aside, the first time we launched our boat, I used a nylon double-braid between the hitch and one side of my dual axle trailer tongue and a 3/8-inch three-strand nylon rope on the starboard side. I was amazed that the three-strand nylon had melted when I gently allowed the trailer to back down the launch ramp.

In response to your article on your Ultrasonic Antifouling test (PS, June 2012): Is there any data concerning how ultrasonic noise might affect other marine life? Active sonar has had a huge, and detrimental, effect on marine mammals and possibly other animals. I am skeptical of its actual performance­—sonic bug and rodent repellents didn’t work either. I am also wary of the eco-friendly label without some testing and data.

Good questions. According to the maker of the SmartAntifouling M20 that we’re testing, the ultrasonic spectrum that the product uses is beyond that of marine mammals. Of course, we have not tested this as it’s outside the scope of our evaluations, but we would assume that it is no more harmful to marine life than copper paints. None of our testers have noted any change in animal behavior of marine mammals that have been around the boat (manatees, dolphins, etc.) SmartAntifouling Chief Operating Officer Bob Habib added, “The effect of our equipment is for a 12- to 15-foot radius per transducer… The military sonar range can be in the hundreds of kilometers.” He also explained that using ultrasonic waves is a more eco-friendly than traditional antifouling paints as it does not leach copper or other pollutants into the waters.

In a recent article, you asked for other marine apps available for the iPhone or iPad. Check out “Sea State” on the app store. It measures wave height and wave period using the device’s gyroscope and accelerometer sensors.

In regard to your recent tests of mid-priced VHF radios (PS, July 2012): Why not take your top pick out in real time and compare how different antennas at varying price points affect its performance? I’d appreciate knowing which of the many antennas available provides the most bang for the buck!

We last evaluated VHF antennas in the February 2007 and March 2007 issues, and not much has changed since then. You’ll find the reports online at www.practical-sailor.com.

I was astonished and dismayed by the letter in the July 2012 Mailport about a discovered inflatable PFD flaw, and I felt that your response did not go far enough. An inflatable should be tested when purchased, and at least yearly thereafter. The crucial test is to fully inflate the unit using the oral inflation tube and wait about 24 hours to verify that it holds air.

This is in response to the reader’s question about repairing a broken companionway hatch in the July 2012 PS Advisor. If the hatch is made of acrylic, I believe that it may be possible to satisfactorily repair it.

Acrylic can be solvent welded, and when that is done by an expert, the joint can be virtually undetectable. I would seek an expert in acrylic fabrication, and if I couldn’t find one, I would attempt the repair myself. Not being an expert, I would likely have a less-than-perfect cosmetic result.

We’ll try to test this repair solution. We would be wary of a companionway that is “almost as strong” as the original. An upcoming PS report details the damage done when a Lexan drop-board snapped under pressure.

In response to “Monocular vs. Binocular” in the July 2012 PS Advisor: I’ve been physically monocular since 1971. I’ve tried several times using a monocular on the boat several times over the years, but I choose to use binoculars because having two points of contact with my head makes them much easier to hold steady.

Also, I once got a really good deal on a pair of binoculars with a cracked lens in a pawn shop in Key West. The good lens was on my good side!

The “Is Titanium an Everyman Metal” article (PS, December 2011) hung in my mind while we re-cored our wet deck. The cabinetry around the starboard chainplates was removed for the job, and I noticed the chainplates had tea-colored stains and crud similar to those pictured in the article.

A magnifying lens revealed a micro-crack on each side at deck level! The mast is 80 feet and shrouds are 3/4 inch, so basically, your article saved our butts.

An Internet search showed that Allied was nearly double the best price I found, which was obtained at www.titanium.com in Cleveland, Ohio. (My advice to those buying titanium for chainplate fabrication is to not tell anyone the metal is for a boat.) We paid $202 per plate (each 0.5 x 2.5 x 24 inches) for Grade 5 material. Machining took 12 hours in the MAZAK NC mill by an experienced mill operator (and cost me four cases of beer). Cutting advice and parameters were easily found online. I did the polishing myself. I left the old plates at Torresen Marine for use in their rigging classes.

With regard to your test of holding tank chemicals (PS, February 2012): We’ve been using a product for years called Young Enterprises Microbial Powder (www.young-enterprises.com). We use it regularly, and I know when I forget. When we replaced the blackwater lines a few years ago, we found only a fine black residue and clear liquid—and no smell. This stuff works.

I know you reported that none of the test products had live bacteria that could be cultured, but this one also claims to have bacteria in it. As a molecular biologist by education, I know that culturing specific bacteria isn’t always particularly easy—and just because something won’t culture, doesn’t mean it’s not there.

Young’s Microbial Powder is actually the same product as Clean Water Solutions, which was a PS Recommended product in our March 2006 bilge cleaners test. The company has changed names, but not formulas, and its products can be used in holding tanks to digest odors, or they can be used wherever oil is spilled (bilges, water, wood, concrete, etc.).

We’re testing another batch of holding tank additives, most of which were reader recommended. Look for that report in an upcoming issue.

Several issues back, there was a suggestion of using a stylus with an iPad to eliminate the fingerprints that show up readily on the screens. A better solution is to use the invisibleShield by Zagg (www.zagg.com).

I’ve been using InvisibleShield on my handheld GPS, digital cameras, and cell phones since it first came out, and have been using one on my iPad2 for six months. Fingerprints nearly disappear. (I use my iPad daily, but I only clean the screen about every two to three months.) A few other benefits of the InvisibleShield are scratch and impact resistance. It seems to cut down a little on glare too.